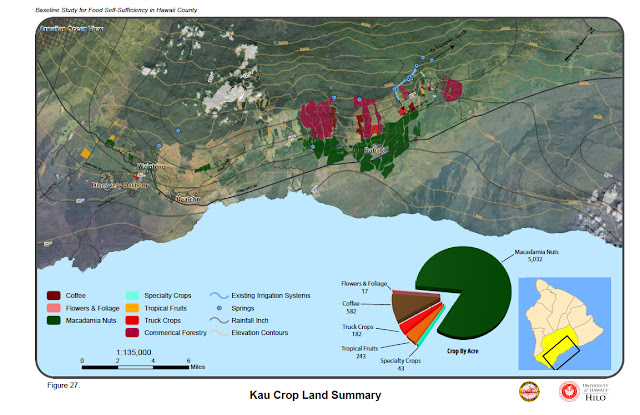 MORE THAN 40,000 ACRES are planted in food on the Big Island, but less that half in crops that make it to the local dinner table. The county’s new Food Self-Sufficiency Report says 17 percent of fresh beef, 32 percent of fruit, 34 percent of vegetables, 51 percent of seafood and 95 percent of fresh milk, consumed here, are produced here.
Land planted for food includes 21,000 acres in macadamia and 6,000 acres in coffee. These farms not only provide some food for the Big Island, they provide jobs for local residents, products that are exported and sold to visitors and a visitor attraction to farms and retail shops.
Mayor Billy Kenoi unveiled the $60,000 report yesterday. At his side were its authors, Donna Delparte of the Geography & Environmental Studies Department at University of Hawai`i-Hilo and Jeff Melrose, of the private firm Island Planning. 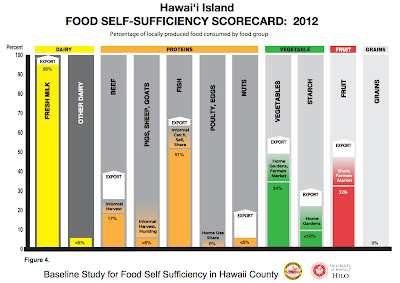 Ka`u and lands just north in South Kona have large tracts in production, most of it in macadamia, owned by Olson Trust, Kamehameha Schools, ML Macadamia and Mac Farms of Hawai`i. This acreage is followed by famous Ka`u Coffee, one of the most successful post-plantation economic developments for family farms in all of Hawai`i.
The report estimates for Ka`u: 582 acres in coffee, 182 acres in truck crops, 5,032 acres in macadamia, 17 acres in flowers and foliage and 43 acres in specialty crops.
The report includes a section on 100 Ways to Increase Food Self-Sufficiency. See the entire document with maps showing ag production on the island at
http://geodata.sdal.hilo.hawaii.edu/techgis/sdal/GEODATA/COH_Ag_Project.html.

DEPARTMENT OF HAWAIIAN HOME LANDS should have received more funding from the state, the Hawai`i Supreme Court ruled in a decision last week. The court did not specify how much funding the state should provide and the case goes back to Circuit Court for additional proceedings and could lead to a trial, state Attorney General David Louie told Civil Beat. Native Hawaiian Legal Corp. filed the case on behalf of six Native Hawaiian clients from the Big Island. It involves the use of Department of Hawaiian Home Lands, which oversees 200,000 acres for homes, farms and ranches for Native Hawaiians. There is a list of 25,000 people waiting, and they are dying on the waiting list, the suit declares. It says the state failed to fund DHHL with sufficent resources to carry out its mandate. See more at civilbeat.com.

SEA TURTLES REMAIN PROTECTED under state and federal law, even though a petition by a community group has been submitted to de-list the green sea turtle as threatened under the Endangered Species Act, according to the state Department of Land & Natural Resources. In Hawai`i, sea turtles are protected by Hawai`i Revised Statutes and Hawai`i Administrative Rules.
The DLNR, U.S. Fish & Wildlife Service and NOAA Fisheries remind the community that while federal and state wildlife conservation laws differ in some respects, all prohibit actions that can harm, injure, kill, or otherwise disturb sea turtles without a permit.
The two types of sea turtles most frequently observed in Hawai`i nearshore waters are green and hawksbill sea turtles. The green sea turtle, Chelonia mydas, is listed as threatened and the hawksbill, Eretmochelys imbricata, is listed as endangered under the Endangered Species Act.
Three other listed species – loggerhead, leatherback and olive ridley sea turtles – generally inhabit offshore environments in the region and are very rarely seen in Hawai`i’s coastal waters.
On Feb. 16, NOAA Fisheries and the U.S. Fish & Wildlife Service received the petition to classify the Hawai`i population of green sea turtles as a Distinct Population Segment and evaluate that population for de-listing under the Endangered Species Act. The petition is under review to determine if it warrants further consideration. If so, a scientific review of the status of the species will be initiated.
If NOAA Fisheries and U.S. Fish & Wildlife propose any changes to the listing status of green sea turtles, public comments will be requested and considered before any final decisions about de-listing are made.
“Even though a petition for de-listing was filed, green sea turtles in Hawai`i remain protected under state and federal laws,” said BLNR chair William Aila, Jr. Sea turtles across the U.S. face threats including illegal harvest, destruction and alteration of nesting and feeding areas, incidental capture in commercial and recreational fisheries, entanglement in and ingestion of marine debris, disease, vessel strikes and climate change.
To address all threats to sea turtles, recovery plans direct research and management efforts for each sea turtle species.
In Hawai`i, ongoing sea turtle recovery activities include efforts to reduce and eliminate direct harvest of and interactions with sea turtles in nearshore and commercial fisheries; eliminate the threat of fibropapilloma (a tumor disease that can be harmful to sea turtles); protect important nesting and feeding areas; and reduce impacts from boat strikes, disturbance and marine debris.
To report a sea turtle in distress, call 808-983-5730 or visit NOAA’s sea turtle stranding website at www.pifsc.noaa.gov/psd/mtrp/turtle_contact.php.
See more at  www.hawaii.gov/dlnr , www.fpir.noaa.gov and www.fws.gov/pacificislands/teslist.html.

OCEAN VIEW COMMUNITY ASSOCIATION’S monthly BBQ is tomorrow from 2 p.m. to 5 p.m. at the community center. The BBQ replaces the monthly pancake breakfast.

A HIKE TOMORROW at the Kahuku Unit of Hawai`i Volcanoes National Park focuses on the area’s human history from the earliest Hawaiians through today. The guided, two-mile, moderately difficult hike crosses rugged terrain exploring pastures, a quarry, an airstrip and 1868 lava fields. The gate opens at 9 a.m., and the three-hour hike begins at 9:30 a.m.