RANGER KUPONO MCDANIEL WON the Merrie Monarch Beard Contest yesterday. “Kupono” is known in Ka`u for his effort in producing a ranger program for high school students that has led to summer internships and employment at Hawai`i Volcanoes National Park where he works.
He not only grew the beard but dressed for the competition like King Kalakaua, the Merrie Monarch, famous for bringing hula and Hawaiian music back into the life of the Hawaiian people. Kupono said he decided to grow his beard after he saw the announcement of the Kalakaua look-alike contest. “I've always loved the Merrie Monarch, but I don’t dance.” He began growing and trimming, and when he saw a Kalakaua image that showed a fluffy beard, Kupono quit trimming. Last Saturday, he said, he decided to search for adornments to look more regal. He and his six-year-old daughter, Kamele, searched the Salvation Army and other Hilo thrift shops and came up with two pairs of earrings he used to depict Kalakaua’s medals. They also found two broaches. A friend made a sash, and Kilauea Drama & Entertainment Network loaned him a red jacket.
Kupono said that acting “is pretty out of character for me. I just knew I could grow beards better than I could dance.” Kupono has been on the Big Island for more than 20 years and graduated from University of Hawai`i - Hilo after becoming involved with internships at the National Park Service. He has been working at the park since then and holds a new title as Youth and Volunteer Program Coordinator.
The first King Kalakaua Beard and Look-Alike Contest was held in 1964 and won by a Parker Ranch cowboy, David Kaula, Jr. A three-time winner, Adam Quinores, now 79, also competed yesterday and came in third. There were 23 contestants in this competition, which was retired for years and brought back to celebrate the 50th Anniversary of the Merrie Monarch Festival.
Kupono won $600 and prizes, including a $50 gift certificate from HPM.
Merrie Monarch arts and crafts events and the Ho`oike begin tomorrow, followed by Miss Aloha Hula on Thursday and men’s and women’s traditional and modern hula competitions on Friday and Saturday, televised and online through KFVE. The Merrie Monarch Parade is Saturday in Hilo.

KA`U COMMUNITY DEVELOPMENT PLAN draft materials were released this morning by the county Planning Department. A statement from Planning invites the public to review them at www.hawaiicountycdp.info/kau-cdp/draft-planning-documents/cdp-outline-with-links-to-draft-documents-and-feedback-forms. 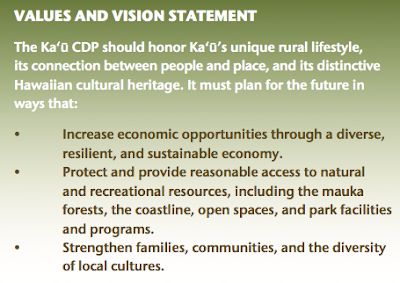 The statement from planning says, “Of particular interest is Appendix V4A Natural and Cultural Resource Management Analysis.” For each of Ka`u’s four resource management priorities – shoreline, agricultural land, mauka forests and cultural resources – the appendix does three basic things: outlines existing policy, summarizes related planning initiatives and introduces alternative strategies available to achieve Ka`u’s community objectives. Other elements of the CDP appendix are also available for public review and comment, including the CDP Purpose and Scope and the Planning Process.”
The planning department asks the Ka`u public to “Please note that Appendix V4A does not include the policies and plans of action that will make up the heart of the CDP. Note also that Appendix V4A is not designed to be read from start to finish. Consider reading through page 14 and then using the tables of contents, figures, and tables to find material of greatest interest.
Hard copies of the materials are available in Ka`u at:
Hard copies are also available in the Kona and Hilo Planning Department offices.
“The draft materials are works-in-progress,” said planner Ron Whitmore. “It is expected that they will be revised as conditions change and new information becomes available. Feedback, suggested additions, updates and corrections are welcome and encouraged.” Feedback forms are available through a link on the website.

KA`U COMMUNITY DEVELOPMENT PLAN STEERING COMMITTEE will convene Tuesday, April 9 at Pahala Community Center. The Steering Committee will discuss the draft materials. Like all CDP meetings, the 5:30 p.m. meeting is open to the public, and comment on agenda items is invited.
The April 9 Steering Committee meeting is a business meeting focused on agenda items. “Hot topics” in Ka`u are not on the agenda and will not be discussed. “Please direct comments about these issues to the appropriate party,” says the announcement from the county planning department. “As always, refer to www.kaucdp.info for more information, and don’t hesitate to let Steering Committee members, Community Planning assistant Nalani Parlin, or me know if you have any questions,” said Whitmore.

SUGGESTIONS FOR PRESERVATION PROPERTIES are welcomed by the County of Hawai`i Public Access, Open Space and Natural Resources Preservation Commission. According to a statement from the county this morning, it “is inviting the public to submit suggestion forms for properties to be included in its annual prioritized list and report to Mayor Billy Kenoi.” Suggestion forms can be downloaded from http://hawaiicountymayor.com/wp-content/uploads/2013/04/2013-01-14-PONC-Suggestion-Form-fillable.pdf or by obtaining a form at the Property Management Division, County Building on 25 Aupuni Street, Suite 1101. Completed forms can be mailed or e-mailed to the addresses listed on the form. Suggestion forms are due by the last business day of June, which in the current year is June 28.
Past purchases, which total nearly 1,000 acres, have included Waipi`o Lookout in Hamakua; Kawa oceanfront parcels in Ka`u; Kaiholena and Pa`o`o oceanfront parcels in North Kohala; and the Kingman property (across from Magic Sands Beach) in Kona. PONC funds are generated from two percent of Hawai`i County’s annual real property tax revenues.
Other Ka`u properties that have been suggested in the past include thousands of acres around Road to the Sea and the slopes and more than a thousand acres below Honu`apo Lookout toward South Point.
There are nine PONC commissioners that represent each of the nine County Council districts on Hawai`i Island. The District 6 representative of lands between Volcano and South Kona is Marilyn Nicholson, of Volcano. These commissioners meet every other month rotating between the Hilo County Building and West Hawai`i Civic Center. Public testimony is allowed during each meeting. Commissioners review the current submittals and consider the significant factors of each property that may include historic and culturally important features; public outdoor recreation and education; public access to beaches or mountains; preservation of forests, beaches, coastal areas, and natural beauty; protection of natural resources and watershed lands; and the general benefits to the public. The potential acquisitions are then prioritized, and the list and accompanying report is sent to the mayor at the end of the calendar year. The mayor then forwards his recommendations to the Council, where resolutions are passed to purchase the properties.
For further information, contact Alexandra Kelepolo of the County of Hawai`i Property Management Division at 961-8069 or visit the website at: http://www.hawaiicounty.gov/boards-and-commissions.

ALSO SEE KAUCALENDAR.COM AND FACEBOOK.COM/KAUCALENDAR.
Posted by The Ka`u Calendar at 5:26 PM Links to this post