THE KA`U DISTRICT GYM & SHELTER contract has been awarded for $17 million to Summit Construction, of Aiea on O`ahu. According to a release from the County of Hawai`i yesterday, construction is scheduled to begin in September and last 18 months.
Location will be on the Ka‘ū High & Pāhala Elementary school campus in the large field makai of the main school building on the Volcano side of the cafeteria and elementary building. The facility will take up approximately 43,300 square feet in two buildings, one primarily for the gymnasium, and another for a recreation center. It will be operated and maintained by the County of Hawai`i Department of Parks & Recreation and provide space for both sheltering the public during a disaster, and for school athletics, community sports and other recreational activities.

The 43,300 square-foot facility will be constructed to “Enhanced Hurricane criteria,” the county press release states. While the main building, which is to serve as the primary disaster shelter, will include air cleaning equipment for vog, the release states that “in acknowledgment of Ka`u’s proximity to vog emissions, the multipurpose room and recreational room are provided with filtration systems and can serve as a shelter when there is an increased level of volcanic discharge in the area's atmosphere.” The two rooms with filtered air during volcanic emission events could handle a total of 318 people for a short-term stay, according to David Yamamoto, county planner for the facility. 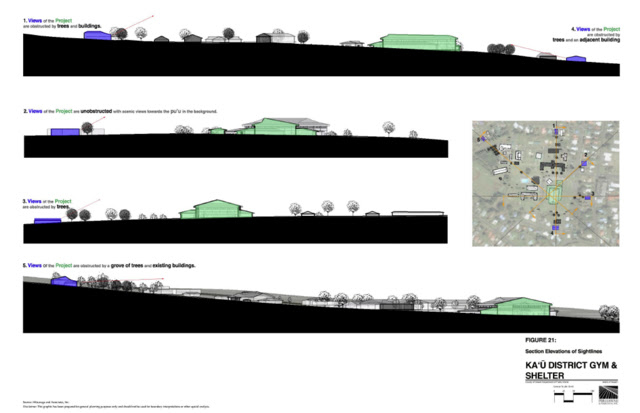 The size and diversity of the facility is in direct response to comments gathered in November and December from the community, said Mayor Billy Kenoi. “The Ka`u District Gym & Shelter has been designed to expand athletic and recreational opportunities, serve as a destination for community events and emergency shelter during natural disasters."
The gym will accommodate three regulation HHSAA basketball or volleyball courts, and will host the Big Island Interscholastic basketball and volleyball games. Accessory rooms will include: locker and training rooms, and restrooms; a lobby, courtyard, certified kitchen, and ticket booths; office space and storage areas for the state Department of Education, county Department of Parks & Recreation, and the American Red Cross.

Mary Correa, Complex Area Superintendent of Schools for the Ka`u – Kea`au, Pahoa Complex Area, said, “We are appreciative of the partnership between the County of Hawai`i, the Department of Education Facilities Section Duane Kashiwai, Nick Nichols, Tracy Okumura, Ka`u High Principal Sharon Beck and Athletic Director Kalei Namohala. They worked diligently and quickly to figure out what was needed to award a construction contract before the fiscal year ended in June. We are also grateful to state Sen. Gil Kahele and state Rep. Bob Herkes for securing funding for a new gym and shelter in Ka`u District. Our students and the community are excited to have a new gym in their midst and continue to dream of possibilities once it is completed."

Gov. Neil Abercrombie recently told The Ka`u Calendar that he is proud that releasing the funding for the gym was one of his first actions for Ka`u as governor. He said he hopes to visit the area again soon. A groundbreaking will be held prior to the start of construction. Releasing the gym funding was also one of the first efforts by Ka`u County Council member Brittany Smart. She asked the governor to release the funds the first time she met him after the election. Sen. Gil Kahele and Rep. Bob Herkes also helped with funding.

The acquisition of money for the gym followed an effort led by former County Councilmember Guy Enriques, in cooperation with the Pahala School principal. Enriques, who runs volleyball tournaments on the mainland each summer and takes local students to volleyball events across the country, said he hopes to bring volleyball tournaments to Pahala.
Ka`u Coffee Growers Cooperative President Gloria Camba said she looks forward to the day when the Miss Ka`u Coffee Pageant can also be held in the gym.

IS ARSON THE REASON for six fires between June 14 and last Sunday around Pahala? The county fire department, landowners, fire officials and police are looking for clues. One fire burned 4,800 acres makai of Hwy 11 blazing through and around the floor of macadamia nut orchards and windbreaks and makai into the Ka`u Desert. Since the fires, winds have churned up dust and ash creating storms of particulates blowing across Hwy 11 mauka to Makanau and covering Pahala and surrounding farms and ranches with dust, dirt and ash. A mauka fire burned 400 acres in Pear Tree coffee farms and surrounding eucalyptus groves. Another burned 200 square feet at the Pahala Transfer Station and another more than 60 acres between Hwy 11 and Pahala Transfer Station. The most recent burned on the old cane haul road at Makanau.
Anyone with clues on possible arson connected with any of the fires can call the police non-emergency line at 935-3311 or anonymously to Crime Stoppers, 961-8300. An award of up to $1,000 is offered.

ML MACADAMIA ORCHARDS, L.P. has announced it has signed a nut processing agreement with Buderim Macadamias of Hawai`i, LLC, which also owns MacFarms. The agreement provides that Buderim will process between 1.5 million and 7 million pounds of wet-in-shell macadamia nuts into kernel for the partnership during 2013. The wet-in-shell nuts will be available as a nut purchase contract with Mauna Loa Macadamia Nut Corp. covering a portion of the production, the partnership expires Dec. 31, 2012.

The partnership intends to use the kernel processed by Buderim to launch the partnership’s new Royal Hawaiian Orchards product line. The partnership has also signed an amended credit agreement with American AgCredit PCA, its primary lender, extending its current $5.0 million revolving credit facility until May 1, 2014.
The term loan with American AgCredit with a balance of $8.4 million outstanding as of June 30, 2012 and the revolving credit facility continue to be secured by the partnership’s owned real property.
ML Macadamia Orchards, L.P. describes itself as the world’s largest grower of macadamia nuts, owning or leasing 5,070 acres of orchards on the Big Island.

KA`U AGRICULTURAL WATER COOPERATIVE meets today at 4 p.m. at ML Macadamia office in Pahala. Anyone interested in water for farming and ranching or joining the coop. can contact Jeff McCall at 928-6456 or mccalljeffreyw@gmail.com.

Posted by The Ka`u Calendar at 9:13 AM Links to this post