ALL OF THE KA`U COUNTY COUNCIL CANDIDATES marched the Independence Day Parade in Na`alehu yesterday and attended the candidates’ forum at Ocean View Community Center Friday.


BRENDA FORD talked about the Ocean View trash processing station. “What’s holding it up is money.” She said it was top on the list until another transfer station collapsed and had to be replaced. She said it is next. She said she is not happy with taking on debt for the county but suggested that a bond could help pay for the Ocean View facility, which could include recycling and composting. She predicted the county “will never get to zero waste, but we can get to five percent.” She also talked about the Council receiving a lot of proposals on handling waste. “One is a Material Recovery Facility, which employs intensive reuse and recycling principals. She said one is likely to be built near Kona.

MAILE DAVID said the trash recycling and transfer station for Ocean View is critical for health and welfare. “Whoever gets in office needs to really bird dog and work with state representatives to resolve whatever is holding it up.” David said her proudest achievement is “coming to realization that my 30 years of community activism and community service has brought me to where I am today.” She sued and stopped dredging of shoreline at Kukui, where “they were doing it over the weekend” without permits. She said within the “beautiful reefs,” remnants of ponds they were attempting to dig can be seen. She also litigated to preserve a historic site in Kona, resulting in it being purchased for $600,000.


LEE MCINTOSH said he is “a problem solver. I can identify problems and listen to problems other people have identified and look for solutions that best meet the end result that we want to accomplish.” He said, “I will work hard to represent constituents in my district and do my best to follow through. McIntosh noted the parade he and his family organized for yesterday’s Independence Day in Na`alehu. Three years ago, he and his family “were waiting for them to do the parade. I found out that they weren’t going to do it. My family scrambled to figure out the process and worked with the county and Police Department.” He said his family continues to organize the parade through `O Ka`u Kakou.

BRADLEY WESTERVELT said he supports farm-to-table initiatives and that it is a “tragic thing we have to import so much food.” He noted that he has worked on sustainability for the island and supports building code modification to allow the use of such materials as `ohi`a and lava rock. He works with the Hawai`i Sustainable Community on modifying the building code. Westervelt also said he worked on the Ocean View temporary transfer station and called the disposal situation a tragedy with Ocean View residents driving far to get rid of their garbage. He suggested opening the transfer station north of Ocean View more hours a week so people can dispose of their trash on the way to work in Kona.

ANTONIO ROCHA brings the sights and sounds of Brazilian and African rainforests to Ka`u in his solo shows at local libraries tomorrow. Rocha performs at Na`alehu Public Library at 9:30 a.m. and at Pahala Public & School Library at noon. All ages are welcome. 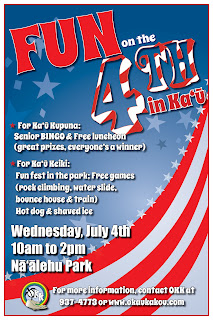 KILAUEA MILITARY CAMP celebrates Fourth of July with a Country Hoedown & Western Dance
Party at Lava Lounge in Hawai`i Volcanoes National Park with BBQ pork on a hoagie bun, corn, baked beans and warm buttermilk biscuits for $10 from 5 p.m. to 7 p.m. The Dance Party is set for 7 p.m. to 11 p.m., with no cover charge. Open to authorized patrons and sponsored guests. Park entrance fees apply. Call 967-8371 for more information.

SEE OUR SPONSORS AT PAHALAPLANTATIONCOTTAGES.COM AND KAUCOFFEEMILL.COM.

Posted by The Ka`u Calendar at 10:59 AM Links to this post