THE FIRE MANAGEMENT TEAM at Hawai`i Volcanoes National Park has planned a controlled burn today at Kealakomowaena, near the bottom of Chain of Craters Road. The 130-acre burn will regenerate the growth of native pili grass and other indigenous plant species. An eight-person fire crew will administer the controlled burn, which is expected to last all day. No closures are planned, and park visitors and normal park activities will not be impacted. Visitors may stop and watch the controlled burn taking place throughout the day at a pullout along Chain of Craters Road at the top of the Holei Pali. “These types of prescribed burns are beneficial as they fortify the cultural landscape by stimulating the growth of native vegetation,” said Fire Management officer Joe Molhoek. 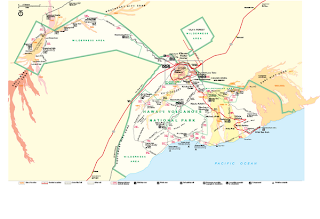 OPTIONS FOR A NEW MANAGEMENT PLAN FOR Hawai`i Volcanoes National Park are going before the public next week in talk story sessions. The Park’s website describes the Management Plan as “a guidebook for the future to help managers make decisions about how to protect resources, what levels and types of uses are appropriate, what facilities should be developed and how people should access the park.” The park aims at implementing the new General Management Plan by 2013.
The talk story sessions will be from 6 p.m. to 8 p.m. Monday, Aug. 22 at Kilauea Visitor Center, Tuesday, Aug. 23 at Pahoa Community Center, and Wednesday, Aug. 24, at Na`alehu Community Center. Options include more recycling and self-sustaining, enhancing communication with the community to tackle issues, preserving Kahuku, high-level trails linking upper slopes of Kahuku on Mauna Loa with the Mauna Loa Wilderness, more money for restoration, and a coffee house and restaurant in Kahuku.
The current General Management Plan was adopted over 30 years ago. Since then, the park has more than doubled in size, and visitation has grown with Hawai`i Volcanoes National Park becoming one of the most visited places in all of Hawai`i.
The park asks for comments to be sent by Sept. 30 online by going to http://parkplanning.nps.gov/havo or by mail to Cindy Orlando, Hawai`i Volcanoes National Park, P.O. Box 52, Hawai`i Volcanoes National Park, HI 96718.

KA`U LANDOWNER AND PHILANTHROPIST EDMUND C. OLSON has donated $500,000 to The Nature Conservancy to protect native forests of Ka`u and South Kona, which provide critical habitat for many of the island’s endangered forest birds. The Nature Conservancy hailed Olson as “quietly becoming one of the state’s leading conservationists.” In 2009, Olson helped acquire 6,500 acres in the Waianae Mountains on O`ahu from the James Campbell Company to keep the land in agricultural and preservation. Olson gave part of this land to the state to create the Honouliuli Forest Reserve.
He also put more than 900 acres mauka of Honu`apo into permanent conservation easements to prevent development, including multiple residences, commercial structures, roads or power lines, The Nature Conservancy statement says. The easements also safeguard the property’s numerous cultural sites and pockets of healthy wildlife habitats. They are managed by the Hawai`i Islands Land Trust.
This was the second time Olson has helped preservation interests in the Honu`apo ahupua`a. In 2006, he donated $50,000 through the Trust for Public Land to protect the area’s historic fishponds and acquire lands around Honu`apo to be put into public ownership.

Olson also supports the macadamia and coffee industries and leases out land to farmers for diversified agriculture. He is currently completing a coffee mill on Wood Valley Road.

PRESIDENT BARACK OBAMA lent his support for biofuel this week at the White House Rural Economic Forum. The federal government plans to invest $510 million in biofuel development over the next three years. It is uncertain whether any of this money will go to biofuel developments in Hawai`i. An announcement from the White House says the investment “will create jobs and economic opportunity, improve our national security by reducing reliance on foreign oil, and demonstrate advanced technologies and American ingenuity.” Read more at: http://www.whitehouse.gov/blog/2011/08/17/investing-advanced-biofuels-create-jobs.

THE HIGH COST of biofuels is a topic in the August edition of the magazine Scientific American. “Despite extensive research, biofuels are still not commercially competitive,” said Scientific American in a story titled The False Promise of Biofuel. According to the report, corn ethanol has failed to live up to its expectations because of its high cost and need for government subsidies.
Scientists and investors are turning to alternatives. Cellulose ethanol uses corn stalks and grasses, but requires a long time to break down the material. Oil from algae produces a lot more energy than corn, but algae’s natural processes interfere with the rate it produces oil. Some scientists are focusing on genetically modifying algae and bacteria to make them more productive. The process is very complex and still in the research stage.
Not covered by the article is using microwaves to process biomass into biofuel. Biofuel developer `Aina Koa Pono plans to operate microwave reactors in its proposed refinery in Ka`u. `Aina Koa Pono has stated that microwaves are much more efficient and less costly than the processes used to make ethanol.
A public meeting organized by `Aina Koa Pono and County Council member Brittany Smart concerning the `Aina Koa Pono plan for a refinery near Pahala and biofuel farm between Pahala and Na`alehu will be held on Monday, Sept. 19 at 6:30 p.m. at Pahala Community Center.

BURGLARS REPORTEDLY TOOK NUMEROUS ITEMS from a ranch off South Point Road sometime between June 15 and June 19. Stolen items include a red Toyota Tacoma pickup truck without a bed, license plate MAD259; a red-and-white Honda XR250 dirt bike; a red Honda XR100 dirt bike; a tan Honda Four Trax 400 all-terrain vehicle with a heavy-duty steel rack; a green 300-gallon plastic Chemtainer water tank with a repaired crack and the word “repair” written nearby; a green 2,500-gallon plastic water tank with white lettering spray-painted on the side; and an aluminum truck bed tool box with a silver diamond pattern containing sockets, pipe wrenches, grinders, hammers and miscellaneous fencing and plumbing tools.
Anyone with information about the burglary or the location of any of the stolen items is asked to call the police non-emergency line at 935-3311.

COOPER CENTER IS THE START AND FINISH POINT for the second annual Rain Forest Runs sponsored by Volcano Art Center tomorrow morning. The 5K and 10K participants weave through the lush native rain forest on the mostly flat, tranquil streets of Volcano Village, while the half marathon will continue into the more hilly surrounding upper ranch lands with views of Mauna Kea and Mauna Loa.
Packet pick-up and late registration is today from 2 p.m. to 6 p.m. at Kilauea Military Camp’s Ohia Room. A carbo-load buffet is available at KMC’s Crater Rim Café from 5 p.m. to 8 p.m.
Registration for the 5K and 10K races is also available tomorrow morning from 5:30 a.m. to 6:30 a.m. Also, keiki ages 1 to 7 can register for the free 100- and 200-yard dashes until 9:30 a.m.
For more information, call 967-8240 or 967-8222 or visit volcanoartcenter.org.

TROPICAL STORM FERNANDA was about 700 miles east-southeast of South Point this morning. The storm was moving west at 12 mph. Wind speeds were estimated at 40 miles per hour. Fernanda continues to weaken and is forecast to pass south of the Big Island on Monday. Fernanda does not presently pose a threat, and there are no special advisories at this time. This storm is being closely monitored, and updates will be issued every morning or as conditions change.

KA`U PLANTATION DAYS, tomorrow in Pahala, will bring together not only many people from many communities with stories of the past, but many maps, books, photos, charts and other documents from the many ethnic communities who settled here. One special request is for people to bring in any old photos of school gardens of Pahala and Na`alehu.
An old sugar cane truck will be fired up and on display. Displaced sugar worker Manuel Marques, who operated a crane at the sugar mill, will show off his new business, growing and selling Ka`u Coffee. He will serve it to the public and talk about his transition from sugar to award-winning Ka`u Coffee.
The event will be held at Pahala Plantation House from 9 a.m. to 3 p.m.
2011 marks the 15th anniversary of the closing of the Ka`u sugar mill. The anniversary will celebrate history of the plantation and the evolution of agriculture in Ka`u. Lunch will celebrate the town’s diversity with Filipino, Hawaiian, Portuguese, and Japanese food. Displays of Chinese life and the other ethnic groups form the town will be at stations around the yard and in the house. There will be Portuguese and Filipino dancing and singing throughout the day, a video on the last cane harvest in Pahala and a slide show of old photos from plantation days.
Visitors to Plantation Days will also be able to take a tour of the new Ka`u Coffee Mill during the afternoon.