NAVY SONAR TRAINING EXERCISES ACROSS 120,000 square miles of Pacific waters, from Hawai`i to Southern California, received a thumbs down yesterday for a five-year permit. It was an attempt by the California Coastal Commission to mitigate impacts on marine mammals.
However, the same California Coastal Commission turned down the Navy permit in 2007, and the Navy carried on, leading to a federal lawsuit.
Coastal Commissioner Jana Zimmer told Navy representatives meeting in San Diego on Friday: “I understand you see this 120,000-square-mile range as your theater, but the bottom line is we don’t see it that way. That theater is occupied by creatures of the sea.” Regarding marine protected areas, she said, “you need to start looking at this theater as a theater where some of the seats are reserved.”

While there is no such obligation in Hawai`i, in California the Navy is required to apply to the Coastal Commission for use of waters for war games. The commission asked the Navy for more proof that sonar technology and explosives have small impacts on marine mammals, such as dolphins and whales.
Environmental groups contend that Navy sonar affects marine mammals’ own sonar, used to locate food and mates, that explosives damage their hearing, and that both can lead to deaths and injuries.
The Navy’s latest training plan predicts as many as 130 marine mammal deaths and 8.8 million impacts by Navy actions over the five-year period. The hours of training proposed are increased over previous plans, and the Navy reports considering a larger geographic area for training to ensure readiness for the Pacific Ocean. The Navy pointed to danger looming with the Chinese military buildup and from North Korea, which this week threatened a pre-emptive nuclear strike on the U.S. The Navy testified it needs the sonar exercise to test new equipment, in particular for detecting mini and large “quiet diesel-electric submarines.”
The Natural Resources Defense Council testified that the Navy expects 13 times more impact on marine mammals through its military exercises than estimated in earlier plans.
The Defense Council website states that “when a sound thousands of times more powerful than a jet engine fills their ears, the results can be devastating -- and even deadly. “This is the reality that whales and other marine mammals face because of human-caused noise in the ocean, whether it’s the sound of airguns used in oil exploration or subs and ships emitting sonar. Manmade sound waves can drown out the noises that marine mammals rely on for their very survival, causing serious injury and even death.”
To mitigate effects on marine mammals, the Coastal Commission staff proposed that the Navy shut down war games when marine mammals or sea turtles are detected by blacking out areas of up to two kilometers offshore; blackout areas for sonar use in marine sanctuaries, and those protected and coastal areas with such rare species as bottlenose dolphins; reduce emitting sounds at night and when visibility is low; reduce speed in sensitive areas to 10 knots when possible; improve training for marine mammal spotters aboard Navy ships; and create a contingency plan for near-shore explosives, should additional marine mammal deaths occur.
Members of the Audubon Society, Greenpeace, the Sierra Club and Surfrider Foundation also attended the meeting in San Diego.

PROTECTING THE WATERSHED went unfunded in the state House of Representatives state budget passed by its Finance Committee this week. Finance chair Sylvia Luke said, however, that the committee is still looking for money, perhaps through the general fund or by issuing bonds. Gov. Neil Abercrombie had proposed an increase in the conveyance tax levied when real property changes hands – limited to properties valued at more than $2 million. He said the tax would generate an estimated $10 million for watershed protection. He also proposed a 10-cent fee for single-use checkout bags to go into the natural area reserve fund, estimating income of $15 million. Neither have traction in the 2013 Legislature.
In his State of the State address on Jan. 22, Abercrombie said: “If we are going to nurture and expand our local agriculture – if we are going to be talking about how we meet the challenges of the 21st century and ensure that we perpetuate ‘our’ Hawai`i, its natural beauty and environment – the question is what must we do keep our watershed areas protected. The Department of Land and Natural Resources Watershed Initiative remains a top priority.
“Our forests can capture and collect up to 50 percent more water than through rainfall alone.  When forests disappear, Hawai`i shrinks its source of water. In the last 200 years, more than half of Hawai`i’s forests have been lost. The longer we wait to take significant action, the higher the cost will be to reverse the damage, thereby threatening water supplies for future generations.
“I thank the Legislature for providing funding last session. But what we need is a sustainable and ongoing source of funding. I will be asking the Legislature to look at alternative methods of funding this critical initiative.

GOV. NEIL ABERCROMBIE yesterday announced the release of more than $46.39 million for various capital improvement projects across Hawai`i, including investments required to qualify for federal funding toward state projects. “Many of these priority projects require matching state funds to access federal dollars, secured before sequestration, to maintain and upgrade our public infrastructure and facilities,” Abercrombie said. “These CIPs will have the added benefit of stimulating Hawai`i’s economy and generating local jobs. Priority has been given to projects that can begin quickly.”
Allotment of funds for the following priority projects, identified by members of the state Legislature, has been approved by the governor:

FRIENDS OF HAWAI`I VOLCANOES NATIONAL PARK explore Pu`u Pua`i area on an easy-to-moderate hike of about three miles. Non-members can join the nonprofit organization in order to attend. Call 985-7373 to join.

PEOPLE AND LAND OF KAHUKU, a guided 2.5-mile hike over rugged terrain, focuses on the human history of the Kahuku Unit of Hawai`i Volcanoes National Park tomorrow from 9:30 a.m. to 12:30 p.m. 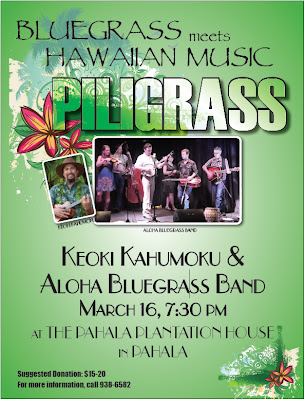 HAWAI`I WILDLIFE FUND holds a Ka`u Coast Cleanup next Saturday. Volunteers can sign up with Megan Lamson at 769-7629 or kahakai.cleanups@gmail.com.

A VOLUNTEER FOREST RESTORATION PROJECT next Saturday takes place in the Mauna Loa strip section of Hawai`i Volcanoes National Park. Pre-registration is required at 352-1402 or forest@fhvnp.org.