GREEN INFRASTRUCTURE BONDS issued by the state could bring in capital at low interest rates for a fund to lend money to businesses and residents to buy photovoltaic systems for electricity. The PV systems would be financed through electric bills. The Public Utilities Commission would need to approve the program.

Last Friday, Senate and House bills that would establish a regulatory financing structure to authorize the PUC and Department of Business, Economic Development & Tourism to provide the low-cost loans for green infrastructure equipment passed the House Finance Committee, with East Ka`u Rep. Richard Onishi and the rest of the committee voting for it unanimously. In the Senate Ways & Means Committee, east Ka`u Sen. Russell Ruderman and former Ka`u Sen. Gil Kahele voted for the measure.
Testifying for the measure was Hawaiian Electric Co. and its subsidiaries Hawai`i Electric Light Co. and Maui Electric Co. Alan Hee, director of New Energy Initiatives for HECO, said utilities support the measure “that will provide low-cost, clean energy financing to underserved markets. The companies have also supported on-bill financing during the proceeding at the (Public Utilities) Commission in which the compa in strong support,” saying it will “empower ratepayers at every household income level to reduce their energy costs, catalyze those savings by leveraging the power of private investment, without creating a new obligation on the state budget and improve our economy by reducing the amount of money sent out of Hawai`i to pay for imported fuels.”
Blue Planet’s testimony says that “on-bill financing overcomes the biggest hurdle to energy efficiency and clean energy: the upfront cost. By eliminating the initial cost and enabling ratepayers to pay off the investment from energy savings over time, adoption of efficiency and clean energy will accelerate.”
The Sierra Club also testified that it “strongly supports” the measure, “which would help many Hawai`i residents reduce their electric bill through clean energy and energy efficiency investments. Until we solve the problem of upfront cost, it will be difficult to provide clean energy to renters and low-income residents. Our society has evolved into a pay-as-you-go system. No one would consider paying $19,200 for 20 years of cell phone service, although that is the approximate cost of a modern iPhone ($80 per month X 12 months X 20 years). Similarly, too few people are willing to pay $42,000 for a clean energy system that locks in today’s energy rates (average bill of $175 X 12 months X 20 years).”
The Sierra Club contends that “analogous financing systems have led to demonstrable increases in employment and overwhelming public support. The small county of Sonoma (California), for example, has already invested a total of $59,756,859 in stimulating the economy and reducing electric bills. Eighty-six percent of these jobs were completed by local contractors.”
According to a story in this morning’s Honolulu Star-Advertiser, state Department of Business, Economic Development & Tourism chief Richard Lim pointed out that most of the PV systems have been installed by business owners and residents with capital. “Let’s face it, solar has been for the more advantaged. We’re targeting the underserved market, renters, non-profits, churches and homeowners who don’t qualify for solar,” he told reporter Alan Yonan, Jr.
Lim, who was founding partner in Sennet Capital, which lists the proposed `Aina Koa Pono refinery and biofuel farm in Ka`u as one of its transactions, was president of CitiBank (Hawaii`i) from 1999 until 2004.
In the Star-Advertiser story, Lim noted that it has been difficult for those without very good credit to invest in or lease PV. “The typical solar lease, which is a huge part of the market right now, requires at least a 700 FICO score. If your credit score is 700 or above, you pretty much get the lease. Below 700, sorry,” Lim told the Star-Advertiser reporter. He said the financing becomes more secure with on-bill financing, which Lim calls “a powerful mechanism to incent repayment. You pay your utility bill before you pay your mortgage.”

ALL WATER SPIGOTS at Ocean View county fill station are shut down. According to the Department of Water, the residential spigot was closed Saturday evening when supplies started running low, following the shutdown of commercial water hauling last Monday. The shutdown was caused by malfunction of the pump at the bottom of the well. The county has signed an emergency repair contract with Hawai`i-based contractor Beylik Drilling and Pump Service. 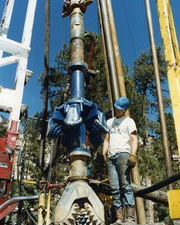 Beylik mobilized its equipment to the site over the weekend and plans to pull the pump at the bottom of the well by Wednesday. The pump will either be repaired or replaced, said water department officials.
Since Saturday, all water stored from the well has been reserved for maintaining a minimum level of flow to the Ocean View hydrant near the fill station. Ocean View fire station has been notified that reliance on alternate water resources should be included in their plan.
The length of the shutdown depends on repairs needed once the pump is brought to the surface.

DRAFT MATERIAL FOR KA`U Community Development Plan, which was released last week, discusses Ka`u’s natural and cultural resources. The material details the significance of Ka`u’s wao, or mauka forest resources, including the summits of both Mauna Loa and Kilauea as well as the Ninole volcanic series composed of the prominent hills of Makaalia, Kaiholena, and Pu`u `Enuhe.
It describes high-level groundwater aquifers, which correspond roughly with Ka`u’s watersheds, that are charged with precipitation in the mauka forests. It explains that this groundwater is perched on ash beds in the Wai`ohinu to Ka Lae area, and basal groundwater with freshwater is found above 2,000’ elevation. In central and west Ka`u, small springs discharge from perched groundwater, and perched water has been tapped throughout Ka`u via tunnels for irrigation.
It describes “high biodiversity richness” in the mauka forests, including critical habitat for many rare and endangered species like the `Io (Buteo solitarius, Hawaiian Hawk), Hawai`i Creeper (Oreomystis mana), akepa (Loxops coccineus coccineus, Honeycreeper), and `ope`ape`a (Lasiurus cinereus semotus, Hawaiian hoary bat).
Both traditional and more contemporary cultural practices continue to be perpetuated mauka, the material states. It describes the forest as a place to gather plants such as maile, mamaki, palapalai, `a`ali`i and `olona. Wai (water) is also collected from springs and used for ceremonial purposes.
It describes hunting as a deep-rooted cultural practice and a means of subsistence. “For many, hunting (and fishing) is an essential element of being a real kama`aina of Ka`u,” it says. “Hunting is a rite of passage, a bonding time among the densely interwoven network of friends and family, a treasure trove of stories for retelling, and a tradition that the community feels needs to be protected for many reasons.”
Ka`u CDP draft materials will be discussed at the Steering Committee meeting tomorrow at Pahala Community Center beginning at 5:30 p.m. The time is a correction from earlier reports, including the April issue of The Ka`u Calendar.
Draft Ka`u CDP documents are available at hawaiicountycdp.info/kau-cdp.

ALSO SEE KAUCALENDAR.COM AND FACEBOOK.COM/KAUCALENDAR.
Posted by The Ka`u Calendar at 1:15 PM Links to this post