KA`U HOSPITAL WILL BE TOBACCO-FREE beginning May 1, reports administrator Merilyn Harris. The East Hawai`i Region of Hawai`i Health Systems Corporation has adopted a tobacco-free policy for all its facilities. The use of tobacco products will be prohibited on these campuses, including the parking lots. Howard Ainsley, CEO of East Hawai`i Region of HHSC, said, “We’re asking our community and hospital staff to help foster a healthy environment for patients and visitors. This new tobacco-free policy makes good public health sense for our hospitals.”
The East Hawai`i Region will provide support to patients, staff and the community in their efforts to quit using tobacco products. Patients are currently offered tobacco cessation information and tobacco abatement products such as nicotine patches. Tobacco cessation classes are being organized for staff and community members.
According to the Coalition for a Tobacco-Free Hawai`i:

For more information, contact Elena Cabatu at 932-3160 or ecabatu@hhsc.org.

THE PUMP AND MOTOR AT OCEAN VIEW WELL need to be replaced, reports Kanani Aton, of the county Department of Water Supply. When the repairs can be completed depends on availability of materials needed. Hawai`i-based contractor Beylik Drilling and Pump Service is handling the repairs.
Until the fill station can be re-opened, residents can use alternate spigot sites ate Wai`ohinu and Ho`okena. 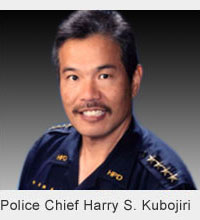 FIVE MORE POLICE OFFICERS FOR KA`U have been requested by Police Chief Harry Kubojiri. He asked the County Council for this and other staffing increases at budget discussions yesterday.
“We have the same number of officers we have had for awhile,” he said, according to Tom Callis of Hawai`i Tribune-Herald. “It’s just that the number of calls are increasing.”
Kubojiri’s supplemental request totals $2.24 million.

“THERE WOULD BE A COST to the community in Ka`u,” wrote Pahala resident Lynn Hamilton in response to state Consumer Advocate Jeffrey Ono’s claim that “ratepayers do not pay for anything until `Aina Koa Pono actually delivers biodiesel to Hawai`i Electric Light Co.” In testimony to the Public Utilities Commission regarding the proposed contract between AKP and HELCO for 16 million gallons of biofuel refined in Ka`u from plants grown between Na`alehu and Pahala, Ono said that he “discounts statements” from Hawai`i Island residents that “ratepayers are being asked to fund this unproven technology and the risk of failure falls on consumers” because they are “factually incorrect.”

Hamilton replied to Ono: “Maybe people in Honolulu wouldn’t be affected; maybe it wouldn’t cost them, but there will be a cost to include, but not limited to, the cost of 200 (the number has fluctuated) workers coming into the town of 1,479 residents, housing established for workers, displaced workers, clearing the land preparing for planting, the planting of plants – undetermined plants – plants referred to as ‘sterile grasses’, the cutting of non-native trees, the trucking in all the supplies — fertilizers, poisons, needed minerals for the microwave catalytic depolymerization process, the structure itself, the placement of storage units, water sources as well as other negative externalities.
“This Island/community would be entering into an undertaking with a company which states they might do an EA or EIS if there are concerns after the plant is in operation. As AKP stated in its eNews Jan. 2013: ‘Once the unit is operational, we will better determine if an Environmental Assessment or Environmental Impact Statement is required.’
“If the refinery isn’t productive and AKP cannot deliver the product, will the structures, storage tanks, chemicals, etc. be removed? If `Aina Koa Pono builds a refinery 1.5 miles from the center of Pahala and it does not produce useful fuel for HELCO, there will still be a cost (to) this community.
“I sincerely hope you will continue to study this proposed project and hopefully recognize the cost.”
Hamilton’s comments, along with other documents regarding the proposed AKP/HELCO contract, are available at puc.hawaii.gov.

ARMY OFFICIALS AT POHAKULOA TRAINING AREA are opening several conservation areas for bow hunting tomorrow and Sunday to support ongoing protection efforts for threatened and endangered species. Training Areas 17, 19 and 20 will be open for bow hunting of mammals, only, from 5 a.m. to 7 p.m. These fenced areas are home to various protected plants and animals, and animal control is important to ensuring their survival, said a statement from PTA.
For more information, call PTA Hunter’s Hotline at 969-3474, visit www.garrison.hawaii.army.mil/pta and click on the “Hunting” tab, or refer to instructions on the hunting pass.

TWO WEEKS FROM TODAY is the Miss Ka`u Coffee Pageant. Four contestants – Kawailani Houvener, Seneca Lee Oleyte, Rachel Ornelas and Tiare-Lee Shibuya – compete in talent, gown and interview categories beginning at 6 p.m. on Friday, April 26 at Ka`u Coffee Mill, where a stage and runway will be built along with seating for approximately 300 people. Tickets are $10 each and available through the contestants.
To volunteer to help at the event, call pageant chair Gloria Camba at 928-8155. To donate to the scholarship fund and to support the event program, call scholarship chair Julia Neal at 928-9811. Pageant director is Nalani Parlin.
Ka`u Coffee Mill will be open before the pageant.

ALSO SEE KAUCALENDAR.COM AND FACEBOOK.COM/KAUCALENDAR.
Posted by The Ka`u Calendar at 1:34 PM