PLANNING FOR A CHARTER SCHOOL IN KA`U continues, following a meeting and spaghetti dinner at Pahala Hongwanji yesterday where organizers gave prospective parents of students an update. One of the backers of the effort, Ross Rammelmeyer, of Volcano, said former Na`alehu School teacher Kathryn Tydlacka is planning a hybrid of student/teacher face-to-face contact sessions and online educational programs. Various locations are being researched. He also said the program would include “guest lectures from persons well educated and experienced in various disciplines.”
For more information, contact Tydlacka at 918-640-1267
To comment on this story, go to https://www.facebook.com/kaucalendar.


HAWAI`I COUNTY CIVIL DEFENSE AGENCY reports that effective this morning, the National Weather Service has issued a tropical storm warning for the island of Hawai`i. High wind, surf, surge run-up, heavy rains and flooding expected within the next 36 hours.
Residents in coastal areas are advised to take precautions. Boat owners are advised to secure their vessels and complete these activities before tonight. Residents in flood-prone areas are advised to expect flooding conditions and to take appropriate measures. Everyone is advised to anticipate possible power outages and interruptions in telephone communications.
Residents can monitor local news and weather forecasts for updated information. 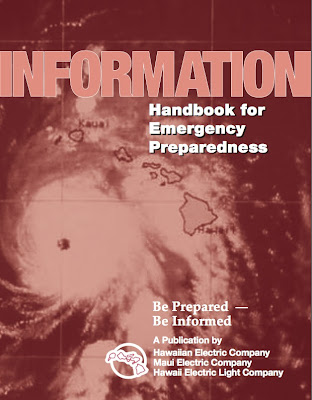 HAWAIIAN ELECTRIC LIGHT COMPANY’S free Information Handbook for Emergency Preparedness has information to help get ready for Flossie. It includes key numbers to have on hand, checklists for emergency supplies such as a home survival kit and first aid kit, electrical safety information, power outage preparedness and recovery, household and food safety tips and references and links to related resources such as the American Red Cross, Federal Emergency Management Agency and civil defense agencies.
The handbook can be downloaded at helcohi.com.

DUE TO EXPECTED HIGH WINDS AND HEAVY RAINS associated with Flossie, the Department of Land and Natural Resources’ Division of Forestry and Wildlife on the Big Island has closed Ka`u’s Ainapo Trail and cabin as well as the Waimanu trail and campground and Pololu trail. The closures will stay in effect until staff can inspect the condition and safety of the trails once the storm system has passed.
For further information, contact the DOFAW Hilo Office at 974-4221.
DLNR also advises the public to avoid entering forest areas on all islands starting Monday as Flossie arrives in the Hawaiian islands. Storm conditions can trap recreationalists by blocking trails and roads from flash floods and falling trees. Falling rocks, falling trees and landslides pose additional threats to people in the forest reserves.
“We advise that hikers, campers or hunters should avoid trails, streams and backcountry areas under these conditions,” said William J. Aila, Jr., DLNR chairperson.

ALL OF THE SCIENTIFIC AUTHORITIES of the Mauna Kea Thirty Meter Telescope partners have signed a Master Agreement establishing a formal agreement among the international parties defining the project goals, establishing a governance structure and defining member party rights, obligations and benefits.
TMT is a collaboration among universities in the United States with institutions in Canada, China, India and Japan, and with major funding from the Gordon and Betty Moore Foundation.
“The signing of this Master Agreement marks a major milestone in the official commitment to and formalization of this global collaboration, ensuring that the TMT project is on schedule and progressing smoothly,” said Henry Yang, chair of the TMT Collaborative Board. “We have been working toward this moment for a long time, and this is a special day for astronomy’s next-generation observatory.”
The Master Agreement brings together the TMT partners for the purpose of developing, designing, financing, constructing, commissioning, operating and decommissioning a next-generation, thirty-meter-class astronomical observatory.
“We are pleased with this vote of confidence from the scientific authorities,” said Edward Stone, vice chair of the TMT Board. “Their signing of this Master Agreement is a key endorsement of TMT’s scientific merits as well as the project’s overall implementation plan.”
The next step will be for financial authorities of the partners to similarly sign the document and finalize the funding plan.
“With the scientific authorities now all on board, we welcome and look forward to the critical support of the remaining financial authorities in advancing the TMT project," said Yang.
Construction of TMT is planned to begin in April 2014, and TMT is scheduled to begin scientific operations in 2022.

LARGE, PREDATORY FISH FROM OFFSHORE WATERS around Hawai`i have been ingesting a surprisingly large amount of plastic and other marine debris, according to new research by scientists at University of Hawai`i-Manoa.
These observations are the first of their kind in scope and in number. Over a six-year period, researchers investigated the stomach contents of 595 fish representing 10 predatory open-ocean species, including commercially valuable tunas and billfishes. Seven of the 10 species ingested some form of debris, with varying degrees of frequency.
“One of the species we looked at is opah, or the moonfish (Lampris guttatus), a popular fish consumed in Hawai`i and around the world,” said Anela Choy, a UH-Manoa graduate student and lead author of the study that was recently published in the scientific journal Marine Ecology Progress Series. “In the two species found in Hawaiian waters, 58 percent of the small-eye opah and 43 percent of the big-eye opah had ingested some kind of debris. This was based on looking into the stomachs of almost 140 opah.
“Another large fish species, the longnosed lancetfish (Alepisaurus ferox), had a 30 percent debris ingestion incidence,” Choy said. “Although this is not a species consumed by humans, it is a very common fish in open ocean waters globally and is very frequently caught by fisherman around Hawai`i.”
The study was based on observations collected during multiyear diet studies. The primary objective of the study was to describe food habits and trophic ecology of large fish species in the region, according to Choy and her co-author Jeff Drazen, an associate professor in the Oceanography Department of UH-Manoa’s School of Ocean and Earth Sciences and Technology.
“What was most surprising was that the fish that most frequently ingested debris are all thought to be deeper-water species, generally those that live beneath the sunlit upper 500 to 600 feet of the water column,” Choy said. “Deeper water fishes may have been coming up close to the surface to ingest debris, which is an unusual and unexpected behavior.”
Or, the debris could be coming to them, the study suggests. Buoyant plastics are known to sink into the deep ocean when waterlogged or perhaps weighted down by algae or encrusted by small sea animals. Wind-driven ocean mixing or water currents could also possibly transport debris to deeper waters.
The effects of plastic ingestion on the health of these predatory fishes remain uncertain. Researchers don’t know how long debris stays in the stomachs of large fish or whether they are able to pass such debris.
Many plastics are known to absorb or take up PCBs, organochlorine pesticides, metals, and petroleum hydrocarbons from sea water. However, it is not known whether the toxins are transmitted to the fish that consume the plastic, or ultimately to humans who consume the fish.

TUESDAY’S AFTER DARK IN THE PARK FEATURES Laupahoehoe Train Museum. Museum treasurer Doug Connors discusses the history of railroads on the island of Hawai`i, the sugar plantations and the development of Hamakua Coast. Topics include effects of the 1946 tsunami and the development of the train museum, which started in 1995.
The program begins at 7 p.m. at Kilauea Visitor Center Auditorium in Hawai`i Volcanoes National Park. $2 donations support park programs, and park entrance fees apply. 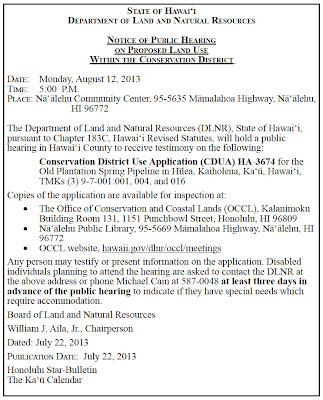