RESTRICTIONS ON PRIVATE SOLAR ELECTRICITY systems imposed by Hawai`i’s electric companies are getting worldwide attention.
In Al Jazeera, Bloomberg and Scientific American, stories discuss Hawaiian Electric Co.’s decision to stop connecting solar systems installed by homeowners and businesses to the utility’s power grid. “When you have all this power flowing around with nowhere to go, so to speak, it can cause reliability problems,” said Peter Rosegg, a spokesman for Hawaiian Electric Co., to Al Jazeera.
William Walker, an O`ahu homeowner who installed a rooftop solar system, told Bloomberg, “Everyone is on board with getting solar, and HECO has now put up a wall. The only thing we can see is profit motivation.”
According to the Bloomberg story, nine percent of the utility’s residential customers on O`ahu are already generating most of their power from the sun, and connections to the grid have doubled yearly since 2008.
Cully Judd, founder of Inter-Island Solar Supply said, “They (the utilities) are technologically stagnant on being able to handle all of this.”
While some say the utilities are concerned about their bottom line, Rosegg told Al Jazeera that the utilities’ concerns are about safety and responsibility. “Like every utility across the country, we basically were developed to send electricity one way, from our power plants to our customers. And now we have a situation where 10 percent of our customers are randomly taking or sending power over a system that really wasn’t designed for that,” he said.
State Representative Cynthia Thielen told Bloomberg, “This is a company with a drenched-in-oil mentality. They’ve fought from day one on renewables. I look at the company as ultimately becoming obsolete unless it changes its practices.”
The Bloomberg story talks about the possibility of those who have installed solar sytems that are in limbo going off the grid and tying into battery storage systems. With the possibility that the moratorium in some sections of Hawai`i could go on for two more years, homeowners could make batteries work financially and “cut the cord from the utility altogether,” said Phil Undercuffler, the director of a battery technology company.
Jeff Davis, a partner in an O`ahu solar company who is known as the Solar Guy on a local talk radio program, told Bloomberg, “All these installers are going to go to batteries. The utility has opened up the genie bottle.”
In Scientific American, Robert Harris, executive director of Sierra Club Hawai`i, said, “Hawai`i is a crystal ball into what every other state is going to have to look at as they start reaching higher and higher levels of solar activity. There is a national debate about what is the future model of the utility. That is happening in real time in Hawai`i.”
See america.aljazeera.com, bloomberg.com and scientificamerican.com.

SMOKING, MERCURY EXPOSURE AND PRESCRIPTION DRUGS are topics of studies reported recently in the Hawai`i Journal of Medicine & Public Health.
Ethnicity, sex, immigration, and acculturation are all significant predictors of smoking among youth in Hawai`i. Girls whose mothers were born in Hawai`i or in another United States state were more likely to smoke than those whose mothers were born in a foreign country. The story found that girls were more likely to smoke than boys. Eleventh- and twelfth-graders were more likely to smoke than ninth-graders. Whites, Filipinos, Native Hawaiians, Pacific Islanders and other ethnic groups were more likely to smoke than those who identified themselves as Japanese.
Men and women are subject to excessive methylmercury exposure in Hawai`i. The highest amounts of mercury found in human hair samples were in men over 45, those living in Hawai`i for more than a decade and those consuming fish more than once a week. “Following safe fish consumption practices allows residents to reap health benefits of fish consumption without excessive toxicant exposure,” the study concludes. Too much mercury subjects men to cardiotoxicity and pregnant women to health risks for their babies. The mercury measurements were on O`ahu.
Prescription drugs are responsible for much drug abuse. University of Hawai`i - Hilo School of Pharmacy is taking on the challenge. According to another report in the journal, “unwanted medications in households and patient care facilities expose vulnerable populations, including children, elders and pets to potential harm through inadvertent ingestion, as well as the potential for theft and assault. Hawai`i Administrative Rules prohibit the return of any prescription medications to retail pharmacies after dispensing.
The Hawai`i Narcotics Enforcement Division partnered with the University of Hawai`i at Hilo Daniel K. Inouye College of Pharmacy in 11 Drug Take-Back events throughout the state. Most participants heard of the events via newspaper and television marketing. The most common methods of medication disposal are via trash or down household drains. Over 8,000 pounds of unused/unwanted medications were collected, identified and logged from 2011 through 2012.
The majority of returned drugs, 90 percent, were non-controlled substances. Commonly returned medications included prescription cardiac medications such as simvastatin and lisinopril, non-prescription analgesics such as aspirin and ibuprofen, and dietary supplements such as vitamins and iron. Commonly returned controlled substance medications included narcotics such as hydrocodone/acetaminophen combinations and oxycodone, and sedative hypnotics such as zolpidem and lorazepam, the abstract from the study says.
It also notes that “pharmacological treatment of human health conditions constitutes a major component of contemporary health care in the United States. In 2011, sales of prescription drugs in the U.S. reached $320 billion, over-the-counter medications $17.4 billion, and dietary supplements approximately $30 billion. In 2011, more than 3.76 billion medication prescriptions were filled in retail pharmacies in the U.S.; of these, more than 16.6 million prescriptions were filled in retail pharmacies in Hawai`i. An estimated 1.74 billion over-the-counter products were sold in the U.S., with 6.98 million in Hawai`i. Sales of dietary supplements in Hawai`i were estimated at $120 million for 2011.
See more at www.hjmph.org.
To comment on or like this story, go to facebook.com/kaucalendar.

PARTICIPANTS CAN BRING LUNCH and learn about the vital role of `ohi`a lehua in native Hawaiian forests, the many forms of the `ohi`a lehua tree and its flower tomorrow at the Kahuku Unit of Hawai`i Volcanoes National Park. The free program begins at 11:30 a.m. Call 985-6011 for more information. 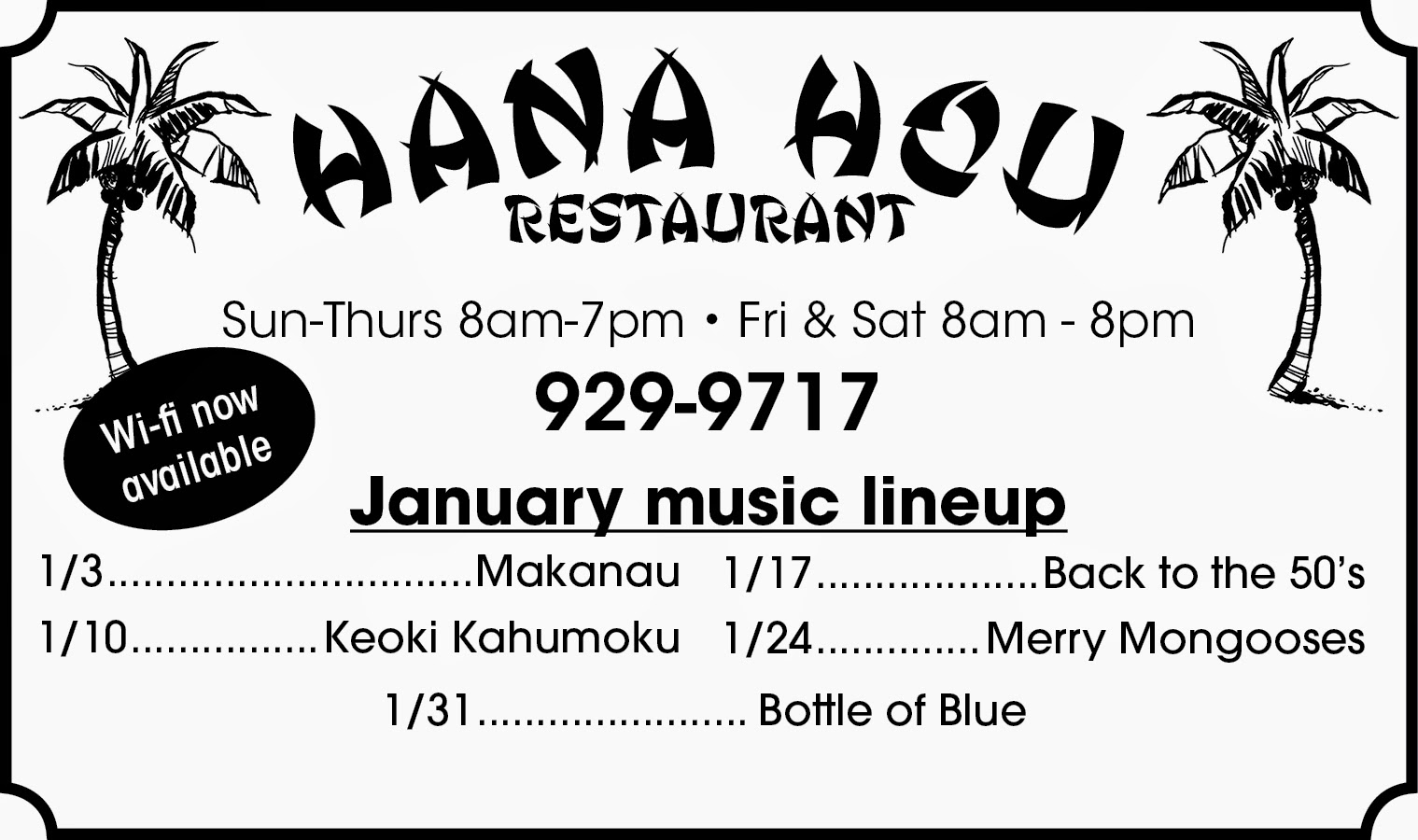 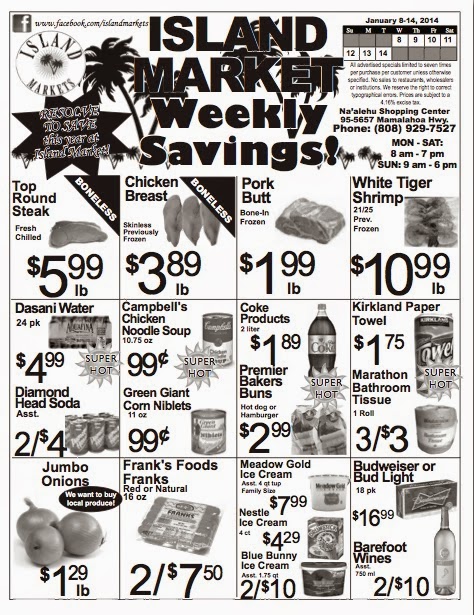 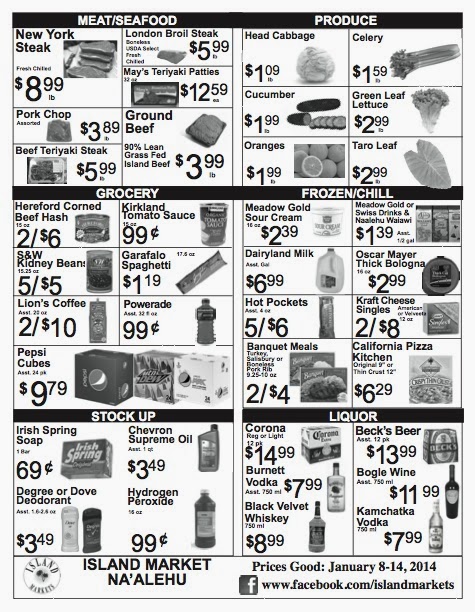 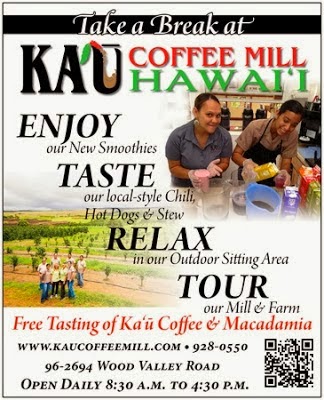 Posted by The Ka`u Calendar at 11:41 AM Links to this post