SHUTDOWN AT HAWAI`I VOLCANOES NATIONAL PARK yesterday fell hard on one of Ka`u’s biggest employers and attractions as visitors drove away from the closed gate. Park Superintendent Cindy Orlando was on furlough this morning along with all but 13 staffers providing the most basic services, including guarding the main entry. Only workers at Volcano House, until tomorrow when it shuts down, those approved to provide essential services, and those with mail at the park post office are allowed passage. Hawaiian Volcano Observatory, a facility of the U.S. Geological Survey, is also operating with a skeleton crew, just large enough to deliver basic monitoring of earthquakes and lava movement, with no visitors allowed at the Jaggar Musuem on the rim of Halema`uma`u.
Kilauea Military Camp, which offers accommodations and recreational facilities to the military and Friends of KMC, is turning away guests and most of its employees are on furlough. Volcano Art Center Gallery is closed, as is the Kilauea Visitor Center with its programs, theatre, interpretive center and store. Volcano House is unable to serve meals to anyone but its guests, who must leave Thursday morning.
Other federal programs threatened by the shutdown that are visible in Ka`u include Women Infants & Children, the WIC nutrition funding that provides healthy food for pregnant women and children. It is expected to run out of money.
The shutdown  stems from congress failing to provide funding for the federal government, as members of the U.S. House of Representatives and Senate fight over the new federal health care program and other issues. The shutdown put some 800,000 federal workers on furlough yesterday morning. President Barack Obama was scheduled to meet this afternoon with Democrat and Republican leaders to discuss the stalemate.
The cost to the Ka`u economy and to other small communities across the country could rise into many millions of dollars should the shutdown be prolonged.


MAYOR BILLY KENOI AND KA`U COFFEE FARMERS met last night with representatives of Lehman Brothers Holdings, the new owner of the land holding all of the coffee farms at Moa`ula and Pear Tree, where most of the famous Ka`u Coffee is grown. Joel LaPinta, representing Kennedy Wilson, the broker assigned by Lehman to sell the property, said that Lehman is obliged to sell the land to pay down debt from its own bankruptcy. "Lehman Brothers Holdings is a liquidating trust, not there to own or develop the property," LaPinta said. The land was acquired by Lehman in a foreclosure auction earlier this year where Lehman was the lender to the Windwalker group, which owed Lehman some $45 million.
The coffee growers occupy less than 400 acres of the property, but their lands have been promoted to investors as some of the best coffee farms in the world. After the Windwalker group convinced the former county planning director to allow a subdivision to make their farms into a Project Unit Development for coffee estates with houses, farmers said they feared they would be unable to buy them or obtain long term leases. Over time, they said, they could be evicted should the property be sold to investors and second-home buyers.
Farmers said they are operating with no land security and no leases. Ka`u Coffee Growers Cooperative President Gloria Camba asked LaPinta what will happen with farmer leases. LaPinta said that he expects Lehman to allow coffee growers to stay on the land at the same rental rate they have been paying for their farms. He said the farmers will soon receive a letter telling them where to send their rent checks.
LaPinta explained that the Lehman plan is to sell - in one transaction - the 5,800 acres which includes the coffee lands, coastal lands bordering Waikapuna south of Honu`apo, pasture lands above Honu`apo, two houses in Na`alehu and several other lots. He said that he doesn't expect any large institutional investors or the kind of Lehman lending involved in the foreclosure to be involved in the Ka`u properties sale. He said there are buyers whom he expects to make offers on the property by March.
The mayor said he has written a letter, urging Lehman to inform anyone considering buying the property that the county supports the coffee farmers.
Kenoi promised to help the farmers in any way he can. He noted, however, that "this is not Russia," pointing to the free market system of the United States that allows property rights and sales of land from one entity to another. He said, however, that whoever buys the land and plans any development may have to come to the county for permits, zonings, subdivisions and other permissions and that he wants any buyer to know that the county cares about the coffee farmers.
Kenoi praised the farmers, many of them displaced sugar workers who made a new industry for Ka`u, but now lack land security. He said that while going door to door to meet Pahala residents, he could see coffee farmers' efforts. "All your coffee beans in your yard. You work hard!"
"You folks made your value. You are for real. You made your brand!" the mayor told the farmers.
Coffee farmer Trini Marques recalled the start-up of the Ka`u Coffee farms when six displaced sugar workers broke ground. She said they were laughed at. "We put the value in the land. That's hard, that. Look, now everybody is good, finally making money."
Coffee broker Malian Lahey said the community is "intentionally creating a public dialogue," to support the farmers.
Kenoi said he wished he had millions of dollars to buy the lands where the farmers are growing their famous Ka`u Coffee and talked about the idea that interested parties could "hui up." The Nature Conservancy has expressed interest in coastal lands at Waikapuna, ranchers have shown interest in the pastures and the farmers want long term leases on the coffee lands.
LaPinta said that Lehman has the land for sale without a price,  but could be announcing a price within a week or two. Values discussed among those at the meeting included estimates of $15 million to $18 million for all 5,800 acres.
Also introduced at the meeting was Hayden Akamu, the new onsite manager of all the Lehman lands in Ka`u. Akamu is a retired police officer who lives in Pahala and will be the local liaison between Lehman, LaPinta and the coffee farmers and others using both the mauka and coastal lands for pasture and recreation.
The coffee farmers were also encouraged by Pepe Miranda, who assists them in the fight against the coffee berry borer that damaged Kona Coffee farms. He urged the Ka`u farmers to protect their crops from the pest and the mayor promised some emergency funding to help them to purchase  the fungus that kills the borer. Lahey and farmers discussed that in the long term they could attempt to grow their own fungus to offset the cost of the commercial product used to kill the borers.
Miranda told the farmers, "Don't give up," and praised them for creating the best Hawaiian coffee. He said that he made many friends in the Ka`u coffee growing community and hopes to work with the farmers again. He said that Ka`u Coffee farmers would give the shirts off their backs to help one another.
Kenoi concluded by setting another meeting with the Ka`u Coffee Growers Cooperative and other Ka`u coffee farmers for Tuesday, Oct. 15 at 6 p.m. at Pahala Community Center. He said that what's important is "not the brand. It's the people and their work. Tough times don't last but tough people do," Kenoi told the Ka`u Coffee farmers.

ART FOR THE COVER CONTEST FOR THE DIRECTORY 2014, the annual publication of the Ka`u Chamber of Commerce, is being accepted until Thursday at 4 p.m. at CU Hawai`i Federal Credit Union in Na`alehu. The annual art show is on display and voting is ongoing by the public. At the end of the week, the popular vote will determine the winner of the cover contest. The art show is on display during credit union hours and includes a keiki division. Art on display includes paintings, decorated ipu, Hawaiian weapons, photographs and many other visual arts. The theme is Ka`u.  For more, call Ka`u Chamber of Commerce president Dallas Decker at 516-662-8789. Memberships and advertising are also being taken by the Chamber for The Directory 2014, which raises money for scholarships for Ka`u college students. Call 928-6471.
SUPPORT OUR SPONSORS ATPAHALAPLANTATIONCOTTAGES.COM ANDKAUCOFFEEMILL.COM. KA`U COFFEE MILL IS OPEN SEVEN DAYS A WEEK. 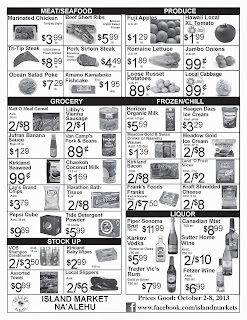 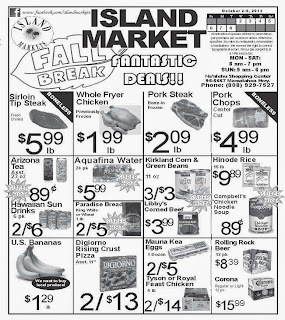 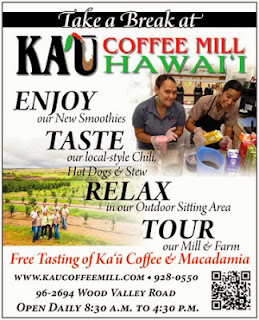 Posted by The Ka`u Calendar at 10:30 AM Links to this post