ED CASE AND MAZIE HIRONO are showing their differences as they make more public appearances around the state, seeking the Democratic nomination for U.S. Senator. Last night on PBS, they displayed diverging views on handling the recovering economy. Hirono said that government should continue investing in jobs.
Case said the U.S. economy could face a “train wreck” similar to what’s happening in some European countries if the government keeps spending at the same rate. “Eventually, the private sector has to create and provide those jobs. We cannot go on spending the amount of money that we are spending in this country and expect that we’re going to be able to handle our basic obligations from our federal government, much less the things that we want to do over and above that.”
Hirono said, “We’re in a unique time in the history of our country — the worst economic crisis since the Great Depression. You do not recover from that kind of cataclysmic economic downturn overnight.” She said the “private sector - the corporations - are holding on to billions of dollars that they’re not investing. So I think we’ve already tried this trickle-down approach.”
See more at www.edcase.com and www.mazieforhawaii.com. See more on Linda Lingle, the Republican contender, at www.lingle2012.com.

THE NAVY TOOK COMMENTS last night on a Draft Environmental Impact Statement for its operations plan for war games and weapons testing in waters extending from the Big island through Hawai`i and out to California. According to a report by Peter Sur in this morning’s Hawai`i Tribune-Herald, the comment gathering session was punctuated by the appearance of peace activist Jim Albertini, who stood silently in the center of the room “dressed as the Grim Reaper, with a skull mask, an American flag hanging from a mockup of a scythe and signs reading ‘Go Navy,’ hanging from his front and back.”
The story says that some participants who attended the session talked about concern for sonar affecting marine mammals and possible collision with Navy vessels.
The Tribune-Herald notes that the Draft EIS says “although potential impacts to certain marine mammal species from the proposed action may include injury or mortality, impacts are not expected to decrease the overall fitness of any given population.”
The Tribune-Herald reports that Navy public affairs officer Mark Matsunaga explained that following the public comment period, National Marine Fisheries Service, should it approve the Navy’s operations plan, would issue a letter of authorization good for five years.
Read the entire Draft EIS and all about other Navy activities in Hawai`i by visiting http://www.govsupport.us/navynepahawaii.
Comments can be submitted through July 10 online and by mail to Naval Facilities Engineering Command, Southwest, Attn: HSTT EIS/OEIS Project Manager-EV21.CS; 1220 Pacific Highway, Building 1, Floor 3, San Diego, CA 92132-5190. See more at www.hawaiitribune-herald.com.


JULIE MITCHELL is the new executive director of Ku`ikahi Mediation Center. The organization has a long history of providing free and low-cost mediation services on the island. It is a 501(c)(3) nonprofit incorporated in 2006, after being a program of Hawai`i Island YMCA since 1983. Mitchell, who most recently served as general manager for Friends of Hawai`i Volcanoes National Park, brings a decade of nonprofit experience to the position. Mediation Center board president Andrew Wilson said Mitchell brings “innovative ideas to improve services, increase capacity, and expand our community outreach.” She replaced Cheryl Parkinson, who resigned to move back to the mainland.
Wilson said, “Our mission is to provide a safe environment, an impartial process and skilled, trained personnel for the delivery of affordable dispute prevention and resolution services to the East Hawai`i community.”
The Mediation Center is funded in part by the Hawai`i State Judiciary, County of Hawai`i, Hawai`i Island United Way, other community funding sources and individual donations. To learn more about the mediation services, call 935-7844 or visit www.kmchilo.com. 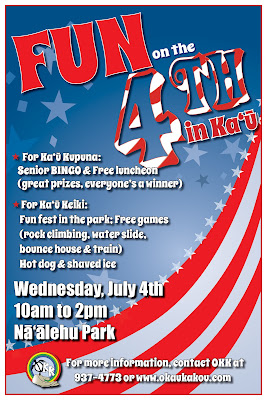 HAWAI`I VOLCANOES NATIONAL PARK’S SCHOOL INTERNSHIP program is half way through the summer and a big success, according to coordinator and ranger Kupono McDaniel. The program began three years ago with Ka`u High and is serving 52 students from Ka`u and beyond this summer from late May into August. The training started three years ago after visiting professor Joan Rubin and The Ka`u Calendar publisher Julia Neal worked on a grant with Ka`u High School principal Sharon Beck and Hawai`i Volcanoes National Park staff. Edmund Olson provided classroom space and has been providing a van for transportation all three years. The initial $60,000 grant has grown this year to $320,000.

FUN ON THE FOURTH IN KA`U, hosted by `O Ka`u Kakou, will be held from 10 a.m. to 2 p.m. at Na`alehu Park. The event is geared toward keiki and kupuna. Free games include a water slide, bounce house, train and rock climbing. Hot dogs and shaved ice will also be available for keiki. Senior Bingo with prizes and a free luncheon will be offered to kupuna. For more information, contact OKK at 937-4773 or visit okaukakou.com.
The Independence Day parade will be held Saturday, June 30, beginning at 11 a.m. at Na`alehu Hongwanji and traveling to Na`alehu Elementary School.

OCEAN VIEW COMMUNITY ASSOCIATION’S monthly barbecue, usually held on the third Saturday, will be held next Saturday, June 23, to make way for a graduation party tomorrow.

GRAMMY AWARD-WINNING slack key guitarist Jeff Peterson performs tomorrow at 7 p.m. at Volcano Art Center’s Niaulani Campus in Volcano Village. Doors open at 6:30 p.m. Tickets are $27 and can be purchased from Dave Wallerstein at 967-8222 or www.volcanoartcenter.org.

VISIT OUR SPONSORS AT PAHALAPLANTATIONCOTTAGES.COM AND KAUCOFFEEMILL.COM.