TOP 2013 STORIES IN KA`U FOR EDITORS of The Ka`u Calendar were the rejection of an 11,000-acre biofuel farm and refinery and the auctioning off of 5,800 acres of Ka`u coastal, pasture and coffee lands. Here is the top-ten list.
1. Rejection of `Aina Koa Pono. The County of Hawai`i and community members studied and largely opposed the plan to clear land between Pahala and Na`alehu of trees, brush and grass. They would have established a biofuel crop farm to serve a $400 million refinery that would have been constructed on the edge of Wood Valley near Ka`u Coffee Mill, an ecotourism destination. The refinery would have been mauka of Pahala’s water well and near a major fault zone. The biofuel farm could have displaced ranchers and restricted expansion of coffee and other food crop production. Ed Olson said on the eve of 2014 that his trust is no longer interested in accommodating the AKP plan. Earlier in December, the state Public Utilities Commission rejected a contract between AKP and the electric utility that would have raised some electric rates and held back the possibility of cheaper alternatives, the PUC concluded.

2. The foreclosure and auction of 5,800 acres of coastal, pasture and coffee lands leaves land security a major issue for  Ka`u Coffee farmers who have become entrepreneurs in their own right since the Ka`u sugar company shut down in 1996. Most own their own homes and businesses and could little afford to have the land sold out from under them. Ranchers are interested in the pasture lands and conservationists in the coastal lands, but Lehman plans to sell all 5,800 acres as one unit, keeping out most prospective local buyers.
3. The blending of Ka`u Coffee with coffee from such places as Latin America, Africa and Vietnam became an issue among coffee farmers who have vowed to keep the market high-end and pure. Proponents of blending contend that the practice will help make Ka`u Coffee more affordable and build a mass market, further increasing demand. Opponents, included those who have built their own brand names and marketing businesses, contend that Ka`u Coffee should be treated like a fine wine and never blended. Overseeing the blending is famous chef Alan Wong, who supporters say will guarantee the quality. Either way, the market for Ka`u Coffee is rapidly growing.
4. Can a public building create economic development? Former county council member Guy Enriques thinks so. The new $17 million Ka`u Gym & Disaster Shelter, now under construction and set for completion by the end of 2014, could host sports clinics and tournaments. Enriques said he is willing to work on bringing more volleyball to Ka`u. He owns volleyball clinics on the mainland and is the coach for Kamehameha Schools on this island.
5. Health care expanded in Ka`u with the opening of the new Bay Clinic facility in Na`alehu and improvements to Ka`u Hospital. In addition, a Longs pharmacy opened – the first pharmacy outside the hospital in Ka`u.

6. Libraries have a new life in Ka`u after nearly shutting down during the economic crunch when state government and schools were cutting funding. The libraries in Pahala and Na`alehu track usage and encourage residents to check out books, audio books, CDs and DVDs and use computers with Internet access and many programs that teach a variety of topics, including the Hawaiian language.
7. The federal shutdown took millions of dollars out of the Ka`u economy mainly through the loss of jobs and income connected to Hawai`i Volcanoes National Park. The shutdown highlighted the importance of the 117,000-acre park to the local economy as vacation rentals, bed and breakfast facilities, restaurants and stores depend on park visitors for income.
8. Ka`u Community Development Plan researchers and writers dug into the details for envisioning the future of Ka`u. The writers created an encyclopedia about the district and the possible future, recognizing the cultural, environmental and unique characteristics of the economy and the Ka`u people, which can be read at kaucdp.info.
9. Eight-man football was launched for the first time on the island by Ka`u High School, which was in danger of losing its entire football program. The Trojans traveled to Moloka`i and other small schools around the island to play the faster and higher scoring game that boasts fewer injuries.
10. Ka`u’s only radio station went off the air, but KAHU’s license was purchased by Hawai`i Public Radio, the statewide affiliate of National Public Radio. Though there is no longer local programming, HPR promises to consider it in a few years, after it puts KAHU on a tower that will send radio waves over the entire south side of the island. Current reach at 91.7 FM extends from the Pahala pole on Maile Street  into the surrounding communities.
To comment on or like this story, go to facebook.com/kaucalendar.

POWER OUTAGES HIT THE NA`ALEHU AREA New Year’s Eve morning, forcing some businesses to close. An area of outage was reported from Na`alehu Ball Park to Discovery Harbour. Power was out in Na`alehu for about three hours, while Discovery Harbour’s outage lasted longer, but by dusk, streetlights were on.

FIREWORKS WERE A FAMILY AFFAIR across Ka`u last night, lighting up and sounding off the start of the New Year. The Jan. 1 aerial fireworks show in Pahala, which would have happened tonight, failed to draw enough support to make it feasible, according to organizer Rodney Freitas, who said he is signing up sponsors for 2015. A licensed pyrotechnician, Freitas can be reached at Big Island Klimate Kontrol at 987-8918 or info@bigislandklimatekontrol.com for donations for the 2015 celebration.

JANUARY’S STARS OVER KA`U are covered by Lew Cook, an astronomer who has a home in Pahala and writes a column in The Ka`u Calendar.
Cook discusses perihelions, the point in an orbit where an object gets closest to the sun, and how comet ISON disintegrated after its perihelion.
“Earth will pass our perihelion on Jan. 4. Unlike comet ISON, the earth will fare much better during our perihelion passage because our orbit is nearly circular, but is a tiny bit of an egg-shaped ellipse. Our closest distance to the sun is about 91.4 million miles, while the furthest distance, in summer, is 94.5 million.
“Venus will pass by the sun on Jan. 11. It misses the sun by five degrees (about the distance your fist covers when you hold your arm straight out in front of you), not at all like the transit in June 2012 when Venus appeared to cross in front of the sun.
“Jupiter starts the year in Gemini, accompanied by its 63 moons. Only four of these can be seen through a small telescope or a good pair of binoculars. Saturn is in Libra, rising around 2:30 a.m. and ends these January nights high up in the sky at dawn.”
To comment on or like this story, go to facebook.com/kaucalendar.

HAWAI`I VOLCANOES NATIONAL PARK encourages Ka`u residents and visitors to enjoy programs and hikes at the park’s Kahuku Unit through March.
During the `Ohi`a Lehua program, participants learn about the vital role of `ohi`a lehua in native Hawaiian forests, the many forms of the `ohi`a tree and the lehua flower. Visitors traveling through the park will be able to identify the many differences of the most prominent tree in the Kahuku Unit. Pack a lunch to enjoy during the program. The `Ohi`a Lehua program is offered Jan. 12, Feb. 9, and March 23; from 9:30 a.m. to 10:30 a.m.
Palm Trail is a moderately difficult 2.6-mile loop traversing scenic pasture along an ancient cinder cone, with some of the best panoramic views Kahuku has to offer. Highlights include relics of the ranching era, sections of remnant native forest and volcanic features from the 1868 eruptive fissures. A guided hike of Palm Trail is offered Jan. 19, Feb. 23, and March 16; from 9:30 a.m. to 12:30 p.m.
People and Land of Kahuku is a moderate two-mile, three-hour guided hike that loops through varied landscapes to explore the human history of Kahuku. Emerging native forests, pastures, lava fields, and other sites hold clues about ways people have lived and worked on the vast Kahuku lands – from the earliest Hawaiians, through generations of ranching families, to the current staff and volunteers of Hawai`i Volcanoes National Park. Hikers learn about the powerful natural forces at work here and how people have adapted to, shaped, and restored this land. The guided hike is offered Jan. 26, Feb. 16, and March 9 from 9:30 a.m. to 12:30 p.m.
For all activities, enter Kahuku on the mauka side of Hwy 11 near mile marker 70.5, and meet near the parking area. Sturdy footwear, water, raingear, sun protection, and a snack are recommended.
To comment on or like this story, go to facebook.com/kaucalendar.

SEE THE DIRECTORY 2013 from the Ka`u Chamber of Commerce at http://snack.to/fzpfg59c. 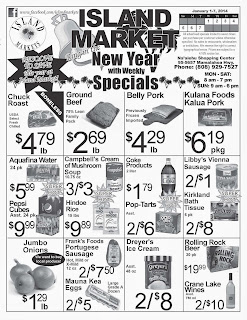 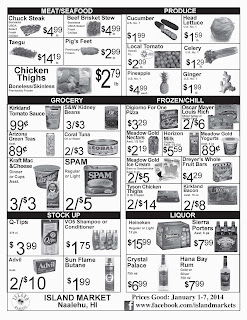 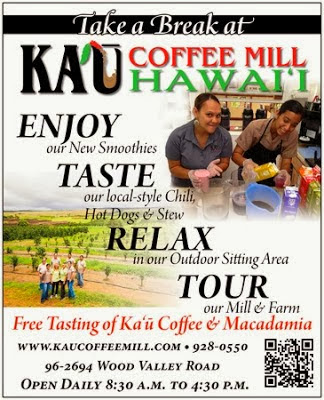 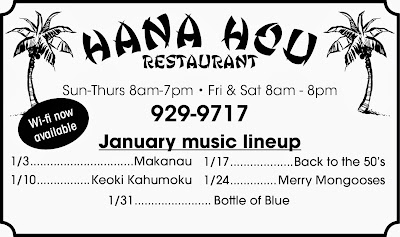 Posted by The Ka`u Calendar at 9:55 AM Links to this post