BAY CLINIC'S BREAST CANCER PREVENTION PROGRAM has been awarded $6,000 from the Safeway Foundation. The program is accessible to all regardless of income level or insurance status and provides clinical breast health care and referral services to help increase access to mammograms and other related clinical care.The American Cancer Society guideline states that women, with an average risk for breast cancer, ages 40 to 44, can choose to have a yearly mammogram, and recommends that all women age 45 through 54 have an annual mammograms. Beginning at age 55, women can change to having mammograms every other year or continue having them every year.
“Regular preventive screenings are an important part of staying healthy. Breast cancer screenings cannot prevent breast cancer, but it can help detect breast cancer early when it is easier to treat,” said Dr. Chrissy Capati, Bay Clinic’s Medical Director.
"Bay Clinic providers will work with you to determine which breast cancer screening tests are right for you, and when you should have them."
Call Bay Clinic’s Call Center at 333-3600 to make an appointment at any one of Bay Clinic’s primary care locations: Ka’ū Family Health and Dental Center, 95-5583 Māmalahoa Hwy. in Na’ālehu; Kea’au Family Health and Dental Center at 16-192 Pili Mua Street in Kea’au;
Pahoa Family Health Center at 15-2866 Pāhoa Village Road; Hilo Women’s Health Center (Ob-Gyn on-staff) at 73 Pu’uhonu Place, Suite 204; and Hilo Family Health Center at 1178 Kino’ole Street.

SAVE THE AFFORDABLE CARE ACT: USE HAWAI`I AS A MODEL, says west Ka`u's state Senator, Dr. Josh Green. "Like you, I have been closely watching the ongoing efforts by congressional Republicans to repeal and replace the Affordable Care Act. While it seems the most recent Senate healthcare bill is dead, the fight is far from over. The focus must shift to a bipartisan effort to fix the parts of Obamacare that aren't working while assuring that people do not lose their coverage."
Green shared an op-ed he wrote which was also carried in Civil Beat this week:
In 1974 the landmark Prepaid Healthcare Act was passed by the Hawai`i Legislature enabled us to insure most of our citizens by mandating that any working individual (more than 20 hours per week) received employer-sponsored health insurance. Since that time, Hawai`i has consistently ranked as the state with one of the lowest uninsured rates, usually hovering around 9 percent. We in turn have been continuously ranked No. 1 nationally for almost all health outcomes.
Our low uninsured rate has meant access to health care when people need it most. If citizens need to go to the emergency department, they are covered. Our people receive cancer screening at better rates than any other state in the land. We provide prenatal care to all of our young mothers who ask for it. When our seniors need help at a nursing home the service is available.
Our vaccination rates are among the highest in the country and though we have well documented challenges regarding health care provider shortages (especially in rural areas of Hawai`i) we still find a way to get people care more effectively than our peers across the country. We are doing a better job delivering health care in Hawai`i than the other 49 states.
We’re now witnessing from afar, the health care debate in Washington, D.C., which proposes to repeal and likely replace the Affordable Care Act, also known as Obamacare. This proposal from the Republican-led Congress, supported by President Trump, would radically roll back the health care safety net as Americans know it.
It proposes almost $1 trillion in cuts to the Medicaid health care safety net over the next decade. Hawai`i alone would lose over $200 million a year in healthcare support for our people, $2 billion over 10 years.
Specific cuts could be even more profound than the global reductions, such as shrinking or eliminating resources to treat those suffering from opioid addiction. Opioid use is at a national all-time high and has recently been described as the crisis of our time by many, with as many as 10 percent of the U.S. population experiencing some form of addiction.

In Hawai`i we are already only able to provide addiction treatment to less than 5 percent of our addicted love ones. The new bill may make it impossible to treat almost anyone with addiction, using Medicaid dollars.
One draft of the current legislation proposed to totally defund women’s health care services, provided at Planned Parenthood. This is often an attempt to insert the debate about a woman’s right to choose into a more global question of access to healthcare. It is despicable to divide us in this way.
When Obamacare was passed into law in 2010 it enabled states like ours to provide health insurance coverage for many more of our people. In Hawai`i we were able to expand our Medicaid program from 252,000 low-income citizens to approximately 362,000 covered individuals. This lowered our uninsured rate to below 4 percent.
From a practical standpoint this meant that more than 100,000 additional Hawai`i residents had the coverage they needed for their families, especially children and adults with chronic illness. It meant that people didn’t have to choose between paying rent and paying for health care visits. It meant people could stop worrying about going bankrupt if they had a healthcare crisis in their family.
It meant a young mother didn’t hesitate to bring her child to see me in the ER when her keiki had an asthma attack or an ear infection or perhaps something much more serious like leukemia. Obamacare meant we could breathe easier as a society when things got tough for our family’s health.
Having a higher percentage of our population insured also has meant greater stability for our rural hospitals. We have witnessed a great strain on the health care system with increasing chronic disease and an aging population, but this has been supported by having almost all of our citizens covered by health insurance.
If the current health care proposal passes it will not only force as many as 100,000 Hawaii residents to again become uninsured, but it will also put our health care safety net, especially the rural hospitals and health centers into grave jeopardy. Independent physicians will be less able to work in areas that aren’t densely populated or have too many uninsured people. It will be a disaster. This will occur all across America and it makes one wonder why this proposal is even being considered in the first place. Experts across the country in health care policy, including myself, agree that Obamacare needs to be updated, repaired and supported in a way that it can be more sustainable and continue to offer health care peace of mind for Americans.
Repealing it is not the answer — instead improving it makes the most sense.
In many regions across our country, including Hawai`i, where there are too few insurers to provide health care plans provided for by the Affordable Care Act, we should allow people to choose a public option. This would be a very straightforward way to stabilize Obamacare. It would also set the stage for grand discussion about the merits of Medicare for All, should our healthcare system further fragment in an unstable way going forward.
Congress should have the courage to challenge big Pharma and demand that all medications for people become much more affordable. Congress should put aside its petty partisan bickering and realize that good health care for all of its citizens is good politics.
Congress should acknowledge that pre-existing conditions must be covered. Congress should guarantee that anyone with addiction gets a second chance. Congress should never tell a woman what to do with her body.
Sen. John McCain has just had the luxury of critical life-sustaining surgery at the legendary Mayo Clinic, thus postponing a vote on the Senate floor of the bill that would prevent 22 million Americans from getting any health care, from rank and file docs across our country. This incredible hypocrisy should not be lost on anyone. McCain intends to vote yes on TrumpCare.
To read comments, add your own, and like this story, see Facebook. Follow us on Instagram and Twitter.

KING TIDES may cause flooding conditions along all shores of Hawai`i Island from Thursday through the weekend before gradually subsiding next week. The National Weather Service advises that in light of an unusually high tides forecast and possible storm swells from approaching Fernanda storm, the following precautions should be taken:
Ocean front residents, beachgoers, and boat owners are advised to be on the alert for high surf, strong currents and flooding.
As a precaution, consider postponing ocean activities until these hazards are over.
Special caution to the coastal areas in and around Kapoho during the high tide periods. 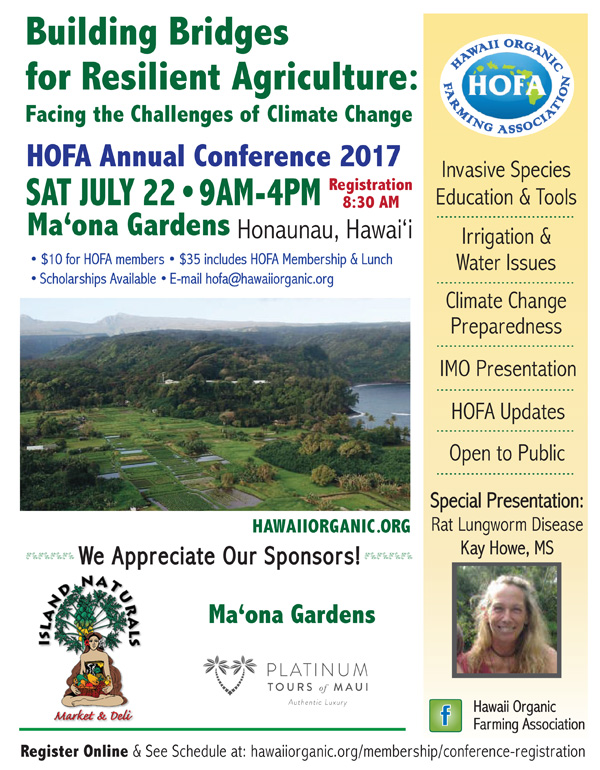 FERNANDA WAS BREAKING UP, changing from a hurricane to tropical storm Wednesday evening. The National Hurricane Center said that "her inner core has collapsed. ion fact, it appears that the mid- and low- levels are beginning to separate. Intensity estimates from all agencies relfect such decay..." Fernanda is expected to become a post tropical remnant low by the weekend an be far offshore Hawai`i.

To read comments, add your own, and like this story, see Facebook. Follow us on Instagram and Twitter.
HAWAI`I ORGANIC FARMING ASSOCIATION WILL HOST a conference this Saturday at Ma'ona Gardens in Honaunau from 9 a.m. to 4 p.m. Entitled Building Bridges for Resilient Agriculture: facing the Challenges of Climate Change, the day features sessions on water shortages and irrigation challenges, and an invasive species outlook in light of climate change. There will be an Indigenous Microorganism presentation. The session is open to the public with tickets at $35 to include membership and lunch.  Sponsors include Island Naturals. See www.hawaiiorganic.org

To read comments, add your own, and like this story, see Facebook. Follow us on Instagram and Twitter.
Finian's Rainbow continues its run at Kilauea Military Camp's Kilauea Theater this Friday and Saturday at 7:30 p.m. and Sunday at 2:30 p.m. Tickets are $20 general, $15 for seniors 60 plus and students and $12 for children 12 and under, available at the door. For more information or to make a reservation, contact KDEN at 982-7344 or kden73@aol.com.

Posted by The Ka`u Calendar at 11:03 PM Links to this post