KA`U HIGH SCHOOL’S ROBOTICS TEAM headed by Leilani Desmond competes today through Saturday at the Stan Sheriff Center at University of Hawai`i-Manoa. Ka`u and six other Big Island high schools are represented. The competition is called the Rebound Rumble and is staged on a carpeted mini court where robots attempt to put as many basketballs in a hoop as possible. The robots can be no larger then 28 by 30 inches and extend to a maximum of five feet tall. Some of the robots have a long arm that can dunk the ball and others can shoot the ball. The competition, called the Hawai`i Regional Robotics Competition, is sponsored by an organization called For Inspiration and Recognition of Science and Technology.
The FIRST organization, founded by inventor Dean Kamen in 1989, also created the First Lego League, Junior First Lego League and First Tech Challenge Competitions. It also hosts camps and other educational programs to promote teamwork, collaboration, respect toward one’s competitors and integrity in one’s actions. The students learn to work as engineers. Ka`u High science and chemistry teacher Theodore Brattstrom is faculty.
MORE RECYCLABLE ITEMS would be eligible for money under a pilot program that is being debated in the County Council. Schools, churches and nonprofits would be able to earn money by setting up a drop off place for a broader range of recyclables and taking them to a recycler to retrieve money. The measure would allow a pilot program operated simultaneously with the current recycling program at county transfer stations. The measure requests the county administration to provide money for recyclables not covered by the HI-5 program. Metal, cardboard, glass and plastic would draw five cents a pound. Council chair Dominic Yagong said he imagines recycling centers set up at schools, churches and other nonprofit locations. Ka`u Councilmember Brittany Smart said that with increased incentives, not recycling would be “like burning money.” South Kona Council member Brenda Ford said that people would have to understand that they would not individually receive money for turning in recyclables. It would be like donating money to the church, school or other nonprofit. The goal, said Yagong, it to divert more waste out of landfills.
THE COUNTY COULD HAVE AN ELECTED attorney, just like the prosecuting attorney, if another measure by Yagong is approved in a Charter Amendment. The Council’s Governmental Relations Committee is discussing whether to propose a found year term, like the prosecutor’s, or a six year term, as proposed by J Yoshimoto. The corporate council serves the County Council, departments and the mayor.
A BRUSH FIRE in the old mill yard near KAHU Radio Station in Pahala yesterday was extinguished after Mona Chow and Dean Nagasako, an announcer on the radio, reported it to the Fire Department. 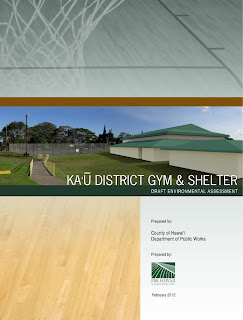 COMMENTS ON THE KA`U DISTRICT Gym & Shelter Draft Environmental Assessment are due tomorrow. The draft environment assessment is available at Pahala and Na`alehu Public Libraries and online at hawaii.gov/health/environmental/oeqc/index.html. Comments can be sent to Tammy Kapali, Planner, PBR Hawai`i & Associates, Inc., 1001 Bishop Street, Suite 650 Honolulu, HI 96813 or faxed to 808-523-1402. Comments can also be sent to County of Hawai`i Department of Public Works, Attn: David Yamamoto, Aupuni Center, 101 Pauahi Street, Suite 7, Hilo, HI 96720 or faxed to 808-961-8630.
KA`U HIGH’S VARSITY BASEBALL TEAM welcomed Kea`au yesterday afternoon at Pahala Ballpark. Kihei Serrao hit a three-run homerun, while teammate Mark Cuison brought in a triple. Although Ka`u led 4-2 at the end of the first inning, Kea`au eventually won the game, 9-4. Pitching for the Trojans was Anthony Emmsley-Ah Yee.
KA`U HIGH BOYS VARSITY VOLLEYBALL took down Konawaena last night on home turf. The Trojans were on fire, scoring 19 points in the first set within the first ten minutes of the game. They zipped through the first two sets, winning 25-10 and 25-12. Konawaena put up a fight in the last set, managing to tie the Trojans at 21 points. However, the Trojans inched ahead to win 25-23. Support the Trojans as they host St. Joseph on Friday and Laupahoehoe on Saturday. Both games start at 6 p.m.
COACHING positions are now open for Ka`u High fall sports. Applications for football head coach and cross-country head coach can be picked up at the school office. Deadline is March 30.
CAREN LOEBEL-FRIED demonstrates her linoleum block print process and signs prints and copies of Legend of the Gourd, her latest book about a story set in Ka`u, at Volcano Art Center Gallery in Hawai`i Volcanoes National Park on Saturday from 11 a.m. to 2 p.m. The event is free, and park entrance fees apply.

NA`ALEHU MAIN STREET presents The Hurricane on Saturday at 4 p.m. at Ocean View Community Center. The performance of this original three-act murder mystery benefits the Food Pantry. Attendees are asked to bring canned food equivalent to $10 or a check made out to Hawaiian Island Food Basket, with a notation in the TOP LEFT corner stating Ocean View Pantry 551, for the same amount. For more information, call 929-7236 or email marge@hawaii.rr.com.
ONE MORE DAY TO COUNT WHALES for the National Marine Sanctuary this year. It will take place on the Ka`u Coast and inside Hawai`i Volcanoes National Park on Saturday, March 31 from 8 a.m. to 12:15 p.m. Volunteers count and record whale behavior. Register at http://sanctuaryoceancount.org. See http://hawaiihumpackwhale.noaa.gov. T-shirts for the 2012 Sanctuary Ocean Count are also available.

SEE OUR SPONSORS AT WWW.PAHALAPLANTATIONCOTTAGS.COM AND WWW.KAUCOFFEEMILL.COM.
Posted by The Ka`u Calendar at 10:00 AM Links to this post