HAWAIIAN ELECTRIC COMPANY HAS ANNOUNCED that executive vice president Robbie Alm will be leaving the company, effective August 30. Alm has submitted testimony to the Public Utilities Commission in support of the proposed 20-year contract for which Hawai`i Electric Light Company would purchase biofuel that would be produced in a refinery near Wood Valley Road, using trees, shrubs and biofuel crops that would be cleared and grown by `Aina Koa Pono. “The AKP Biodiesel Supply Contract will create a direct economic benefit to the state and energy security, and is in line with the state’s energy policy,” was one of his statements.
Hawai`i County, in its latest round of questions regarding Alm’s testimony, asked him to clarify several of his comments. Responses are due Friday, Aug. 2.
Testimony from all parties and participants in the docket, number 2012-0185, is available at puc.hawaii.gov.
Alm joined Hawaiian Electric in 2001 as senior vice president of public affairs and was promoted to executive vice president in 2008. During his tenure, the company completed, among other projects, Keahole Power Plant in Kona. He was one of the chief architects of the company’s comprehensive energy agreement with the state as part of the Hawai`i Clean Energy Initiative.
“The time is right for this transition,” said Alm. “In 2008, we signed an energy agreement with the state of Hawai`i to move our state away from oil and toward a renewable energy future. Five years later, we’ve doubled the amount of renewable energy that is meeting our customers’ needs to 18 percent. And we’re well ahead of the state’s next milestone goal of 15 percent by 2015.
“Recently, we filed a new energy plan with the Public Utilities Commission. The PUC must still review those plans, and there is more work to come. But we’ve set a course to provide even more low-cost clean energy to our customers. I have full confidence in our next generation of leaders to take our plans to the next level. And I will always be willing to help in any way I can,” Alm said.

GOVERNOR’S CABINET IN YOUR COMMUNITY, scheduled for tomorrow, will be the first such event  on Hawai`i Island for Gov. Neil Abercrombie, who invites East Ka`u and the rest of the East Hawai`i community to meet members of his Cabinet and share information vital to the Big Island. The event will include breakout sessions focused on areas of greatest importance to the people of East Hawai`i, as identified by island legislators and community members, according to a statement from Abercrombie.
The session takes place tomorrow,  Friday, July 19 from  5:30 p.m. to 7:30 p.m. at  University of Hawai`i-Hilo, Classroom Building (UCB) 100. Joining the governor to meet with the public will be Department of Land and Natural Resources chairperson William J. Aila, Jr.; Department of Agriculture deputy director Scott Enright; Department of Health director Loretta Fudd; State Energy Office Renewable Energy specialist Andrea Gill; Department of Hawaiian Home Lands chairperson Jobie Masagatani; Department of Transportation director Glenn Okimoto and Department of Public Safety director Ted Sakai.

KAHU RADIO’S CLOSING made the headlines in Hawai`i Tribune-Herald and West Hawai`i Today with the station's history told exclusively through the eyes of it most recent manager, Christine Kaehuaea.
According to the story, Kaehuaea reported the station’s debt at $68,000 and said that she has been selling off  equipment to help pay that debt. It also says that “she already donated a number of office supplies to nonprofits and community groups.”

The newspapers quote her saying that when she arrived in late 2011, “there was no business plan set up. There was no test for sustainability.” The story also reports her saying that there was no nonprofit for the station when she arrived. (The overseeing nonprofit was Haola Inc., a native Hawaiian organization based in Hilo, which helped fund the station along with donations, grants and underwriting of more than $100,000 dollars from OHA, state Civil Defense and Ka`u community members and businesses.)
The story states that the station covered an area from Kalapana to Ocean View. Regarding Civil Defense messages, the story reports “Before KAHU was operating, 'you could hear the sirens, but didn’t know why' they were sounding, Kaehuaea said."
Regarding funding for the station, the story says that “Ka`u has a reputation of being an economically depressed district, but Kaehuaea said there are residents in the area with deep pockets.”
“There is a lot of influential people,” she told reporter Erin Miller, “adding that those people couldn’t see how they could get a good return on an investment in the small station,” the story says.
According to the story, “The community radio format played a role in the station’s fiscal downfall, she (Kaehuaea) added. The Federal Communications Commission offers discounts to community radio stations for certain applications, but also limits what community radio can do to raise funds. The station couldn’t sell products or advertising and was forced to rely on donations to cover operating costs,” the story reports Kaehuaea saying. See more at hawaiitribune-herald.com.
According to Hawai`i Public Radio CEO Mike Titterton, HPR is buying the KAHU license through Kaehuaea for $20,000. He said he learned that the license was available for sale after seeing that equipment was being sold off. Approval from the FCC should come soon.
HPR funds its programming through sponsorship messages and fundraising. It expects to broadcast to the south end of Hawai`i Island using some of the KAHU equipment within a month or two with programming through HPR2. See hpr2.org for streaming radio. Titterton said that HPR hopes to bring back some local origination programming in the long term and will cover south Hawai `i for Civil Defense messages as soon as the HPR2 programming is launched under the KAHU call letters.
Wendell Kaehuaea, former manager and founder of KAHU, said he hopes the money raised from selling the license and equipment will be used to pay down debt to the local businesses.

KA`U COFFEE FARMERS, BROKERS AND MILLERS are on Kaua`i Friday through Sunday for Hawai`i Coffee Association’s 18th annual Conference & Trade Show and its fifth annual Cupping Competition.
Ka`u Coffee representatives include Rusty’s Hawaiian’s Lorie Obra, Joan Obra and Ralph Gaston; Ka`u Coffee Mill and Olson Trust’s John Cross and Lou Daniele, and Chris Manfredi, of Ka`u Local Products, who brokers Ka`u coffee to Starbucks and has managed the coffee lands at Moa`ula and Pear Tree for the owners. Both Manfredi and Cross serve on the board of directors of Hawai`i Coffee Association, and Manfredi is the organization’s vice president.
The agenda for the event includes a coffee break Friday morning sponsored by Rusty’s Hawaiian and a silent auction where Ka`u coffee products will be included. Workshops and presentations include green coffee grading, label compliance, cupping, roasting, packaging and quality control. Keynote speakers are Kaua`i Mayor Bernard Carvalho and Honolulu newsman Howard Dicus.
A number of Ka`u coffees were sent to Kaua`i for the cupping competition. Creative and Commercial Division winners will be announced on Saturday evening. The conference is held at the Kaua`i Beach Resort. 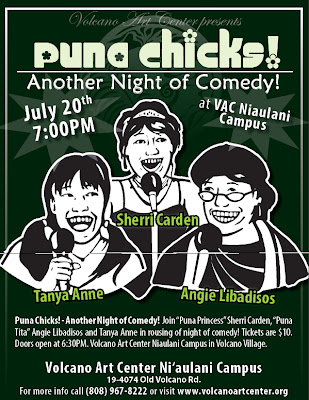 `OHI`A LEHUA IS A FREE PROGRAM Saturday from 11:30 a.m. to 1 p.m. at the Kahuku Unit of Hawai`i Volcanoes National Park. Participants bring lunch and learn about the vital role of `ohi`a lehua in native Hawaiian forests, the many forms of the `ohi`a lehua tree and its flower. For more information, call 985-6011.

AUDITIONS FOR LOL: LADIES OUT LOUD are set for Saturday at 3 p.m. at Volcano Art Center’s Ni`aulani Campus in Volcano Village. Women in comedy are invited to bring stories, jokes and skits under six minutes. Open to all women and even “wanna-be” women. Show is scheduled for Sept. 7. Call 967-8222 to sign up for an audition.

TICKETS ARE STILL AVAILABLE FOR PUNA CHICKS. “Puna Princess” Sherri Carden, “Puna Tita” Angie Libadisos and Tanya Anne, VAC’s chief entertainment officer present the night of comedy Saturday at 7 p.m. at Volcano Art Center’s Ni`aulani Campus in Volcano Village. Tickets are $10 or $9 for VAC members and can be purchased at 967-8222 or volcanoartcenter.org.

ALSO SEE KAUCALENDAR.COM AND FACEBOOK.COM/KAUCALENDAR.
Posted by The Ka`u Calendar at 11:46 AM