A FEMALE MONK SEAL visited Punalu`u Black Sand Beach yesterday. She arrived at 10 a.m. and returned to sea around 5 p.m. A student marine biologist from University of Hawai`i-Hilo stayed with her and helped locate where she was from. The tag on her flipper identified her as being from Moloka`i.

SEN. RUSSELL RUDERMAN meets with the public on Tuesday, Feb. 26 from 5 p.m. to 6:30 p.m. at Pahala Plantation House. The meeting takes place during the state Legislature’s mandatory five-day recess, which provides legislators an opportunity to schedule public meetings in their districts to brief their constituents on major issues facing the Legislature. The recess is intended to encourage the public to review bills still moving through the Legislature. No formal floor action takes place during this recess.
Here are some of the bills introduced by Ruderman that have passed their first readings:
Another bill introduced by Ruderman has passed its second reading after a report on it from the Committee on Technology and the Arts was adopted. Neighbor Island video testimony, proposed by Ruderman as SB 369, would require both chambers of the Legislature to implement rules to permit residents to present testimony through audiovisual technology. The committee report states, “The utilization of audiovisual technology promotes equal access and invites greater participation in the legislative process, which is the cornerstone of democracy. Additionally, the use of videoconferencing saves Hawai`i residents on neighbor islands time and money because they incur significant costs to travel to Honolulu to provide testimony in person.” The bill has been referred to the Ways and Means Committee.
Ruderman said he encourages everyone to get involved by following legislation and providing testimony on these and other bills by registering at www.capitol.hawaii.gov/login/register.aspx; by subscribing to hearing notices and by providing testimony. He said the public can contact him by phone, email or mail to voice concerns about District 2, Puna through Ka`u, and also about statewide legislation.
His email is senruderman@capitol.hawaii.gov. His phone numbers are 808-974-4000, ext. 6-6890 and 808-586-6890. His mailing address is State Capitol, 415 S. Beretania Street, Room 217, Honolulu, HI 96813.


DURING A PREMIERE at the state Capitol, Gov. Neil Abercrombie and the Hawai`i State Department of Health on Thursday launched a new teen-focused multi-media campaign to combat obesity. The campaign is part of a comprehensive set of interventions being implemented by DOH to address obesity prevention.
Students, legislators, media and obesity prevention advocates got a preview of many of the television, radio, print and movie theater ads that will run statewide. The campaign began Friday and runs through May to reach youth ages 12 to18. The campaign will also use social media outlets to reach the target audience.
“It is essential that these messages resonate, starting with Hawai`i’s teens, so we enlisted their help in creatively developing how they will be presented,” said Abercrombie. “This campaign represents an ideal nexus of state government working with local students to ensure that public information messages intended for teens are effective and impactful.”
The campaign’s TV, radio and print ads were produced with the help of Hawai`i middle- and high-school students. After initial focus-group testing with teens to determine the concept, 10th graders from Island Pacific Academy acted as youth advisors for the campaign, advising DOH staff on the look and feel of the logos and print ads.
The theater ads were entirely student-produced videos. “The campaign counters the attractive promotion of unhealthy foods and drinks that are popular with our teens,” said Health director Loretta Fuddy. “Our goal is to begin the conversation with our youth on how marketing influences their over-consumption. We have found that Hawai`i teenagers have a great deal of purchasing power, so it’s important that they are made aware of how their decisions are swayed.” 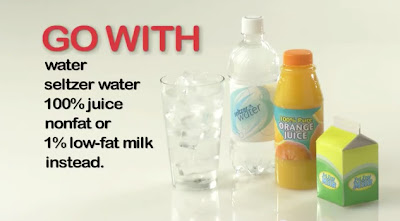 DOH reports that consumption of some unhealthy items, such as sugary drinks, is highest in the teen population, with nearly all teens (93 percent) reporting consumption within the past week. One-half (48 percent) reported consuming of at least one sugar-sweetened beverage per day.
A 2012 survey of over 600 Hawai`i teenagers also found that 63 percent of teens have more than $11 each week to spend any way they want to; over one-half of these had more than $20 of disposable income each week.
According to DOH, while 27 percent of high school students are currently overweight and obese, the figure is much higher among adults at 57 percent – more than one of every two adults. “With overweight and obesity rates more than double between high school and adulthood, it is important to address the issue with teens while they’re young and before they grow into adults,” added Fuddy.
The Office of the Governor says marketing messages around healthy eating and active living are a nationally recognized strategy to address obesity and a fundamental part of Hawai`i’s Physical Activity and Nutrition Plan. The state’s media campaign is integral to a comprehensive effort to reduce obesity and the chronic disease in Hawai`i.
The theater, television, radio, and print ads are funded with Tobacco Settlement funds.

HAWAI`I WILDLIFE FUND INVITES VOLUNTEERS to anchialine pool workdays Tuesday and Wednesday, when they will remove invasive weeds and excessive sediment by hand. To sign up, contact Megan Lamson at 769-7629 or kahakai.cleanups@gmail.com.
HWF staff also invite Ka`u residents to stop by their informational booth at Malama Kanaloa Ocean Day Festival along Hilo bayfront Saturday from 10 a.m. to 3 p.m. The event features free games, activities and live music for the whole `ohana.

ALSO SEE KAUCALENDAR.COM AND FACEBOOK.COM/KAUCALENDAR.
Posted by The Ka`u Calendar at 11:32 AM Links to this post