PRESERVATION OF NATIVE WILDLIFE by reducing the number of pigs, cattle, sheep and goats within Hawai`i Volcanoes National Park is the subject of a public meeting tonight at Na`alehu Community Center at 6 p.m. The park’s management plan and Environmental Impact Statement is up for public comment. The plan calls for fencing of park boundaries and some inner areas, along with aerial shooting and ground shooting of non-native ungulates and other measures to promote recovery and restoration of native vegetation and other natural resources, and to protect and preserve cultural resources.
The draft plan/EIS is available for review at Kilauea Visitor Center and state public libraries. It is also available online at parkplanning.nps.gov/havo_ecosystem_ deis.

THE KA`U GYM AND DISASTER SHELTER PLANS are open for preliminary public comment through today. Comments can be made by calling 961-8321 or emailing public_works@co.hawaii.hi.us. Public meetings, called charrettes, will be held Dec. 19 and 20, when the architect and engineering firm, along with county and school officials, will meet with the public from 5 p.m. to 8 p.m. both days at the Pahala school cafeteria.


BIOFUELS GROWN IN HAWAI`I should be reserved for transportation rather than electricity, according to an opinion piece by farmer and geothermal proponent Richard Ha and energy analyst Robert Rapier. The two wrote in Civil Beat yesterday that oil demand is outstripping worldwide supplies, leaving Hawai`i particularly vulnerable. “Hawai`i depends on oil for around 90 percent of its energy needs – a far greater percentage than any other state. It is divided roughly equally among ground transportation, jet fuel, and electricity generation.   Advanced biofuels are being contemplated to replace some of the oil used for electricity. However, there are many ways to produce electricity, but few scalable substitutes for jet fuel. To the extent that we can produce biofuels sustainably, they should be allocated to jet fuel or ground transportation, not electricity.
“We should work toward geothermal to provide the 80 percent of electricity referred to as ‘base power.’ This is the day and night power that is stable and predictable and prevents your lights from flickering. The other 20 percent, referred to as ‘intermittent power,’ can be provided by wind and solar,” the editorial states.
`Aina Koa Pono, which proposed making biofuel in Ka`u and building a refinery above Pahala, has said it is also interested in manufacturing fuel for transportation.

POST OFFICES ARE SAFE in Ka`u and Volcano, according to the list made by the U.S. Postal Service to cut more than $20 billion in expenses by 2015. Ocean View’s new post office, Na`alehu, Pahala, Volcano, and Hawai`i Volcano National Park post offices are not on the chopping block. However, the Postal Service announced yesterday that it is asking the U.S. Postal Regulatory Commission for cutbacks elsewhere, including consolidation of sorting centers on the mainland. This would mean overnight mail delivery would no longer be available, First Class Mail would take an additional day, Priority Mail would still take three days, and what is now overnight mail would take two days. Post offices may also close on Saturdays in Ka`u, Volcano and elsewhere.

BLACK HOLES that are some 2,000 times larger than the black hole at the center of the galaxy where planet Earth is spinning have been discovered by scientists right here on the Big Island, working on Mauna Kea. A Stephens Media story by Erin Miller says the discovery will be the subject of a story in this month’s journal called Nature. The astronomical find was made with help of the Gemini observatory, where scientists said that the monstrous black holes are more than 300 million light years away, posing no threat to Earth, as they consume stellar material. They are the largest black holes ever discovered, scientists said. 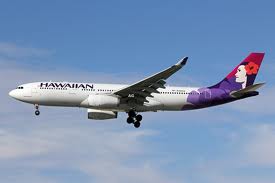 HAWAIIAN AIRLINES drew some local residents to O`ahu yesterday to line up with more than 2,000 people looking for jobs. Hawaiian Airlines is ramping up for more flights and more employees even though it already has the most employees in its history. Requirements include no visible tattoos and being tall enough to reach your hands 85 inches above the floor of the plane to be able to help passengers with overhead luggage and to handle emergency equipment.
The interviewing for Hawaiian Airlines jobs yesterday lasted from 8 a.m. to 7 p.m. Hawaiian is one of the only airlines in the U.S. that is expanding the number of its flights, adding new destinations and new employees, and signing up for new planes.

THE CONGRESSIONAL MEDAL OF HONOR FOUNDATION is looking for nominations of U.S. Citizens who could be eligible for Citizen Service Before Self Honors. These honors go to Americans who become extraordinary through their courage and selflessness. They allow living recipients of the Medal of Honor to choose and honor the unsung heroes. Local citizens can be nominated by completing a form online at citizenservicebeforeselfhonors.org. The nomination period runs through Feb. 10. A panel of Medal of Honor recipients will choose 20 national finalists to be announced Feb. 27. A second panel of Medal of Honor recipients will select three from the finalists to receive the Citizen Service Before Self Honor on Medal of Honor Day, next March 23, near the Tomb of the Unknowns at Arlington Cemetery. Two Ka`u residents, Tokuichi Nakano and Iwao Yonemitsu, flew to Washington, D.C. in November to receive Congressional Gold Medals for their own service in World War II.

THE ANNUAL PAHALA CHRISTMAS PARADE is getting organized, with churches, community groups and other groups building their floats. Organizer Eddie Andrade, who has sponsored the parade for more than 40 years, can be contacted at 928-0808. Participants meet this Sunday at 11:30 a.m. at Pahala Armory for the parade that begins at 1 p.m. and winds through Pahala, with refreshments at the Catholic Church following the procession.

CHRISTMAS IN KA`U will be sponsored by Thy Word Ministries-Ka`u at the Na`alehu Hongwanji Building on Hwy 11. The event on Saturday, Dec. 10 from 9 a.m. to 1:30 p.m. with song, hula, dance and free Hawaiian plate lunches is open to everyone. Vendor spaces are available by calling Pamela Taylor at 937-3386.

CHRISTMAS LIGHTS AT KMC go on next week. The annual Kilauea Military Camp cottage decorating contest allows employees of KMC to create a Christmas wonderland. The public can vote on the best-decorated cottage.