THE OLD PAHALA HONGWANJI schoolhouse is on its way to being restored for community activities. According to Wayne Kawachi, who is heading up the project, the building will be re-roofed, and a new septic system, required for hosting groups of people at church and school, was recently installed.
The schoolhouse was constructed in the early 1950s. A former larger school house and a traditional Buddhist temple burned down in World War II and was rebuilt with materials provided by the military, which had taken over the building during the war. In addition to being used as a Japanese school, the building was used as dojo for judo and kendo practice, with its exterior the site of an annual Bon Dance celebration. In more recent years it was an art teachers studio.
Kawachi said the building will be used for various community activities. AmeriCorps and the Boys & Girls Club did some work on the old school house several years ago. The next community effort is to re-roof it.

THE HAWAI`I VOLCANOES NATIONAL PARK PLAN to reduce wild cattle, sheep, pigs and goats inside its boundaries would give many native plants and animals a better chance of survival, according to an Environmental Impact Statement coming up for public meetings next month.
The National Park has been successful in removing herds comprised of thousands of goats that once roamed the Ka`u desert. It has fenced areas to keep out the pigs, goats, cattle and sheep that destroy the understory of the Ka`u forests in Kahuku and near Volcano. More than 50 threatened, endangered or candidate species live in these forests, with more than 80 species “of concern.”
A new effort to control the ungulates may include killing the animals and donating the game to the public, according to a story in Stephens Media. The story quotes Natural Resources chief Rhonda Loh, saying that upcoming public meetings on the park’s new ungulate management plan provide an opportunity for the community to give input on the subject.
Hunters often say they would like to be allowed to control the ungulates themselves and take home the kill to feed their families. However, a national policy within the parks prohibits recreational hunting for removing the invasive animals. Volunteers helping the park to remove the ungulates would be under supervision of park management and prohibited from taking home trophy heads, horns or meat. Animals would be left in place or moved away from a trail or road in the park. Other methods under consideration are aerial shooting, trapping and snaring the ungulates.
The public meetings in Ka`u will be held on Monday, Dec. 5 from 6 p.m. to 8 p.m. at the Kilauea Visitor Center in Hawai`i Volcanoes National Park and on Tuesday, Dec. 6, from 6 p.m. to 8 p.m. at Na`alehu Community Center.

BIG ISLAND UNEMPLOYMENT hovers around the national average, while the state overall has one of the lower unemployment rates in the country. O`ahu’s unemployment rate in October was 6.5 percent; Maui, Moloka`i and Lana`i averaged 7.5 percent; Kaua`i 8.5 percent and the Big Island 9.1 percent, according to the state Department of Labor & Industrial Relations. 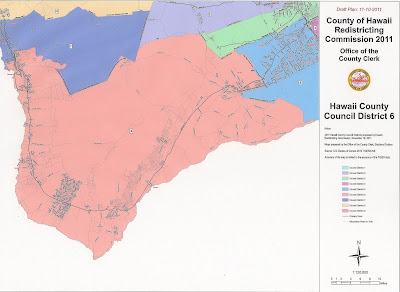 THE COUNTY REDISTRICTING COMMISSION holds public hearings on its final draft map this week. The map makes new District 6 boundaries, removing Kurtistown and Mountain View and adding Napoopoo, Captain Cook and Kealakekua. Kahaualea Road in Volcano is the northeastern boundary, and the border between Kealakekua and Honalo, on the mauka side of Hwy 11, is the northwestern boundary. The public hearings will be held tomorrow at the West Hawai`i Civic Center and on Tuesday at the Hilo Council Chambers, both at 6 p.m. See the proposed redistricting map at co.hawaii.hi.us/council/reapp/index.htm.
KA`U RESIDENTS ARE INVITED TO APPLY for openings on county boards and commissions. An opening exists on the Salary Commission, which establishes salaries for the mayor, the prosecuting attorney, County Council members and appointed officials. There is also a vacancy on the Pension Board, which deals with pensions of police and fire departments and the Hawai`i County Band.
Applicants should be active in and respected by the community, community minded and oriented, knowledgeable about and able to represent the entire community’s interests and concerns, and able to focus on Hawai`i County as a whole without undue influence by special or self interests.
Interested parties may pick up applications at the mayor’s office of Information and Complaints in Hilo or from the mayor’s office in Kona. For more information, call 961-8223.
CHRISTMAS IN THE COUNTRY at Volcano Art Center in Hawai`i Volcanoes National Park features art demonstrations, print and book signings by gallery artists, plus a selection of gifts offered only during the holiday season. The annual event includes a display, sale and competition by artists who make decorative and collectible wreaths from many kinds of materials. Christmas in the Country continues today and next Friday, Saturday and Sunday from 9 a.m. to 5 p.m. Park entrance fees apply.

THE HISTORY AND FUTURE OF ENERGY in Hawai`i is the topic this coming Tuesday at After Dark in the Park at 7 p.m. at Kilauea Visitor Center Auditorium in Hawai`i Volcanoes National Park. Kenyan Beals, Hawai`i Electric Light Company’s educational services coordinator, discusses how HELCO got its start, where we are today and plans for the future. Park entrance fees apply.
KEAUHOU BIRD CONSERVATION CENTER in Volcano Village holds its annual open house on Saturday, Dec. 3. Tours, beginning at 8 a.m., 10 a.m., noon and 2 p.m., showcase some of Hawai`i’s avian treasures including Puaiohi, Palila and `Alala. Big Island artists will exhibit their bird-related artwork. Reservations are required, and space is extremely limited. A suggested $10 donation and additional donations are welcome. Call 985-7218 or email kbccopenhouse@gmail.com.
A FLOATING LANTERN CEREMONY for the Ka`u community takes place Saturday from 11 a.m. to 7 p.m. at Punalu`u Black Sands Beach. It is sponsored by Ka`u Rural Health Community Association in partnership with the American Cancer Society and HMSA, according to KRHCA founder Jesse Marques. Registration is required, and donations will be used for a college scholarship fund for students enrolled in health careers. Participants are asked to bring a Community Thanksgiving potluck. There will be Taiko drummers, music, cultural dance, interfaith chants and prayers, followed by a lantern release into the ocean. For more information, call Ka`u Resource and Distance Learning Center at 928-0101.
Posted by The Ka`u Calendar at 10:23 AM Links to this post