TESTIMONY ON `AINA KOA PONO making yesterday’s deadline for submission to the Public Utilities Commission includes a statement from biologist Rick Warshauer, who lives in Volcano. The former county planner and retired U.S. Geological Service staff member who grew up in Hawai`i, centers his reasons for “strong opposition” to the proposal around water, lands, invasive species and cost of electricity.

“The amount of water to be used in the industrial processing plant (“Micro-Dee”) is water that is desperately needed for real agriculture in chronically dry Ka`u, and would be competing with legitimate agricultural use of the water. The water coming out of tunnels in the Ka`u Forest Reserve is both limited and very subject to fluctuating flows and much reduced output during droughts. Given that prolonged, recurrent droughts may be the new norm for Ka`u as global climate change progresses, industrial competition for tunnel or well water needs to be considered a threat to legitimate agriculture, particularly in the future. Who gets priority? Any pumping of basal well water to the elevation of the refinery would be expensive and adds to costs. If irrigation is needed for crops, it is even more expensive and wasteful.

“Competition by the `Aina Koa Pono operations, for both fee and leased lands, with cattle ranching, is likely to lead to a reduction in cattle ranching, given the well-funded potential of a HELCO-`Aina Koa Pono alliance. Granting this proposal would only drive the coffin nail deeper for ranching and result in loss of livelihoods for Ka`u ranchers, already hard-pressed by the protracted droughts. I doubt that few of these individuals would welcome alternative jobs in the refinery or growing operations. Will they be abandoned like the former Ka`u sugar workers?
“The Big Island is already plagued with growing numbers of invasive species appearing in more and more areas of vacant, agricultural, and natural resource lands, and the costs for control are high. To add more species and more areas of fast-growing fuel plants just adds considerably to the problem. If the crop plants are genetically modified and patented, does it add legal restraints of controlling errant crop plants for neighboring agriculture?
“The electrical needs of the proposed refinery are an enormous elephant in the room, especially given the intent of the oil to be produced is to be used in distant facilities to produce electricity. Add this to the fuel needed to grow, harvest and transport the crops to the refinery, not to mention the energy cost to haul it to the point where the fuel will be combusted, and the cost efficiency of the operation really comes into question. Where is a credible analysis of the cost and benefits of the proposal? Has the PUC seen one, a real one?
“One really needs to ask the question: Does it take more energy to produce the oil than can be derived from it? Keep in mind that the costs to do any operation in Hawai`i exceed those of similar operations from almost anywhere else, and this situation is amplified by the remote nature of Ka`u district. Again, has the PUC been provided with an outside objective assessment of the question? It seems to me that the only way this operation can be viable is to float it on the backs of the ratepayers. Then the PUC needs to ask who are the real beneficiaries of this proposal? It certainly is not us ratepayers. Should the unproven operation fail after any PUC approval, are not we ratepayers still stuck paying for it for decades?
“What if this operation is approved but then in the face of real expenses and constraints flops? Are we the ratepayers stuck bailing them out? We are already too burdened forking out taxpayer money to bail out the banks from their poor business-sweet bailout a few years ago. Is this to be more of the same? What happens to the land and facilities?
“Growing crops to refine oil to burn in the same HELCO generation facilities is not an alternative energy operation. It is still combustion of a fuel that adds more CO2 to the atmosphere. We need real alternatives, not alternative parasites.
“There needs to be a realistic comparison of this operation with truly renewable energy operations. One such would be a photovoltaic facility paired with a pumped-water generation component to provide at least part of its output to be firm power. One might consider doing a similar PV pairing with fuel cells or hydrogen-burning turbine for the firm power aspect. Either way, the facility could be geographically positioned where it could add power to the grid strategically to reduce the considerable line loss of power endemic in the HELCO grid. The current array of power production facilities relative to loads just wastes much of the produced power as line loss (ratepayers pay for it). HELCO’s proposed 20-year biodiesel supply contract with `Aina Koa Pono just continues this imbalance of load and production, and in turn perpetuates the wasteful line loss. Either way, the HEI investors have their “what-me-worry” guaranteed minimum profit, and the line loss continues to be ratepayer loss.
“It seems to me that the PUC is in the position to request an Environmental Impact Statement and a third party economic analysis before you rule on the proposal? The latter would address the real costs and benefits of the operations and their impacts on the ratepayers, and the former would make an assessment on the other costs and impacts to affected parties and environment. Please do so. We all deserve the answers now. As we have seen before, HELCO and its sister affiliates on other islands will continue to propose ineffective and expensive scams to extract more money from their captive ratepayer pool of fools. We have no say—It is up to the PUC to do the right things for us. Please do so.
“In the process, you might seek to assess if Hawai`i County might be better off if we had a cooperative running the utility, or even a county affiliate, rather than the blood-sucking HELCO operation. At least the operation would be with a nonprofit motivation rather than the sure-profit deal that the HEI affiliates have for their shareholders. The way it is run now, especially with the parasitic avoided cost provisions, only the HEI investors win with guaranteed minimum returns. This is just a government-sanctioned shakedown of the ratepayers. If it works for the folks on Kaua`i then it could work for us. PUC members and Mayor Kenoi, are you listening?” Warshauer asks.

PAUL MAKUAKANE, OF MARK TWAIN, writes: “I am a lifetime resident of Ka`u and of the aboriginal descendants of this island. I feel this `Aina Koa Pono project is unsafe and unhealthy for the residents of Ka`u, the `aina as well as for the ports, if an accident should happen there. I think the PUC should not approve of this project due to health and safety issues for the future. We have no foresight of where the area might be contaminated, and everyone would have to leave the area. The cost of the biofuel for a 20-year contract sounds unreasonable as the cost will be shared among all users and myself. I oppose the `Aina Koa Pono Project.”
Makuakane signs his letter with, “Aloha `aina kulaiwi, Malama `Aina, Maka`ainana, Kama`aina and Ua mau ke ea o ka `aina ika pono.

TED STETHEM, OF PAHOA, writes that “the `Aina Koa Pono contract needs to be disapproved. Biodiesel has not proven to be cost competitive, (and the) result has been the cost of biodiesel per gallon is always more than diesel at the pump, sometimes several times.” He contended that project is being endorsed by HELCO because it would mean HELCO would not have to alter their exiting power plants. He points out that an alternative energy act of 2008 mandated HELCO to retire their diesel-electric plants as other alternatives became available to produce equivalent power or more.

“IT IS WITH MUCH ALOHA that I say to you now, a hui hou, see you again,” said Sen. Daniel Akaka, who chaired the U.S. Senate Indian Affairs Committee for the last time this week. Akaka, 88, retires on Jan. 2 after 22 years in the Senate. He served in the U.S. House from 1976 to 1990, when he was appointed to the Senate following the death of U.S. Sen. Spark Matsunaga. He won a special election to the Senate in 1990 and was re-elected in 1994, 2000 and 2006.
Akaka sponsored the Native Hawaiian Recognition Bill, also known as the Akaka Bill, to create a process for Native Hawaiians to gain federal recognition as an indigenous people. Supporters have been unable to gain passage of the bill in Congress.
“As I begin the difficult task of closing my offices, I want to take this time to thank you for allowing me the honor and privilege to serve you for 36 years,” Akaka says on his website. “I am proud of my accomplishments on behalf of our federal workers, consumers, veterans and all the people of Hawai`i. You have always been my first and foremost priority.”
See more testimony and other documents at puc.hawaii.gov/dockets. Docket number is 2012-0185.

FIVE MILLION DOLLARS for tsunami debris cleanup is pledged by Japan, which announced the gift to the U.S. government yesterday. Japan’s Prime Minister Yoshihiko Noda promised the gift to Defense Secretary Hillary Clinton, according to a report in this morning’s Washington Post. The announcement was made yesterday by Japan’s Foreign Ministry. The money will be split between Hawai`i, Alaska, Washington, Oregon and California and will be managed by the National Oceanic and Atmospheric Administration. Hawai`i already received a $50,000 pledge from NOAA. The tsunami followed a 9.0 earthquake in Japan on March 11, 2011. A big yellow thing made of metal is largest item that has washed up on the Ka`u coast since the tsunami, but is unconfirmed as tsunami debris. However, numerous items with Japanese writing were reported by an NBC story featuring Kamilo Beach in Ka`u earlier this week.

TONIGHT IS DIGITAL MOUNTAIN FILM FESTIVAL at 6 p.m. at Kilauea Visitor Center Auditorium in Hawai`i Volcanoes National Park. The public can still view 11 films by students from Ka`u and Puna at youtube.com/user/digitalmountain2012 and vote for their favorite by sending an email to kupono_mcdaniel@nps.gov. The winner receives a MacBook Air, and additional prizes are awarded to the top film, chosen by judges, in categories 7th - 9th grade and 10th - 12th grade. 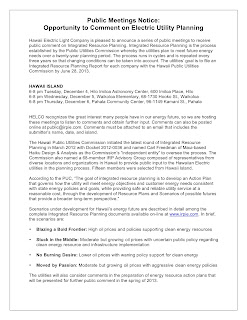 HELCO MEETINGS TO GATHER public comments on electric utility planning take place from 6 p.m. to 8 p.m. Tuesday in Hilo, Wednesday in Kona and Thursday in Pahala. See notice at right for more information.

VISIT OUR SPONSORS AT WWW.PAHALAPLANTATIONCOTTAGES.COM AND WWW.KAUCOFFEEMILL.COM. KA`U COFFEE MILL IS OPEN FOR THE HOLIDAYS SEVEN DAYS A WEEK.