HAWAI`I MEMBERS OF THE U.S. HOUSE OF REPRESENTATIVES broke rank this week in voting on whether the federal government should be allowed to continue to collect telephone call records, emails and other digitally communicated messages from the general population. The vote on the Amash-Conyers amendment saw Democrats and Republicans voting both sides of the issue, rather than voting party line. The amendment to the authorizing legislation for the Department of Defense budget would have stopped wholesale collection of data on U.S. citizens. It would have allowed such phone and Internet data collecting only on those being specifically investigated for specific crimes. To comment on this story, go to https://www.facebook.com/kaucalendar.


VOTING TO STOP MASS DATA COLLECTION was Ka`u’s Rep. Tulsi Gabbard, herself a military veteran of Middle East warfare. During floor debate on stripping funding for such activities, Gabbard spoke out against “sweeping collection of personal data by the National Security Administration and the continued funding of invasive surveillance programs that target innocent Americans,” a statement from her congressional office said.
“Countless men and women from my state of Hawai`i and all across the country have worn the uniform and put their lives on the line to protect our freedoms and our liberties,” said Gabbard. “I cannot in good conscience vote to take a single dollar from the pockets of hard-working taxpayers from across the country to pay for programs which infringe on the very liberties and freedoms our troops have fought and died for. Ben Franklin said, ‘They who give up liberty to obtain a little temporary safety deserve neither liberty nor safety.’”
The House rejected the amendment by a vote of 217-205.
In another effort to scale back the data collecting, Gabbard was one of 22 Democrats and 24 Republicans in the House - and the only one from Hawai`i - who introduced the NSA Surveillance Act in June. H.R. 2399 is called the Limiting Internet and Blanket Electronic Review of Telecommunications and Email Act. This LIBERT-E Act would restrict the federal government’s ability under the Patriot Act to collect information on Americans who are not connected to an ongoing investigation. The bill would also require secret Foreign Intelligence Surveillance Act court options to be made available to Congress and summaries of the opinions to be made available to the public.
Referring to revelations by former Hawai`i resident and security contractor Edward Snowden, who has been charged with espionage by the U.S. government, the coalition issued a statement saying, “The recent NSA leaks indicate that the federal government collects phone records and intercepts electronic communications on a scale previously unknown to most Americans.
“The LIBERT-E Act imposes reasonable limits on the federal government’s surveillance. The bill puts some teeth into the FISA court’s determination of whether records the government wants are actually relevant to an investigation. It also makes sure that innocent Americans’ information isn’t needlessly swept up into a government database. LIBERT-E prohibits the type of government dragnet that the leaked Verizon order revealed.
“We accept that free countries must engage in secret operations from time to time to protect their citizens. Free countries must not, however, operate under secret laws. Secret court opinions obscure the law. They prevent public debate on critical policy issues and they stop Congress from fulfilling its duty to enact sound laws and fix broken ones.
“LIBERT-E lets every congressman have access to FISA court opinions so that Congress can have a more informed debate about security and privacy. And the bill requires that unclassified summaries of the opinions be available to the public so that Americans can judge for themselves the merit of their government’s actions.
“We are proud to lead a broad, bipartisan coalition that’s working to protect privacy. It shouldn’t matter whether you’re a Democrat or a Republican. Defending the Constitution and protecting Americans’ rights should be an effort we all can support.”
The LIBERT-E Act was assigned to a congressional committee. To comment on this story, go to https://www.facebook.com/kaucalendar.

VOTING TO CONTINUE MASS DATA COLLECTION by opposing the amendment to the Department of Defense appropriations bill that would have stopped such information gathering was urban Hawai`i congresswoman Colleen Hanabusa. She stood by the NSA data operations for now but said she has deep concerns. A statement from her congressional office says:
“I believe that much of the PATRIOT Act is problematic and overreaches on the powers we intend to grant the government to protect our national security. This is why I voted against its extension in February 2011.
“However, elimination of a national security program requires an informed, transparent, and deliberative process. Quick fixes like the Amash amendment could have unintended consequences for the intelligence and law enforcement communities beyond the specific problems being targeted. A provision of this nature deserves a more meaningful forum than an amendment to a defense appropriations bill with debate limited to ten minutes on each side, far less time than required to discuss such complex matters of policy. This issue should be the subject of a stand-alone bill that provides a complete review in an open forum involving all stakeholders, including the American public. If a thorough review shows that the law is bad, we should repeal it, not simply de-fund it.
“Instead, I voted in favor of the Pompeo Amendment, which would prevent the National Security Agency from using appropriated funds for the bulk monitoring, collection, or storage of Americans’ telephone and electronic communications. My vote was to reinforce safeguards that would prevent the NSA from spying on American citizens while evaluating the NSA program, including its impact on our citizens and its effectiveness in providing for our nation's security.
“I look forward to supporting and continuing a full debate on the appropriate balance between national security and civil liberties,” Hanabusa concluded.
The vote on the amendment to curtail government data collecting was 111 Democrats favoring curtailment and 83 votes against and 94 Republicans favoring curtailment and 134 against.
To comment on this story, go to https://www.facebook.com/kaucalendar.

PRESIDENT OBAMA HAS PROCLAIMED TODAY, the 60th anniversary of the armistice that ended one of the bloodiest wars in American history, National Korean War Veterans Armistice Day. Sen. Mazie Hirono, a member of the Armed Services and Veterans’ Affairs committees, said, “This weekend, I ask all Hawai`i residents to remember those brave Americans who served alongside our allies to defend our freedom and stop the spread of communism in Korea. Some have dubbed the conflict ‘the forgotten war,’ but to the families of the more than 36,000 Americans who died and the countless others who were wounded, the physical and emotional scars remain. More than 10,000 surviving veterans live in Hawai`i, many of them in their eighties. These veterans have earned the respect of succeeding generations.
“In Hawai`i, we understand the sacrifices made by these men and women in order to secure the Pacific. The war taught us the importance of eternal vigilance. Many Hawai`i residents have ties to Korea or loved ones still living there. We must be ready to protect our state and allies from aggression in the Pacific. As we honor the memory of those who fought six decades ago, let’s recommit ourselves to the defense of the liberty and freedom for which they sacrificed.”
To comment on this story, go to https://www.facebook.com/kaucalendar.

TROPICAL STORM FLOSSIE IS EXPECTED TO REACH Hawai`i Island Monday afternoon. While not a hurricane, drenching rains are expected, with the possibility of flash floods and mudslides.

PROHIBITION OF GMO CROPS IN HAWAI`I COUNTY will again be considered at a special meeting of the Public Safety & Mass Transit Committee on Tuesday at 9 a.m. at West Hawai`i Civic Center in Kona. The committee chair is Ka`u’s Council member Brenda Ford. This is a continuation of meetings held July 2 and 3 when hundreds of Big Island residents offered testimony on Bill 79, proposed by Kohala Council member Margaret Wille.

THE ALOHAHAS, AN IMPROVISATIONAL, comedic sketch company, perform at Ocean View Community Center at 7:30 p.m. Doors open at 7 p.m. Admission is $10 per person, 18 and older.
Cast members will perform original comedy sketches and a series of improvisational games with suggestions from the audience.
For more information about the show and cast, see thealohahas.com, email thealohahas@gmail.com or call 345-2751.

VOLUNTEERS CAN STILL SIGN UP FOR MONDAY and Tuesday’s anchialine pool/plant workdays sponsored by Hawai`i Wildlife Fund. Volunteers meet at Wai`ohinu Park at 7:45 a.m. to carpool to the site. Register at 769-7629 or kahakai.cleanups@gmail.com. 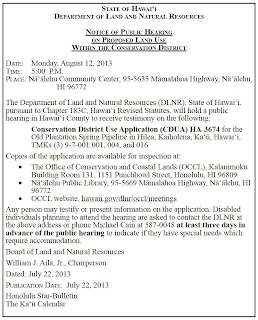