IT’S VETERANS DAY AND TULSI GABBARD, who represents Kaʻū, Volcano and the rest of rural Hawaiʻi in the U.S. Congress, is keynote speaker at Kīlauea Military Camp's ceremony at 3 p.m. this afternoon in Hawaiʻi Volcanoes National Park. Gabbard, of Samoan birth, grew up in Hawaiʻi. She is the first member of Congress of Hindu religion and a member of the House Armed Services Committee and the House Foreign Affairs Committee. She is a graduate of Hawaiʻi Pacific University, with a business administration degree, and U.S. Army Officers Candidate School.
Gabbard is a Major in the Hawaiʻi National Guard. She joined the Guard in 2004 and received several distinguished honor graduate titles and awards at Basic Combat Training and Advanced Individual Training.
In July 2004, at the age of 21, the youngest person to be elected to the Hawaiʻi Legislature, Gabbard asked to deploy with her Hawaiʻi National Guard unit. She volunteered for a 12-month combat tour in Iraq, where she would serve in a field medical unit as a specialist with a 29th Support Battalion medical company. When she learned she would no longer be able to simultaneously perform her duties as a legislator and deployed member of the National Guard, she chose deployment over running for  a second term in office. In Iraq, Gabbard served with the Guard at Logistical Support Area Anaconda.
While in England on rest-and-relaxation in August 2005, she presented Hawaiʻi’s condolences to the government of London in the wake of the 7/7 terrorist attacks. She was awarded the Meritorious Service Medal at the end of her Iraq tour.
Upon her return from Iraq in 2006, Gabbard served as legislative aide for U.S. Sen. Daniel K. Akaka in Washington, DC.,  responsible for issues involving veteran affairs, energy and natural resources, judiciary, and homeland security. She served as a surrogate speaker for Akaka on many occasions, and built a grassroots network with the veteran community in Hawaiʻi.
While working for the Senator, Gabbard graduated from the Accelerated Officer Candidate School at the Alabama Military Academy in March 2007. She was the first woman to finish as the distinguished honor graduate in the Academy’s 50-year history. She was commissioned as a Second Lieutenant and assigned again to the 29th Brigade Special Troops Battalion of the Hawaiʻi Army National Guard, this time to serve as the Military Police Platoon Leader.

Gabbard continued to work for Akaka until 2009, when she again voluntarily deployed with her unit to the Middle East. During her second deployment, in addition to leading her platoon on a wide variety of security missions, she conducted non-military host-nation visits and served as a primary trainer for the Kuwait National Guard. She was one of the first women to set foot inside a Kuwait military facility and became the first woman awarded and honored by the Kuwait National Guard for teaching soldiers training and readines.
In June 2011, Gabbard visited Indonesia as part of a peacekeeping training with the Indonesian Army. In the same year, she was elected to the Honolulu City Council, while continuing her work in the Hawaiʻi National Guard.
Since becoming a member of Congress in 2012, Gabbard has been frequently interviewed on CNN and other networks for her commentary on veteran, military and foreign affairs. She and was reelected last Tuesday. She is a frequent visitor to Kaʻū.
To read comments, add your own, and like this story, see Facebook. Follow us on Instagram and Twitter. 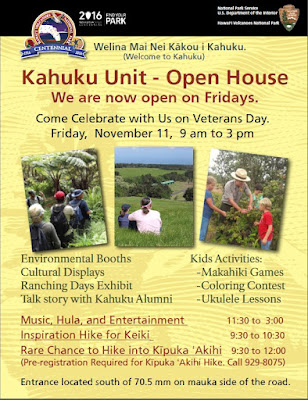 HAWAIʻI VOLCANOES NATIONAL PARK FREE ENTRANCE is today, Nov. 11, when national parks across the country waive fees for Veterans Day in honor of the men and women who have served the nation. Volcanoes Park has dozens of veterans among its employees and volunteers. Active duty U.S. military can obtain a free annual Military Pass at the park’s entrance station all year. For more information on the free Military Pass, visit the park website http://www.nps.gov/havo/planyourvisit/fees.htm.

LIVING WITH VOG, particularly in winter when trade winds blow on and off, is the subject of this week’s Volcano Watch from Hawaiian Volcano Observatory scientists working for the USGS.  “Volcanic air pollution from Kīlauea, known as vog, is distributed across the island, and sometimes the state,” write the scientists.
“As winter approaches, many Island of Hawai‘i residents eagerly await the appearance of sub-tropical snow atop Mauna Kea and Mauna Loa. Another common occurrence on Hawai‘i Island during winter months is the frequent interruption of the steady northeasterly trade winds. These winds, or the lack of them, play a leading role in determining where volcanic air pollution from Kīlauea, known as vog, is distributed across the island, and sometimes the state.
“Vog, caused by sulfur dioxide gas (SO2) emitted from Kīlauea, has been a frequent problem on the Island of Hawai‘i for the past 30 years. Since the onset of the summit eruption in 2008, there has been a dramatic increase in the amount of SO2 and other gases released from the volcano and in the damaging effects of vog on the island.
“From May to September, trade winds blow 80-95 percent of the time, but from October to April, the frequency drops to 50-80 percent. On Hawaiʻi Island, the districts of Ka‘ū and Kona bear the brunt of vog during northeasterly trade winds. But when trade winds are absent, areas impacted by vog can include East Hawai‘i, the whole Island of Hawai‘i, and, at times, the entire State of Hawai`i.
“For this winter’s vog season, new resources are available to help people become familiar with, and minimize their exposure to, vog.
“A new internet-based ‘Hawaiʻi Interagency Vog Information Dashboard’ ivhhn.org/vog provides a user-friendly starting point to search for information about vog. Topics on this dashboard include vog forecasts, real-time vog concentrations, health effects and environmental impacts of vog, and how people can protect themselves from vog, as well as links to published scientific literature.
“The dashboard also leads users to a new suite of concise vog information products. These products, which include a booklet of frequently asked questions and a brochure and poster on protecting yourself from vog, are available online ivhhn.org/vog/vog-fact-sheets, where they can be viewed or downloaded. Print copies of these vog information products are available through the Hawai‘i Department of Health District offices. They are also in the process of being distributed to public libraries and schools around the Island of Hawai‘i.
“If you’re interested in how your neighbors cope with vog, check out these new products, as they incorporate information and protection strategies gathered through community surveys in 2015. The surveys, which were conducted by an international researcher in cooperation with the USGS Hawaiian Volcano Observatory, examined the strategies used by Hawai‘i Island residents who live with vog, and how those people would like to receive information and guidance about vog.
“If you’d like to know when vog might be in your area, a dashboard link takes you to vog and wind forecasts, which include the University of Hawai‘i at Mānoa Vog Measurement and Prediction Project weather.hawaii.edu/vmap/. This vog model provides an animated two-day forecast of SO2 gas and sulfate particle concentrations for the State of Hawaii. Many people find this forecast useful for planning outdoor activities to minimize their exposure to vog.
“As SO2 travels away from Kīlauea Volcano’s eruptive vents, it is gradually converted (through chemical reactions in the atmosphere) from a gas to solid particles and liquid droplets. So, in areas close to the vent, SO2 gas is a component of the vog. But in areas distant from Kīlauea, like West Hawai‘i, or on other Hawaiian islands, vog is composed of particles, with virtually no SO2 gas in the mix.
“The Hawaii Department of Health ‘Hawaiʻi ShortTerm SO2 Advisory’ http://hiso2index.info/, which provides data on current SO2 gas levels, is extremely helpful for areas close to Kīlauea. But for West Hawaiʻi (Kona) residents, the more relevant particle information is available through the vog dashboard link to ‘AirNow particle data’ ivhhn.org/vog/current-air-quality.
“Gas emissions from Kīlauea have decreased somewhat since the summit eruption began in 2008, but vog continues to challenge Hawaiʻi communities, causing impacts to health, agriculture, and infrastructure. Learning how to identify when vog is in your area, and how to protect yourself and your family when necessary, are adaptations to living with the remarkable volcano in our backyard.
“Hopefully, the new information products and online dashboard will help Hawaiʻi residents to understand and adopt strategies for living more comfortably with vog,” the scientists conclude.
Visit the HVO website http://hvo.wr.usgs.gov for past Volcano Watch articles, Kīlauea daily eruption updates, Mauna Loa weekly updates, volcano photos, recent earthquakes info, and more; call for summary updates at 808-967-8862 (Kīlauea) or 808-967-8866 (Mauna Loa); email questions to askHVO@usgs.gov.


ARTWORK TO BE CHOSEN FOR THE COVER of The Directory, the annual Kaʻū Chamber of Commerce community resource and business guide, will be accepted at Naʻalehu Hongwanji, Monday, Nov. 14, between 9 a.m. and 6:30 p.m. The annual show entitled The Beauty of Kaʻū opens with free entry to the public on Tuesday, Nov. 15 through Friday, Nov. 18, from 9 a.m. to 6 p.m. at the Naʻalehu Hongwanji Breezeway.
All entries are eligible to win popular vote (the cover) including youth and keiki, with the exception of all previous cover winners. Registration is $5 per adult entry, $2.50 per youth entry and $1 per keiki entry. Prizes will be given for: photography, sculpture, woodworking, quilting, jewelry, lei, graphics, painting and weaving. There are separate youth and keiki categories.
Entry forms are available at local schools and merchants, on the Chamber website and at the door during art drop-off hours. The Directory is published in January.

SUPPORT OUR SPONSORS AT PAHALAPLANTATIONCOTTAGES.COM AND KAUCOFFEEMILL.COM. KAʻŪ COFFEE MILL IS OPEN SEVEN DAYS A WEEK.

Posted by The Ka`u Calendar at 7:22 AM Links to this post