RED LIGHT CAMERAS that could detect drivers passing through stop lights and cameras that could detect speeding vehicles could be in the future for Hawai`i. Bills in the state Legislature are getting some traction for the photo red light detector systems that have already been adopted in such places as Los Angeles. Proponents note that such cameras could help do the work of police officers who otherwise have to sit by the side of the road and wait for the violators. It could free them up for investigating other crimes, said testimony submitted to the Legislature. Other testimony noted that knowing cameras are on the highway could deter people from speeding and going through red lights. The legislation would leave it up to each county to decide whether to adopt the program, and each county would keep fines it collects. Opposition has included a statement that a police officer can chase down a speeding car and get it off the highway and check the driver for alcohol and drugs, while a camera has no such ability. A police officer can also respond to medical emergencies on the roads. Another limitation is that the camera would have to capture a clear photo of the driver to prove who is breaking the law.
Opposition testimony says that there is collection of too much personal information by filming everyone driving along the highway, and the American Civil Liberties Union has posted concerns. The legislation is House Bill 2790 and can be read, along with pro and con testimony, at www.capitol.hawaii.gov.

THE BABY BOY WHO DIED when a van flipped on Highway 11 at 5 p.m. on Thursday was breast-feeding at the time of the accident. The family was driving from Volcano toward Pahala and on to accommodations at Waikoloa, according to reports from Hawai`i News Now. While there was an infant car seat in the van, the mother had taken the baby into her lap for feeding. The father was driving when the van veered off the road and turned over. He told police he was tired after a long day of touring and may have dozed off. The family, all visitors from Japan, suffered injuries, with three women remaining in serious condition.

The Pahala Community Center was used as a staging area for lifting victims by helicopter to Hilo Medical Center where the infant died. “From this tragic incident you can see what happens when you take the child out of the car seat. The child probably would have survived if he was in the car seat,” said Sgt. Christopher Gali, of Hawai`i Police Department. Police are investigating the crash as a negligent homicide, but since drugs or alcohol are unlikely, they will probably refrain from filing charges against the father, even though it is law that children three years and under be in a car seat, with four to seven-year-olds strapped into a booster seat. There are many incentives for using infant and booster seats, including tax deductions and the grim statistics of injuries and deaths during accidents when they are not used.
MONGOOSE ERADICATION is the aim of the state Board of Land & Natural Resources. The land board, which met this week, discussed working with the state and federal government, along with the counties, to come up with a program to rid the islands of these invasive species. Along with feral cats, mongoose are considered one of the main reasons that ground nesting birds are in decline in Hawai`i. Some concern has come from the Humane Society on whether poison would be used and whether that could kill pets and wildlife. Another concern is whether wild chickens will replace mongoose and compete with wildlife as happened on Kaua`i where there are no mongoose.

HUMPBACK WHALE COUNT is on the agenda for today at Kalae, Punalu`u and sites within Hawai`i Volcanoes National Park. The annual 2012 Sanctuary Ocean Count is held until noon, as volunteers record the behavior of the whales over the four-hour period. More than 60 sites along the shores of the Big Island, O`ahu and Kaua`i have been selected for the count. To learn more, visit http://hawaiihumpbackwhale.noaa.gov. The final 2012 whale count is scheduled for Saturday, March 31. Register online or call 1-888-55-WHALE, ext. 253. 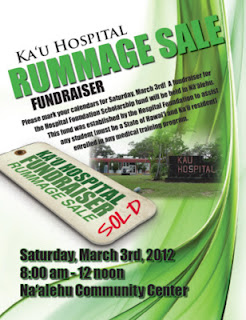 DONATIONS FOR A RUMMAGE SALE to benefit Ka`u Hospital Charitable Foundation’s scholarship fund are being accepted today. The scholarship fund assists any Ka`u student enrolled in any medical training program. Items can be dropped off at Kama`aina Kuts behind Na`alehu Ace Hardware through Saturday. The rummage sale takes place next Saturday, March 3. Call Ursula at 896-2624.

A SPAGHETTI DINNER to benefit Ka`u Hospital is from 4 p.m. to 7 p.m. today at Na`alehu Community Center. The dinner is sponsored by the Ka`u Red Hat Ladies and Kalae Quilters. Tickets are $9.99 and can be purchased at the door.

HAWAIIAN CRAFTS, GAMES, AND HULA are are on the schedule at Honu`apo Park tomorrow from 1 p.m. to 4 p.m. `O Ka`u Kakou will sell shave ice and hot dogs, the Hawaiian Civic Club will sell their hand-made Hawaiian items, and Ka `Ohana O Honu`apo will sell T-shirts, water and juice.

SEE OUR SPONSORS ONLINE AT KAUCOFFEEMILL.COM AND PAHALAPLANTATIONCOTTAGES.COM.
Posted by The Ka`u Calendar at 10:14 AM Links to this post