THE NATIONAL GOVERNORS ASSOCIATION winter meeting is the destination of Gov. David Ige, who took off for Washington, D.C. Tuesday with First Lady Dawn Amano-Ige. The governor will join other governors from across the country to discuss a wide range of topics that are important to the future of the State of Hawai‘i. Ige said those topics include energy, early childhood education, transportation, homeland security, cybersecurity, public safety, health care reform, conservation management and species preservation.

Ige and other governors plan to meet with members of President Trump's new administration to discuss energy, transportation, defense and homeland security. Hawai`i's First Lady is scheduled to participate in a National Governors Association discussion on the evolving role of governors' spouses in the 21st century.
The Hawai`i governor is also expected to attend a Governors' Lunch hosted by Vice President Mike Pence at his new offical home, operated by the U.S. Navy on Observatory Circle.
Sessions at the conference include: Critical Infrastructure and National Resource Conservation and Public Lands; Governor's: Leading the Laboratory of Democracy; Ending Childhood Hunger: Improving Lives and Investing in America's Future; Early Childhood Education: A Foundation for Economic Success; National Infrastructure Bank; and Meet the Threat: States Confront the Cyber Challenge. One of the keynote speakers will be new Secretary of Transportation Elaine Chao during a presentation on Infrastructure Spurring Innovation.
Sunday night will be an Evening with the President and First Lady at the White House, hosted by Donald and Melania Trump.
Hawai`i governor's office announced that Ige and Hawai`i's First Lady will be traveling with two staff members. The total cost of the trip is approximately $13,300. The return trip is Feb. 28.
The National Governors Association is a bipartisan organization of the nation’s governors that promotes visionary state leadership, shares best practices and speaks with a collective voice on national policy.
See more at www.nga.org.

HAWAI`I AND OTHER STATES WILL FOCUS ON INFRASTRUCTURE FINANCING, according to the National Governors Association, which meets in Washington, D.C. this week, with Hawai`i's  Gov. David Ige attending. Its report released this month called, State and Local Fiscal Facts: 2017, outlines the fiscal condition of state and local governments.
According to the report, "In particular, as states and Congress look to strengthen America’s infrastructure under the new Administration, municipal bonds remain a critical tool to financing the construction or improvement of schools, streets, highways, hospitals, bridges, water and sewer systems, ports, airports and other public works.
"Between 2007 and 2016, states, counties and other localities invested $3.8 trillion in infrastructure through tax-exempt municipal bonds; the federal government provided nearly $1.5 trillion." National Governors Association Executive Director and CEO Scott Pattison said, “Now more than ever, it remains critically important that governors have as many tools available in the toolbox to maintain and repair America’s infrastructure. Governors look forward to working with the President to creating a 21st century infrastructure system that boosts the economy.”

HAWAI`I WORKERS HAVE THE MOST MONEY TAKEN OUT OF PAYCHECKS, according to a study of all 50 states and the District of Columbia by GoBanking. Workers in Hawai`i earning $50,000 a year, have about $500 every two weeks taken out of their paychecks.  Those earning $100,000 a year, see a biweekly deduction of $1340.95 The sates where is the most is deducted are Hawai`i, followed by Oregon, Idaho, South Carolina and Minnesota.
The states where the least is deducted are all the states with no state income tax. They are Alaska, Florida, Nevada, New Hampshire, South Dakota, Tennessee, Texas, Washington and Wyoming. Still they take out $402.93 every two weeks for those earning $50,000 a year. For those earning $100,000, the deduction is $1032.83. See more at gobankingrates.com

THE KA`U CONCERT BAND meets for weekly practices or rehearsals on Fridays from 4 p.m. to  6p.m. at St. Jude's Church in Ocean View. The band welcomes musicians, who can play woodwind, brass or percussion instruments, as members. The band performs several times a year at various venues in and around Ocean View.
The Band has a number of instruments which can be loaned to musicians who need one. 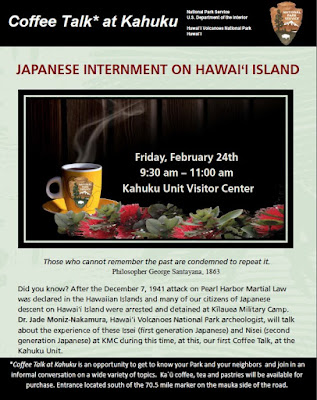 The Band was known as the Ka'u Ohana Band, but changed its name in January. Ben Houghton is among the conductors.

Book Signing at Na`alehu Library, Wednesday, Feb. 22 at 2:30 p.m.  will feature Emily Rodavich, author of Mystical Interludes: An Ordinary Person's Extraordinary Experiences. The event is free to the public.

Japanese Internment on Hawai`i Island is the subject of the first  Coffee Talk at Kahuku. It will be held this Friday, Feb. 24 at the Kahuku Unit Visitor Center at Hawai`i Volcanoes National Park. Dr. Jade Moniz-Nakamua will talk about the experience of Japanese Issei and Nisei at Kilauea Military Camp during World War II. Free.

Ka`u Hospital Community Input Meeting, Sat, Feb 25, 1:30 p.m. at the hospital. Kurt Corbin, Chair of the East Hawai`i Regional Board of the Hawai`i Hospital System Corp, which oversees the hospital and clinic operations, said that "Personal conversations and dialogue with our community stakeholders are absolutely essential in helping guide the decisions that the Regional Board must make."
Board members and administrators will be on hand and a financial overview and future outlook will be presented. For more information, contact Terry Larson, Regional Board Secretary at 932-3103.

Soil and Composting class at Ka`u Farm School on Sunday, Feb. 26 at Earth Matters Farm on the corner of South Point Road and Kama`oa Road, 2 p.m. to 6 p.m. Special guests include Rep. Richard Creagan, Chair of the Agriculture Committee of the state House of Representatives and Melanie Willich, Director of the Young Farmers Program at Kohala Center. Free, sponsored by Kohala Center and Hawai`i Farmers Union United. Donations accepted. RSVP to kaufarmschool@gmail.com or call 808-721-6977. 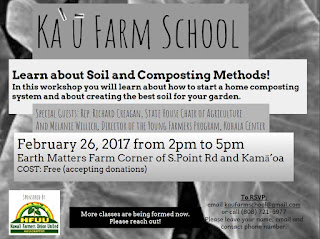 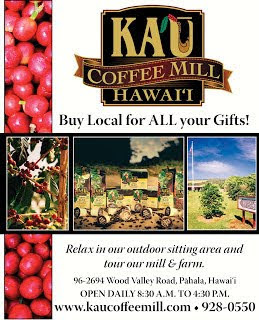 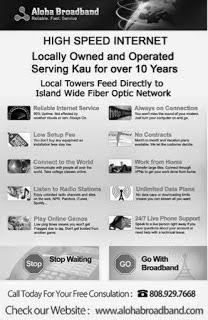 Posted by The Ka`u Calendar at 10:30 PM Links to this post