AGRICULTURAL THEFT can be combated through cooperation among police officers and the local community, said County Prosecuting Attorney Mitch Roth last night. During a meeting at Pahala Community Center, sponsored by Ka`u Farm Bureau, he discussed recent theft of coffee from fields and drying pads.
The thievery hits hard on one of the most successful post-plantation economic developments in the state. It is particularly damaging to the Ka`u economy as farmers are starting to make a good living i Ka`u Coffee  after more than 16 years of hard work, following the closing of Ka`u sugar in 1996 when many of them lost their jobs.
Roth described Ka`u Coffee as an agricultural product that has risen to the top in international reputation. Thieves are hitting some of the most successful of these farmers whose ability to make a living and the livelihood of their workers depends on getting the famous Ka`u Coffee beans to market.
Some thieves are stealing at night, thrashing through fields, breaking branches as they grab for coffee cherries. Thieves sneak into places where coffee is processed to haul bags of parchment to cars and trucks waiting on rural roads, coffee farmers reported.
Roth urged farmers and police officers to understand that this kind of agricultural theft is a felony – Theft in the Second Degree. He urged farmers to post no trespassing signs, saying “Private Property,” “No Trespassing,” with letters at least two inches high. Lorie Obra, owner of Rusty’s Coffee farm, asked whether she could install a bear trap, as some of her renowned coffee cherries have been stolen. The prosecuting attorney said that traps that would injure thieves intentionally and also shooting guns at theives are not allowed. He urged farmers and ranchers, however, to fence areas, when possible.
He said that stealing even 25 pounds of coffee is a felony. Stealing equipment and supplies used to grow or process the coffee when their value is over $100 is also a Class Two Felony – earning jail time when convicted.
He also warned that farmers, coffee buyers and sellers delivering coffee should always carry with them a certificate, receipt or log book showing origin of coffee in their vehicls. A person without such evidence can be arrested for felony theft and processed. He said he is working on enforcement of these laws by police and the state Department of Agriculture.
Aikane Plantation Coffee grower Phil Becker said his farm was hit last Saturday night with coffee stolen off a drying pad. It was the second weekend in a row. He said an alarm system will soon be installed and he plans to guard the pad himself. He showed those attending the meeting what he believed to be evidence left by a thief - a military duffle bag and a hoodie with the brand name Ecounltd printed across the chest. Becker sent out a call to the community to help identify the owner of the clothing. Inside the bag were coffee bags from his farm. Tipsters can call anonymously to Crimestoppers at 961-8300 or 329-8181. A reward leading to prosecution could total as much as $1,000.
Ka`u Coffee Mill is also upgrading security, as are other small farmers. Brenda Iokepa Moses said she hopes that police officers will ask suspects more questions to narrow down their reasons for being on coffee lands without permission of owners. She said she suspects someone stealing coffee with a getaway car waiting down the road.
Roth asked farmers to give police report numbers and said he would look them up to learn the extent of the investigations.
Roth said that thieves cannot only be charged with the felony theft and given jail time, they can be forced to pay for loss of the crop, and future losses, including long-term losses when the coffee trees are damaged.
He also promised to go to Ka`u’s farmers markets to make sure vendors can prove the sources of the agricultural products they are selling.
Coffee farmers talked about theft of some of their side crops. A stock of bananas is usually more than 25 pounds and a thief could be charged with a felony. Twenty-five pounds of avocado may be only amount to 25 avocados, but stealing them is a felony.
Farmers talked about inviting the police chief, captains and other officers to review the felony law regarding agricultural theft and to make sure the community and police are on the same page when it comes to gathering evidence, writing police reports and sending results of investigations up to the prosecuting attorneys office.


DEVASTATING DAMAGE TO HAWAI`I’S ECONOMY, with massive loss in employment, was predicted by Sen. Mazie Hirono yesterday during a telephone press conference with journalists from around Hawai`i. Reporters and the senator discussed the looming sequestration that would force the federal government to cut $85 billion in spending over the next seven months and $1.2 trillion through 2021. With an economy dependent on military bases, airports, national parks and federal programs in health, housing and education, Hawai`i would be hard hit.
The threat is leading federal managers in Hawai`i to hold back on issuing contracts that provide many jobs and income to help fuel the Hawaiian economy. Hirono said that some $2.3 in defense contracts alone are at risk in Hawai`i.
The senator said that 2,200 health care workers in Hawai`i could lose their jobs. Some 18,000 employees who work for the military in Hawai`i could be furloughed. The FAA could lay off air traffic controllers, damaging Hawai`i’s visitor industry. The number of federal prosecutors, Some 16,000 students in Hawai`i could lose assistance, from after school programs to Head Start, Native Hawaiian education, housing, and special-needs schooling, as well as grants that go directly to Hawai`i’s educational institutions.
“Clearly, this is not the way to go,” she said, calling for Congress to fix the country’s budget with a “balanced approach.” She accused Republicans of “shrugging their shoulders,” and said some of them want sequestration. She urged lawmakers to stop saying simply “cut, cut, cut” and to also focus on opportunities for revenue. Hirono called across-the-board funding cuts a “meat-axe approach.”
With a revenue building approach, she said, Congress could attempt to bring jobs back to this country by lessening company's incentives to outsource overseas and relocate their production and service facilities to other countries. “Let’s close some major tax loopholes to get there.” She pointed to “Big Oil” as one of the industries that should be paying more of its fair share of taxes, saying the federal government is losing “billions.”
For the State of the Union address today at 4 p.m. Hawai`i time, Hirono said she would like to see Pres. Barack Obama “focus on creating jobs.”

PRES. BARACK OBAMA, during his State of the Union speech tonight (broadcast live at 4 p.m. Hawaiian time), will be joined by Master Sergeant (Ret.) Clay Park and Ka`u’s U.S. House of Representatives member Tulsi Gabbard. Park directs Papa Ola Lokahi’s Native Hawaiian Veterans Project. It assists Native Hawaiian vets to reintegrate into civilian life, apply for veterans benefits and gain access to health care services.
Park served three years on active duty, including a tour as an Army combat medic in Vietnam, and later joined Hawai`i Army National Guard, where he served for more than 20 years. While working for a community service organization, he encountered homeless veterans and other newly discharged veterans from Iraq and Afghanistan who needed help. In 2007, Park founded the NHVP and made it his mission to educate, advocate, and link resources to all veterans in Hawai‘i who needed assistance.
“Clay Park is an example of a true hometown servant-leader,” said Gabbard, who served two tours of duty in the Middle East as a member of Hawai`i Army National Guard. “More than ever, now is the time to support people like Clay who have dedicated their lives to helping veterans return to civilian life. He truly understands the unique challenges that face our Native Hawaiian veterans and their families as well as the contributions they provide for our communities.” 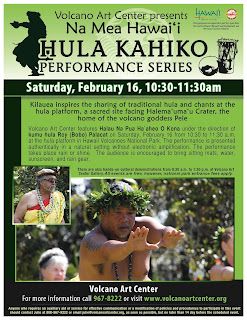 Park described Gabbard as “our voice, not only for our returning warriors, but for all of Hawai`i. No one can walk away from a war unaffected, and that is why it is so important to ease their transition home through peer and community support. I am proud to have Tulsi’s continued support for programs like the Native Hawaiian Veterans Project, as we work to serve Hawai`i’s heroes.”
NHVP works to help veterans navigate the Veterans Health Administration/Veterans Benefits Administration application process, responding to individual issues and concerns, providing presentations on the Project to retired as well as active military personnel, and advocating for veterans at the local, state and national levels.

HULA ARTS AT KILAUEA, in Hawai`i Volcanoes National Park, will be shared this Saturday. Na Mea Hawai`i Hula Kahiko Performance will feature Halau Na Pua Ha`aheo O Kona with kumu hula Roy Palacat. This inspired outdoor presentation takes place rain or shine at the hula platform located near Volcano Art Center Gallery. The audience is encouraged to bring sitting mat and sun/rain gear. On the same day, will be hands-on cultural demonstrations from 9:30 am to 1:30 pm at the Gallery porch.
This program is supported in part by the County of Hawai`i Department of Research and Development and the Hawai`i Tourism Authority. All events are free (donations welcome); park entrance fees apply.

IN SPORTS THIS WEEK, Ka`u High’s boys basketball team plays in the first round of BIIF Division II games Wed. Semi-finals and finals are Friday and Saturday at Hilo Civic Auditorium.
JV softball has three games this week. Ka`u travels to Hilo High today and to Kea`au Saturday. A home game against Pahoa takes place Wednesday at 2 p.m.

HELP TO RAISE MONEY FOR THE EMERGENCY ROOM AT KA`U HOSPITAL by entering the sixth annual golf tournament and outcry auction at Volcano Golf & Country Club this Friday, Feb. 15. Entry fee is $75 for the golf tournament and includes golf cart and lunch. Auction and awards ceremony will be held during lunch. Register with Ron Young at 929-8390 or youngron19582@yahoo.com.
Quilters and the Red Hat Ladies of Ka`u have already raised more than $5,000 through sales of quilts, arts, crafts and food.

IN SPORTS THIS WEEK, Ka`u High’s boys basketball team plays in the first round of BIIF Division II games Wed. Semi-finals and finals are Friday and Saturday at Hilo Civic Auditorium.
JV softball has three games this week. Ka`u travels to Hilo High today and to Kea`au Saturday. A home game against Pahoa takes place Wednesday at 2 p.m.
Posted by The Ka`u Calendar at 11:54 AM Links to this post