WHEN WILL FLOTSAM FROM THE JAPAN TSUNAMI REACH KA`U? When a Japanese fishing ship drifted into Alaska waters, a Japanese kid’s soccer ball landed on an Alaskan island, a Harley washed up on the Canada Coast and trash tumbled onto Washington’s Olympic Coast shores, it seemed like the rubble should have reached Ka`u. 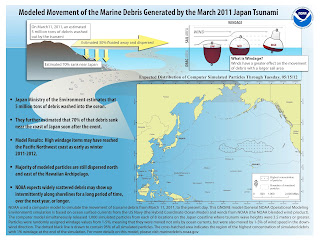 Not necessarily. Megan Lamson, of Hawai`i Wildlife Fund that schedules regular cleanup days on the Ka`u Coast, is looking for debris from Japan but is yet to see any. The giant swirling gyre that rotates in the Pacific between Asia and North America is carrying the debris far north of Hawai`i. However, as debris is caught up in this gyre, called the Great Pacific Garbage Patch, it will travel south past California and head back west toward Hawai`i. Debris that has washed up on other coasts so far is free of radiation.
Last week Congress discussed the need for funding to clean up the debris as it arrives on U.S. shores. On March 11, 2011, a 9.0 quake created the tsunami in Japan as high as 130 feet and sweeping over some 217 square miles, washing millions of tons of debris into the ocean.

MANTA RAYS FROM KA`U TO NORTH KOHALA are protected by state law but in danger of being entangled in fishing lines and caught up in ocean debris, warns the Manta Pacific Research Foundation. 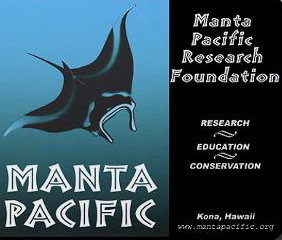 In a story in West Hawai`i Today this morning, Manta Pacific co-founder Keller Laros tells the story of a manta wrapped in fishing line and unable to get away from a tiger shark, even though divers tried to save it. Laros said that 160 manta have been documented from Ka`u to North Kohala. Forty Giant Ocean Manta Rays were also seen here, he told a group of people during Jack’s Diving Locker’s Eighth Annual Ocean Fair last Saturday in Kailua-Kona.
The story by Chelsea Jensen says that the state act protecting mantas was signed into law in 2009. Anyone capturing or killing a manta ray can receive a $500 fine for first offense, $2,000 for second and $10,000 for additional convictions. Laros told West Hawai`i Today that mantas attract divers and snorkelers – an industry worth some $3.6 million a year to the snorkeling and dive shops, boats and guides on the Big Island.

FOUR SCHOLARSHIPS were recently awarded by `O Ka`u Kakou to Ka`u students for the next school year. “All of the entrants added an essay of their goals and expectations in life. They all have also participated in many community service activities,” said Fred Ramsdell, member of the scholarship committee.
Le`a Moses, of Wai`ohinu, will receive a $1,000 per semester scholarship. Moses attends Hawai`i Community College and will transfer to University of Hawai`i at Manoa next year. Moses plans to return to Ka`u after receiving her Bachelor of Arts degree in social work from UH.
Kayla Andrade will be graduating from Kamehameha School in Kea`au this year and will receive a $500 per year scholarship to the University of Hawai`i at Manoa. Andrade will be studying business management.
Layla Abellera, who graduated last weekend from Ka`u High, will receive a $500 scholarship to Hawai`i Community College. Her goal is to become a pediatrician and return to Ka`u.
Miki Moses has been studying at Myron B. Thompson Academy and will graduate this year. She plans on using her $500 scholarship to attend Brigham Young University, Hawai`i and pursue courses in agriculture.
`O Ka`u Kakou offers six scholarships each year, two $1,000 for students in higher education and four $500 for high school graduates. Not all scholarships were awarded due to lack of applicants. “We need more students to fill out applications,” said Ramsdell.

KA`U COFFEE FESTIVAL organizers hold a meeting at 5 p.m. today to discuss the recent event and to begin planning for next year. Everyone interested in helping is invited to attend.

HAWAI`I WILDLIFE FUND sponsors cleanups of anchialine ponds in Ka`u this Wednesday and again next Tuesday, May 29. Volunteers can sign up with Megan Lamson at 769-7629 or meg.hwf@gmail.com.

KA`U `OHANA BAND rehearses every Wednesday and Thursday from 3:30 p.m. to 4:30 p.m. at Ocean View Community Center. The band recently performed at Spring Fling in Na`alehu and the grand opening of Ka`u Coffee Mill in Wood Valley. Call 929-7544 for more information.

KA`U SCHOOL OF THE ARTS is planning a Creativity Day for King Kamehameha Day, Monday, June 11 from 10 a.m. to 2:30 p.m. at Pahala Plantation House. The free event for all ages engages attendees in a wide choice of guided art activities including macramé, stitchery dolls, traditional Pacific Island dances and weaving, clay miniatures, metal intaglio, acrylics on textile and more. Call 929-7544 for more information.

SUPPORT OUR SPONSORS AT WWW.PAHALAPLANTATIONCOTTAGES.COM AND WWW.KAUCOFFEEMILL.COM.
Posted by The Ka`u Calendar at 11:07 AM Links to this post