NEW INFRASTRUCTURE for Ka`u is included in a county bond proposal, approved by the County Council’s Finance Committee yesterday. The improvements would cost $250,000 for a playground at Na`alehu Park, $150,000 for extending the Kahuku Park water line and $94,000 to develop an Ocean View park-and-ride center. Ocean View is a popular bedroom community for people working in Kona.
The Ka`u projects were proposed by Ka`u council member Brenda Ford after she noted that District 6, which includes Ka`u, was the only district without projects in the county administration’s bond proposal. “I think it is only fair that all districts get to participate in improvements,” said Ford.
“Na`alehu’s children’s park – the playground has not had playground equipment for the children for many, many years. It never gets budgeted into the operations budget,” Ka`u’s council member told the Finance Committee.
The Kahuku water main extension would bring water “from the only well in Ocean View to the only park in Ocean view “so that children could have grass to play on instead of rocks and dirt,” Ford said.
She said that the Ocean View Park and Ride was put through the CIP process to purchase land to build a bus shelter and put in a street light for safety reasons. She said county mass transit is already paying $500 a month for the land.
The full County Council takes up approval of the proposal for the county to issue the new bond which would be for $61 million for 23 projects around the island.

THE GMO DEBATE CONTINUES with Merle Inouye weighing in following a recent opinion piece by farmer Richard Ha. Writing in Civil Beat, Inouye, a Big Island natural farmer and food safety advocate, notes that in November, the Hawai`i County Council passed Bill 113 to prohibit open-air cultivation of GMO crops and plants. Tomorrow, Dec. 6, is the deadline for Mayor Billy Kenoi to either sign, veto or let the bill become law without his signature.
On Kaua`i, the mayor vetoed a related bill, but the County Council voted to override the veto.
Inouye suggests taking corn as an example of a GMO crop. She writes that the “American Corn Growers Association, representing over 14,000 corn growers, issued more bad news to its members about the impact GMO corn has had on their industry. ‘Japan and South Korea are buying non-GMO corn from Brazil and China instead of buying U.S. corn.’” She states that the U.S. lowered its corn export forecast by another 50 million bushels. American farmers cannot be expected to pick up the tab for a shortsighted U.S. biotech policy that suggests foreign consumers and importers will ultimately be forced to accept GMOs.”
Inouye predicts that federal farm policies, including support of GMOs, “are throwing away our export markets while driving down corn prices and driving up federal farm program costs. Both policies are major failures. They need ot be changed quickly before their negative impact is reflected in land values and the farm economy is thrown into a major collapse.”
She contended that “Hawawi`i’s GMO papaya has taken the same path of falling production and shrinking returns. Papaya sales for 2011 hit a low of $9 million in 1998, just before the introduction of the GMO papaya.”
Inouye pointed to Richard Ha’s contention that more time is needed to research and think about GMO agriculture.
She also quoted U.S. Secretary of Agriculture Tom Vilsac writing to stakeholders: “The rapid adoption of GE (genetically engineered) crops has clashed with the rapid expansion of demand for organic and other non-GE products. This clash led to litigation and uncertainty. Such litigation will potentially lead to the courts deciding who gets to farm their way and who will be prevented from doing so.”
Inouye poses the questions: “Why are residents in an uproar over GMO planting? Who will compensate the grower for GMO crop contamination? Who will compensate them for the loss of livelihood of non-GMO growers? Who will regulate the GMO contaminators? How will Hawai`i agriculture fare when non-GMO crops cannot be grown alongside GMOs?”
Richard Ha responded to the editorial, saying. “My advocacy of GMO crops arises from asking, ‘What about the rest?’ GMO’s are safe. All the major scientific organizations in the world agree with this. “ He said that if local farmers can’t grow GMO, they will become less competitive, fewer people will go into farming and there will be less food security.
See more at www.civilbeat.com.

NATIVE HAWAIIAN LEGAL CORP, NA PUA NO`EAU educational programs and Alu Like’s social service programs – all for Native Hawaiians - are safe from blood-quantum related legal challenges for now, according to a recent state supreme court ruling. Office of Hawaiian Affairs funding of the services faced a challenge in the state supreme court, but the court ruled in favor of funding specifically for Native Hawaiians. OHA chair Colette Machado called the ruling “a landmark decision. This issue has now been decided in both state and federal court. This is a great day for all Hawaiians.”

CATCHING ULUA, or juvenile ulua – papi`o – that are undersize can bring on a hefty fine from the state, warns the state Department of Land & Natural Resources. The agency issued a press release yesterday reminding fisherman that catching ulua smaller than ten inches is punishable with fines of up to $1,000 and 30 days in jail.  Ulua, when allowed to grow, can reach nearly 200 pounds and can be six feet long, The DLNR made an example of a fisherman on O`ahu taking an undersized ulua. The agency levied a fine of $250.
Randy Awo, chief of the DLNR’s Division of Conservation and Resource Enforcement stated: “Taking undersized ulua presents a threat to Hawai1`i’s near shore fisheries. DOCARE continues to patrol ocean waters and shorelines to ensure compliance with fishing regulations.” The O`ahu offender, was turned in by an anonymous tipster.

KA`U’S CONGRESSWOMAN TULSI GABBARD opposed a bill that passed the U.S. House of representatives that would exempt private equity fund advisers from registering with the federal government. The Republican proposal also drew a no vote from Rep. Colleen Hanabusa, who issued a statement saying, “The ability to manage and monitor risks in all investment areas is crucial to ensuring that another 2008 financial crisis does not happen again, and I could not vote to create a loophole that would exempt almost all private equity firms from oversight, while weakening investor protections.
The measure, to amend the Investment Advisers Act of 1940, passed the House 254-159. According to Hanabusa, however, it is not expected to pass a voted in the U.S .Senate.

SCHOLARSHIPS FOR UNIVERSITY OF HAWAI`I – HILO are available for first-generation students. Requirements for these Dorrance Scholarships Hawai`i are that applicants are seniors in good standing at a Big Island high school, are in the first-generation in their families to attend college; a minimum GPA of 3.0, verification of SAT or ACT test score; and acceptance to U.H.Hilo. Applicants must also show financial need and plan to reside on campus for freshman and sophomore year.

Scholarships are for up to $8,000 annually and are renewable for a four-year college education. Awards will be announced by April 30, 2014. Contact high school counselors or Maria Martin at mmartin@azfoundation.org. 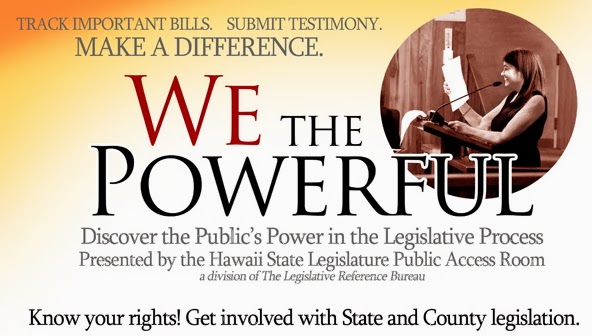 TRAINING TO HELP THE PUBLIC follow the actions of the 2014 State Legislature will take place in Ka`u from 6 p.m. to 8 p.m. next Thursday, Dec. 12 at Pahala Plantation House. The training, sponsored by the state of Hawai`i’s Legislative Reference Bureau’s Public Access Room, is free and open to everyone. The meetings are  “designed to demystify the state lawmaking process, and will demonstrate ways that people can speak out at the Legislature without ever having to leave the Big Island,” says a statement from PAR.
The workshop is entitled, We the Powerful. It is two hours and begins with a session called How the Legislative Process Works (and How to Work It), followed by a session called Delving Deeper – teaching the public how to reach further into the legislature’s website and other resources.
Covered topics will include an overview of the Legislature;s website, understanding the legislative process, delivering effective testimony and making sense of the calendar and deadlines. “Renewed inspiration to be part of the solution will be the overriding theme.”

A CLASS ACTION SUIT BY FOSTER PARENTS could force the state to pay more for childcare in foster homes. The suit, representing more than 1,000 foster parents in Hawai`i, contends that failure of the state to increase support for foster homes since 1990, violates the federal Child Welfare Act. The act directs the states to cover expense of raising children in foster care. The monthly payment to foster families is now $529 a month. The case is being handled by the Hawai`i Appleseed Center for Law and Economic Justice, which claims that foster families should be receiving more than $950 a month per child to care for them in the state with the highest cost of living – Hawai`i.

KA`U TROJAN VARSITY WAHINE BASKETBALL team fell to Kamehameha at Kea`au in the season opener this week. Trojans lost 14 to 61. High scorer for Ka`u was Denisha Navarro with 6 points. Trojans will host Konawaena on Tuesday, Dec. 10 at 6 p.m.

KA`U BOYS AND GIRLS SOCCER played their season opener on Tuesday against the Kamehameha Warriors in Kea`au. Girls lost 0-9, boys also lost 0-5. Ka`u soccer will host its next match on Saturday, Dec. 7 at 11a.m. and 1 p.m.

PAHALA CHRISTMAS PARADE is this coming Sunday, Dec. 8. The 35th annual parade begins at 1 p.m., with Santa handing out candy to keiki and making an appearance at Ka`u Hospital. Community groups, coffee farmers, the fire department and many more join in this holiday celebration. To participate, call Eddie Andrade at 928-0808. 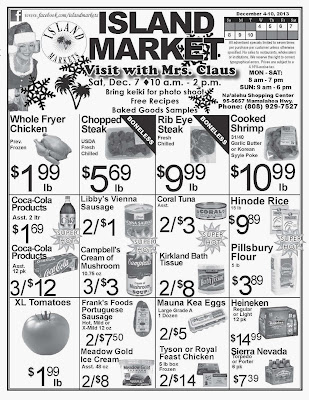 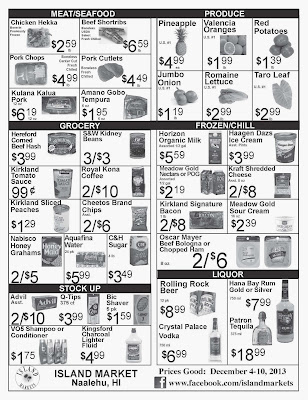 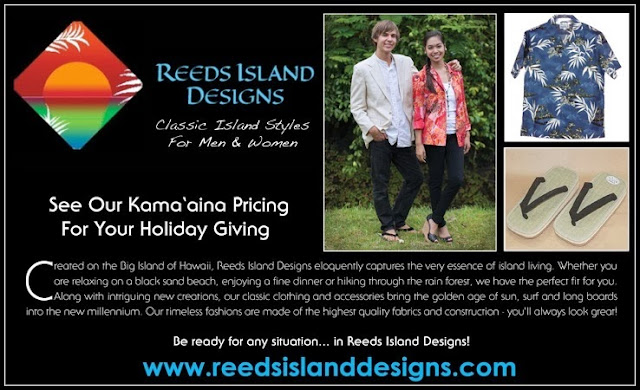 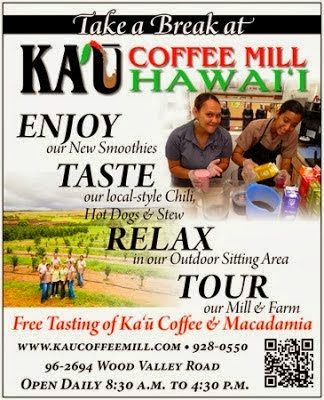 Posted by The Ka`u Calendar at 11:49 AM Links to this post