THE MONSANTO PROTECTION ACT, which was folded last week into the U.S. House of Representatives continuing resolution for funding the federal government, is the subject of a mass email this morning by Ka`u’s congresswoman Tulsi Gabbard. She called the inclusion of the measure to protect Monsanto’s GMO practices “sneaking,” but called it “a setback, but it isn’t a defeat. We still have a chance to stop it. In the coming days, the Senate will vote on this critical fiscal bill with its unwanted tag-along. If they act, they’ll be able to stop big agricultural and biotech corporations from putting untested and potentially unsafe engineered foods on our plates,” stated Gabbard. She also sent a mass email to a petition, writing: “Will you join me and call on the Senate to remove the Monsanto Protection Act? Click here to sign.”
To comment on or “like” this story, go to facebook.com/kaucalendar.

GENETICALLY MODIFIED ORGANISMS were the topic of another long County Council meeting yesterday, with experts on both sides of the issue putting forth their arguments. Ka`u’s County Council member Brenda Ford earlier submitted a bill that would ban all GMO crops on the island, giving farmers 30 months to switch over. She said, however, her bill is dead, leaving Council member Margaret Wille’s bill in play to exempt GMO papayas. Yesterday’s meeting lasted eight hours.
Supporters of GMO papayas from Calavo Growers claimed that Ford has a conflict of interest in voting on the issue since she and her husband farm a quarter-acre of non-GMO papayas in South Kona. According to a story in this morning’s Hawai`i Tribune-Herald, “Ford, who had made note of her papaya trees during a previous Council meeting, disagreed. ‘I don’t see it as a conflict of interest,” she said.
“While acknowledging she has a personal stake in keeping her papaya from being cross-pollinated with modified types, Ford said that wasn’t the only reason for introducing it. ‘Nobody else wants their crops to be contaminated either,’ she said.”
Famed Hawaiian activist Walter Ritte, from Moloka`i, and Kaua`i County Councilman Gary Hooser, who drafted anti-GMO legislation for Kaua`i, claimed that GMO seed farms and their use of chemicals on their islands lead to health problems. Hooser, who was formerly a state senator and formerly the head of the state Office of Environmental Quality Control, told the Hawai`i County Council that GMO “is out of control, quite frankly,” Tom Callis reported in the Hawai`i Tribune-Herald.
The Tribune-Herald also reported on testimony from Dennis Gonsalves, who developed the transgenic papaya after fungus and a virus repeatedly destroyed papaya farms. Gonsalves told the Council that no one was worried about the virus, which infected papaya at a higher level than found in today’s GMO papaya.
Anti-GMO testifier Jeffrey Smith talked via Skype from Arizona. Author of Seeds of Deception and working with the Institute for Responsible Technology, he told the Council that the federal government is failing to limit GMO impacts on food, the Tribune-Herald story reported. He called scientific claims by the GMO industry “tobacco science.”
The topic comes up again at the County Council on Tuesday, Oct. 1.
See more at hawaiitribune-herald.com.
To comment on or “like” this story, go to facebook.com/kaucalendar.

THE STATE OF HAWAI`I PLANS TO PUT FORTH standards and guidelines for seed/diversified agriculture companies to voluntarily comply with certain health and safety requests of the community, according to Gov. Neil Abercrombie. He said the guidelines will include disclosure of aggregated usage of restricted use pesticides and implementation of a setback from schools and hospitals.
“In January, (when the state Legislature reconvenes), we can look into codifying law regarding disclosure and setback requirements in the context of protection of public health and safety,” Abercrombie said. Until then, compliance by farmers to temporary standards will be on a voluntary basis.
The governor also stated that he would work with the Legislature to restore positions within and seek additional funding for the Department of Agriculture and the Department of Health’s Environmental Health Administration, particularly for the neighbor islands, to address pesticide compliance and conduct inspections regarding pesticide contamination, and ensure that inspections are conducted in a timely manner.
To comment on or “like” this story, go to facebook.com/kaucalendar.

PHONE AND SOME INTERNET OUTAGES in Ka`u yesterday were caused by a tree damaging a fiber optic line in a remote place off Hwy 190 in North Kohala, where a crew hiked to make repairs. The problem led to approximately 20 hours of outage for land phone lines, as well as Hawaiian Telcom Internet services. Bank of Hawai`i in Pahala was unable to connect with main computers most of Monday morning. Police officers were stationed at schools in case of emergencies. Stores needing phone lines for credit cards found them unusable. 911 was out of service, leading to people going directly to the police station and emergency room and even to police officers’ homes in Ka`u.
To comment on or “like” this story, go to facebook.com/kaucalendar.

MEXICANS, WHO ARE PROMINENT in the local coffee industry, picking coffee from Kona into Ka`u and taking over some farms abandoned on Kamehameha Schools lands, may receive a new line of help. Juan Manuel Calderon, Mexico’s deputy director general for Counselor Affairs, said his government would like to see a consulate established for the country of Mexico in Hawai`i.
The suggestion comes in tandem with a new report by the Migration Policy Institute and University of Hawa`i, called Newcomers to the Aloha State: Challenges and Prospects for Mexicans in Hawai`i. It estimates 40,000 Mexicans living in Hawai`i. The report finds that Mexicans are “unfairly targeted by local police and federal agents in Hawai`i,” according to a story in Civil Beat yesterday.
The story by Nathan Eagle reports supporters of the consulate saying: The office would help increase the visibility of Mexicans in Hawai`i, improve access to services and foster entrepreneurial ties.”
According to the report, “The state government of Hawai`i needs to recognize that Mexicans form a steadily growing and stable community. To address the community’s sense of marginalization, the state needs to restore the trust that has been negatively impacted by the local-federal cooperation in enforcing immigration law.”
See more at civilbeat.com.
To comment on or “like” this story, go to facebook.com/kaucalendar. 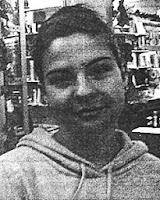 POLICE ARE SEARCHING FOR ROSA FONSECA, a missing 17-year-old girl from Volcano. Fonseca was last seen July 21 in Volcano. She is Caucasian, four-foot-eleven-inches tall, 110 pounds with brown eyes and long, brown hair.
Anyone with information on her whereabouts is asked to call the police non-emergency line at 935-3311. Those who prefer to remain anonymous may call Crime Stoppers at 961-8300.

PARTICIPANTS CAN LEARN LAUHALA WEAVING tomorrow from 10 a.m. to 12 p.m. on the lanai of Kilauea Visitor Center in Hawai`i Volcanoes National Park. Amy Ka`awaloa and Malia Macabio teach the art, from gathering the material to preparation and the final product. Free; park entrance fees apply.

DEVELOPMENT OF A WATER USER AGREEMENT is on the agenda when Ha`ao Springs and Mountain House Ag Water Co-op meets tomorrow at 4 p.m. at Wai`ohinu Park.
For more information, email katywhite@hawaiiantel.net.

PAHALA PUBLIC & SCHOOL LIBRARY presents an overview of available resources Friday at 11 a.m. Participants learn about searching the library’s catalog, checking their library accounts, requesting books and about some of the many other free electronic resources Hawai`i State Public Library System has to offer. Computer basics or prior knowledge of mouse and keyboard use is required. To sign up, call 939-2442 at least 48 hours before class.

KAHUKU JUNIOR RANGER DAY IS SATURDAY from 10 a.m. to 2 p.m., and today is the deadline to register. Keiki of all ages join park rangers for a day of activities to take a closer look at the Kahuku Unit of Hawai`i Volcanoes National Park. Free lunch is provided. Call 985-6019. 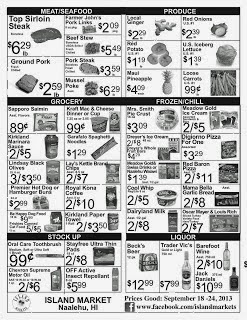 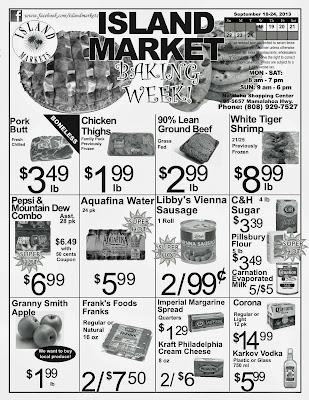 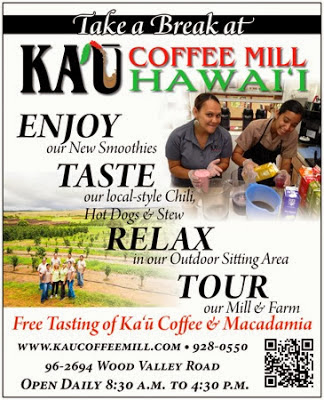