A COUNTY COUNCIL REDISTRICTING MAP would cut Ka`u off from Volcano and put voters who live from the northern Ka`u Desert to Keauhou Resort into one County Council district. The new district could pit current Ka`u County Council member Brittany Smart against Brenda Ford in a re-election contest. Smart lives in Discovery Harbour, and Ford lives in Kona, both within the proposed boundary lines.
Nelson Ho, a staffer for Smart, said the map would not be available for the public or Smart to view until Monday. According to a Stephens Media report this morning, the plan proposes two Hilo districts, two Puna districts, two Kona districts, a Kohala and Hamakua district and the “sprawling Ka`u/South Kona district that wraps around the southern tip of the island from the top of the Ka`u desert to the north border of Keauhou Resort.”
The map was drawn after meetings and public hearings. Few people attended the public hearing recently held in Na`alehu. The two who testified were from Volcano. While one said Volcano should be part of Ka`u, the other said Volcano belongs in the same district as Puna.
According to the Stephens Media story, Ford said she has been working for a decade to make a legal plan, “a plan that’s fair and legal, and this is a pretty good plan. I’ve got to say, this is pretty darn good.”
More redistricting meetings will be held Nov. 3 and Nov. 10 in Hilo, but the commission is reaching the end of its redistricting work which is required every ten years after the federal government conducts the census, which counts who lives where on the island. 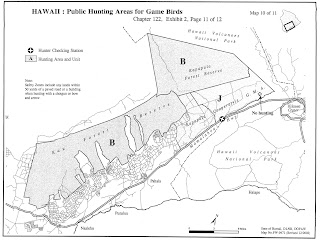 BIRD HUNTING SEASON opens in Ka`u on Saturday, Nov. 5 and goes through Jan. 16, but only on Saturdays, Sundays and legal holidays.
Kapapala Ranch Cooperative GMA and Kapapala Forest Reserve will be open for game bird hunting for the entire game bird season with a check-in station just off Hwy 11 between Pahala and Volcano.
Department of Land and Natural Resources wildlife experts said they expect fewer available game because of the recent and lingering drought.
For the Rules Regulating Game Bird Hunting see hawaii.gov/dlnr/dofaw. They include a valid hunting license, even for private lands; checking in and out of check stations; and obtaining permission when hunting on private land. The state also encourages prevention of wildfires, including refraining from parking in high grass where ignition could start a blaze. More information is available at Division of Forestry and Wildlife offices in Hilo.
A WEALTH OF INFORMATION is available at the online and interactive Hawai`i Flood Hazard Assessment Tool maps. The preliminary flood maps allow viewers to zoom in on their specific plots of land to see any flood dangers from the oceans, gulches, streams and other bodies of water.
The maps show few tsunami risks to homeowners in Ka`u as most dwellings, with the exception of Punalu`u condominiums, are out of the flood zone. The new maps are being checked for accuracy and can be seen at http://gis.hawaiinfip.org/fhat/.
Members of the public have until Jan. 12 to make comments or object to the descriptions of their properties that place them in or out of flood zones.
Comments are being taken by the county Department of Public Works in Hilo.
WITH MORE RUBBISH EXPECTED to wash up on Ka`u beaches with Japan tsunami debris headed this way, Hawai`i Wildlife Fund invites more people to volunteer. Organizer Megan Lamson said “Hawai`i Wildlife Fund is committed in our efforts to remove marine debris from along our majestic shorelines from Kaulana boat ramp to Kamilo Point, whether that debris may be from Japan tsunami in March, local ‘opala, derelict fishing gear from decades past, or other land and ocean-based sources from around the Pacific.”
University of Hawai`i researcher Nicolai A. Maximenko, who has been tracking the debris, wrote recently that the Russian ship “STS Pallada has recently sailed across the tsunami debris field and confirmed the worst predictions of our model. The debris is now only 200 to 250 miles from Midway Islands, and we expect its first landfall this winter.”  In the debris was a Japanese fishing boat from Fukushima, which was washed away during the tsunami.
Over the years, Hawai`i Wildlife Fund has identified debris washing ashore in Ka`u from Japan, Korea, Taiwan, China, Hawai`i, California, Oregon, Washington State, the Soviet Union, Russia, Scotland and others. The next cleanup dates are Saturdays, Nov. 12 and Jan. 14. Call Lamson at 769-7629, see Hawai`i Wildlife Fund on Facebook or email kahakai.cleanups@gmail.com. The organization has been cleaning up the Ka`u coast since 2005.
SEN. GIL KAHELE holds a public forum at Pahala Community Center Wednesday at 5:30 p.m. Kahele said he will listen to concerns of constituents who can help him prepare for the upcoming 27th Hawai`i Legislature which begins in January. He will report on the 26th legislative session and address specific issues. Anyone can call 808-586-6760 or email senkahele@capitol.hawaii.gov ahead of the meeting with issues or questions for the forum.
NONA WILSON, TI CHUN AND WES AWANA perform at After Dark in the Park this Tuesday. Wilson, the assistant hospital administrator and director of Nursing at Ka`u Hospital, met Awana when he was teaching `ukulele at the Kea`au Senior Center and Volcano Art Center. Wilson said she convinced co-worker Ti Chun that it was time to combine their talents. Billed as Friends and Neighbors, the trio played together for the first time at a Ka`u Hospital fundraiser. The concert begins at 7 p.m. at Kilauea Visitor Center Auditorium in Hawai`i Volcanoes National Park. Park entrance fees apply.
SHORT FILMS BY LOCAL YOUTH will be debuted at Hawai`i Volcanoes National Park’s third annual Digital Mountain youth film festival next Saturday, Oct. 29 at 6 p.m. in Kilauea Visitor Center Auditorium. This year’s theme is “It’s My Trail.” The public is encouraged to attend and to vote for their favorite film in advance. The public is also invited to participate in a potluck dinner preceding the festival at 5 p.m.
Awards, including MacBook Pro laptops and Olympus digital cameras, will be presented at the event to winners selected by a weighted combination of judging by a variety of professionals and popular voting. See films and vote on YouTube: www.youtube.com/itsmytrail.
People may vote once each day for their favorite film on YouTube or by emailing itsmytrail@gmail.com.
The Digital Mountain youth film festival is free. For more information, contact Laura Williams at 985-6304 or laura_williams@nps.gov.
Posted by The Ka`u Calendar at 10:12 AM Links to this post