ED CASE, CANDIDATE FOR U.S. SENATE, came through Ka`u yesterday. After stopping at Volcano Farmers Market, he visited Pahala Plantation House, KAHU Radio, restaurants and other small businesses along the way to Kona. Case, as congressman, was instrumental in helping to fund coastal preservation in Ka`u and launched a study for a National Seashore here. He said he supports preserving wild places and natural resources.
“Fundamentally, I believe in our natural resources. So many of them are in the path of development, and I would exert every opportunity to preserve them,” he said. He has been involved in a similar effort on Maui between Paia and Sprecklesville, to create the Patsy Mink Memorial National Seashore.
Another one of Case’s recollections from his time as Ka`u’s congressman is meeting with the people. Case came to Ka`u more often than any other congressman or senator in memory, and had his staff collect the concerns and questions of local people and got back to them. He said he likes to meet the voters. He said it is easy for our representatives in Washington, D.C., once they are in office, to stay away from people and send out press releases as their contact with the people. He said he prefers to come to Ka`u and listen one-on-one so he can see for himself the needs of the community. He said there is also a lot of opportunity for the federal government to help the local economy and with preservation efforts, and that many people do not understand that they can work directly with the federal government.
Case vowed to help redevelop the old plantation water system for agriculture in Ka`u and said he could perhaps help add onto funding through the federal government. He noted that Jimmy Nakatani, the new head of the Hawai`i Agribusiness Development Corp, the quasi-state organization that helps with ag, ran his congressional office in Honolulu when Case was a member of the U.S. House of Representatives.
In his run for U.S. Senate, Case faces current U.S. Representative Mazie Hirono in the Democratic primary and would likely face former Governor Linda Lingle in the general election if he wins the primary. During the last election, he took on veteran Sen. Dan Akaka and lost, but Akaka has decided to retire, leaving the seat open. Case described his race against Hirono as “a rough, tough fight. We have different agendas, approaches and styles,” he said. “This is a crucial election for Hawai`i. Any time you change U.S. senators, it is really important, given all the work U.S. senators can do for a state. What makes this a generational election is that whoever is elected “will probably take the place of the senior senator when Inouye retires.” 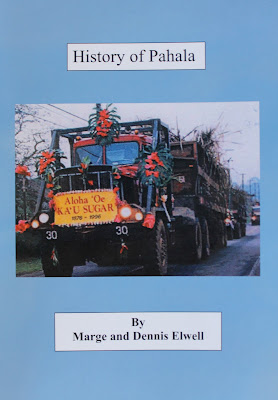 Case said he is proud to be a Democrat, “but I don’t think the future of our country lies in this endless partisan fight to the death. That won’t create solutions for our country. There is a place for partisan debate and decisions, but that is not the be all and end all of government. What is really going to work is finding what works for the broad mainstream of our country,” he said.
Regarding the federal budget problems, he said, “One of the biggest challenges is getting our fiscal house back in order. One extreme is to increase taxes and chase revenue, and the other side is to cut taxes” and chase government cost cuts. He recommended “some of both approaches.”
He said that elected officials “need to be more bridge builders and problem solvers, especially in the Senate.”
THE HISTORY OF PAHALA is now available. Marge and Dennis Elwell compiled the book, which has information about the sugar plantation as well as chapters on Hilea, Kapapala and Wood Valley. It includes many historical photographs. Proceeds support Na`alehu Main Street. To order copies, call 929-7236 or email marge@hawaii.rr.com.
NEW STATE REAPPORTIONMENT MAPS for Hawai`i County will be presented at a public hearing tomorrow at 6 p.m. in County Council chambers in Hilo. The maps show the addition of a fourth state Senate seat for the Big Island and new boundaries for state House of Representative districts. With a boundary west of Punalu`u, Ka`u would have two state representatives.
VIOLET MAY MAKUAKANE and Helene Hayselden demonstrate the art of making a feather kahili on Wednesday from 10 a.m. to 12 p.m. on the lanai of Kilauea Visitor Center in Hawai`i Volcanoes National Park. Park entrance fees apply.
A SPAGHETTI DINNER to benefit Ka`u Hospital takes place this Saturday from 4 p.m. to 7 p.m. at Na`alehu Community Center.