KA`U RURAL HEALTH COMMUNITY ASSOCIATION, INC representatives met with legislators in Washington, D.C. recently. Interns of the organization’s Ka`u Health Academy, Kamrie Koi, a senior at Ka`u High School, and Nysa Kaniho, a senior at Kamehameha School, flew to Washington, D.C. with KRHCAI Executive Director Jesse Marques and Board President Donna Kekoa. The organization’s Grass Roots Update states that the delegation spent “valuable ‘talk story’ time with Senator Brian Schatz and Representative Colleen Hanabusa.” The KRHCAI team traveled to Washington for the 25th Annual Rural Health Policy Institute. The organization is also the recipient of a grant to help residents to sign up for Obamacare.
AIR CONDITIONING FOR SCHOOLS could receive some funding this year, even though a bill to require it has been dropped at the legislature. Air conditioning at Ka`u schools could not only cool classrooms on hot days, it could reduce the effects of SO2 during voggy days. A bill in the state House of Representatives would provide $25 million for air conditioning in public schools.        Another possibility for air-conditioning money for schools lies in the state Department of Education budget, but legislators said they also offered a separate bill so it wouldn’t be overlooked.
Rep. Takashi Ohno, a former school teacher, sponsored the bill in the House, saying, “We need to put students in better environments to learn. After a hearing last night, the House Education Committee approved the measure with a 10-0 vote. Supporting testimony came from teachers, parents and the DOE.
The new Ka`u Gym & Disaster Shelter, with separate funding, will offer activity rooms with filtered air to harbor several hundred people during vog alerts.
To comment on or like this story, go to facebook.com/kaucalendar.

THE STATE’S COMPREHENSIVE ANNUAL FINANCIAL REPORT was recently released, showing economic recovery and Hawai`i’s net worth at $4.8 billion. This is an increase of $307.1 million over last year and drew a press conference at the state Capitol yesterday, in which Gov. Neil Abercrombie noted the administration’s fiscal restraint helped to allow tax money pile up in state coffers to create an $884 million surplus at fiscal year’s end. Abercrombie also noted that the financial statement came out on time. Some late statements in previous years drew criticism from bond investors and credit rating agencies.
A press release from the governor says that the Comprehensive Annual Financial Report for fiscal year ending June 30, 2013 “shows Hawai`1i’s asset growth has outpaced liability growth for the first time in seven years.”
According to the governor, “Our improving trajectory is a reflection of positive trends in our local economy and responsible management of fiscal affairs, which now includes recognized improvements in meeting our obligations for timely reporting.”
The statement also points out that for the first time in more than five years, the state received the award of Achievement of Excellence in Financial Reporting from the Government Finance Officers Association. The state’s annual financial report can be read at http://ags.hawaii.gov/we-content/uploades/2012/09soh-cafr-2013pdf.
To comment on or like this story, go to facebook.com/kaucalendar.

TUTU & ME AND PATCH, Parents Attentive to Children, are partnering to provide free community based trainings. A class called Fostering Resiliency is designed to help early caregivers, educators and parents of young children understand and develop strategies that help children ‘bounce back’ from stress. The first training session is this Friday in Na`alehu in the back pavilion behind Punalu`u Bakery from 12 p.m. to 3 p.m. It is open to the community. As there will be no childcare provided, parents and caregivers are asked to leave their keiki at home.
Interested parties are being asked to call the PATCH office to register in advance, at 322-3500. However, walk-ins are welcome, too. Those who work with young children or are parents or caregivers of young children are eligible for the free community based trainings. The sessions also aim to connect people in Ka`u who are interested in increasing the quality of childcare in Hawai`i.
To comment on or like this story, go to facebook.com/kaucalendar.

A HEARING ON THE RIGHT TO FARM ACT LEGISLATION, proposed by the Hawai`i Farm Bureau and opposed by some  as a sneak attack against GMO and pesticide bills that were recently passed by Hawai`i and Kaua`i Counties, went to public hearing this afternoon with decision-making planned by this evening. The language inserted into Senate Bill 110 and also included in SB 3058 and House Bill 2506, proposes to add onto existing Hawai`i state law, the following wording: "The right of farmers and ranchers to engage in modern farming and ranching practices shall be forever guaranteed in this State. No law, ordinance, or resolution of any unit of local government shall be enacted that abridges the right of farmers and ranchers to employ agricultural technology, modern livestock production, and ranching practices not prohibited by federal or state law, rules, or regulations."

In a press release, East Hawai`i Rep. Richard Onishi, who introduced the House version, stated: "Like many other states, Hawai`i has had to deal with encroaching urbanization and pressure it puts on our farms and agricultural lands. Unlike most states, Hawai`i is an island with very limited space for agricultural endeavors. We’ve seen how hard it’s been to protect our ag lands and to keep them productive in the face of other pressing needs and priorities.
“But if we are interested in sustainability and moving Hawaii toward greater self-reliance, we will have to strike a better balance between our rural and urban needs. This measure is designed to do just that by protecting our local farmers and ranchers. They have a right to farm in the best way they see fit, as long as they follow legal and accepted agricultural practices, whether we’re talking about ranchers, poultry, hog, vegetable, flower and plant farmers."
However, opponents of the bill characterize it as a way to overturn Hawai`i County's recent ban on most GMO farming. Hawai`i Farm Bureau President Chris Manfredi, who supports the bill,  told the Hawai`i Tribune Herald that the bill would render Hawai`i and Kaua`i Counties’ anti-GMO laws “null and void” and that farmers should face a “level playing field.”

Honolulu Civil Beat ran a story yesterday explaining the proposed right to farm language, saying that it  "appears to be an attempt to exert state control over counties like Kaua`i and Hawai`i that have moved to dramatically curb the use of pesticides and GMOs.
"But the bill faced a joint referral to three committees as well as a fourth referral to a single committee - a high hurdle.
"Solution? Take the  and place it into another bill related to ag - in this case Senate Bill 110, a short-form bill held over from last year. And give it a hearing at the last minute."
Civil Beat reports that "the challenge for those who wish to testify against the measure is that the notice of a hearing went out Monday afternoon and the hearing is Tuesday..."
Robert Domingos, of Discovery Harbour, submitted testimony stating: "Please think before your vote. No one should receive carte blanche rights to do whatever they like in their chosen profession. Regulations and limitations are legislated to prevent that which can be avoided. We want a GMO-FREE future. GMO is not natural selection. Hawai`i must stand united against GMO. Vote no on one-ten."
To comment on or like this story, go to facebook.com/kaucalendar.

HAWAI`I WILDLIFE FUND sponsors a Ka`u Coast cleanup at Kamilo this Saturday. Meet at Wa`ohinu Park at 7:45 a.m. Bring sturdy shoes, bag lunch, sun and wind protection, plenty to drink and four-wheel drive vehicles. Those without 4WD can pool with other volunteers. Contact kahakai.cleanups@gmail.com or 769-7629.

A MAJOR ANNUAL FUNDRAISER for Volcano Art Center is this Saturday, Feb. 8 at the Niauluani Campus. Called Love the Arts, it features champagne and wine and a gourmet dinner to honor Volcano Art Center's 40th Year in its Hawaiian Home, Hawaiian Style. There will be a live and silent auction. Tickets are $50 in advance and $60 at the door. It includes a $10 credit toward an auction item Call 967-8222. 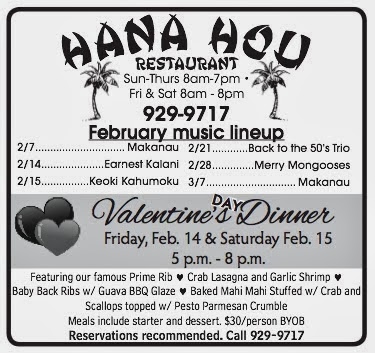 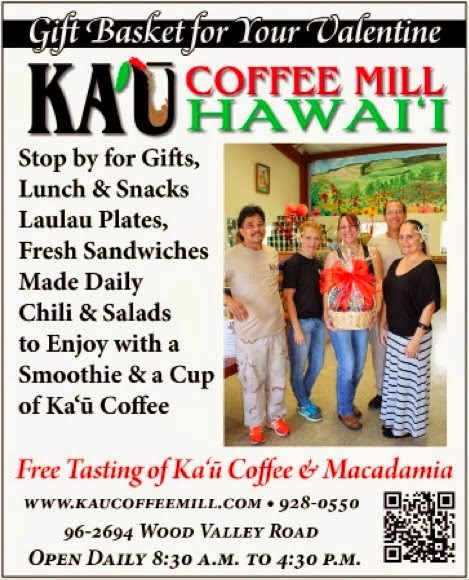 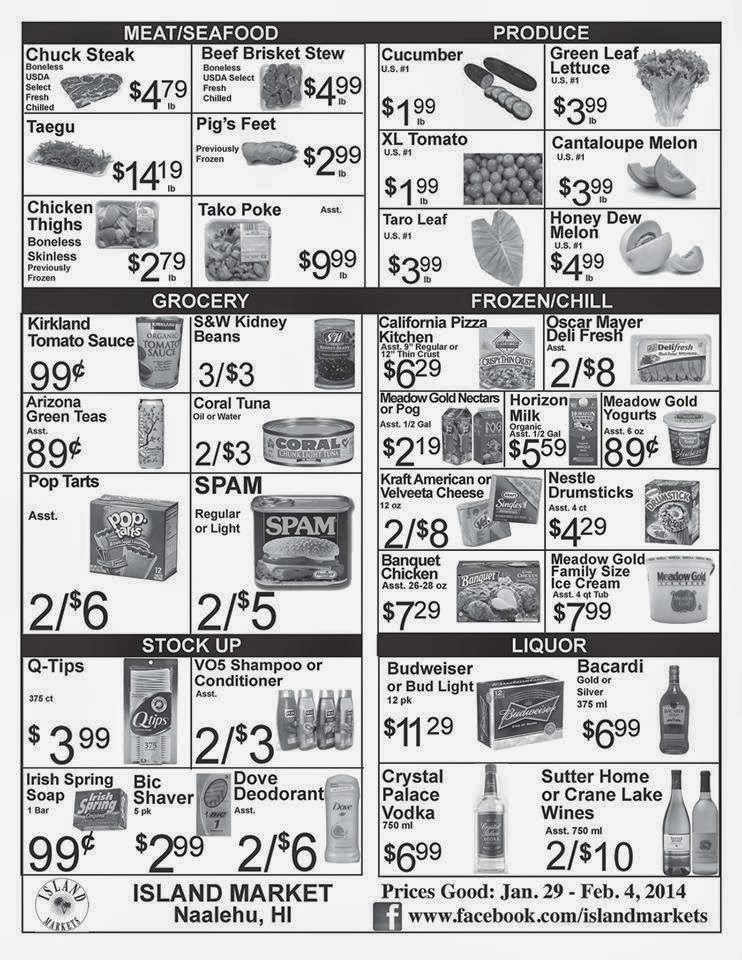 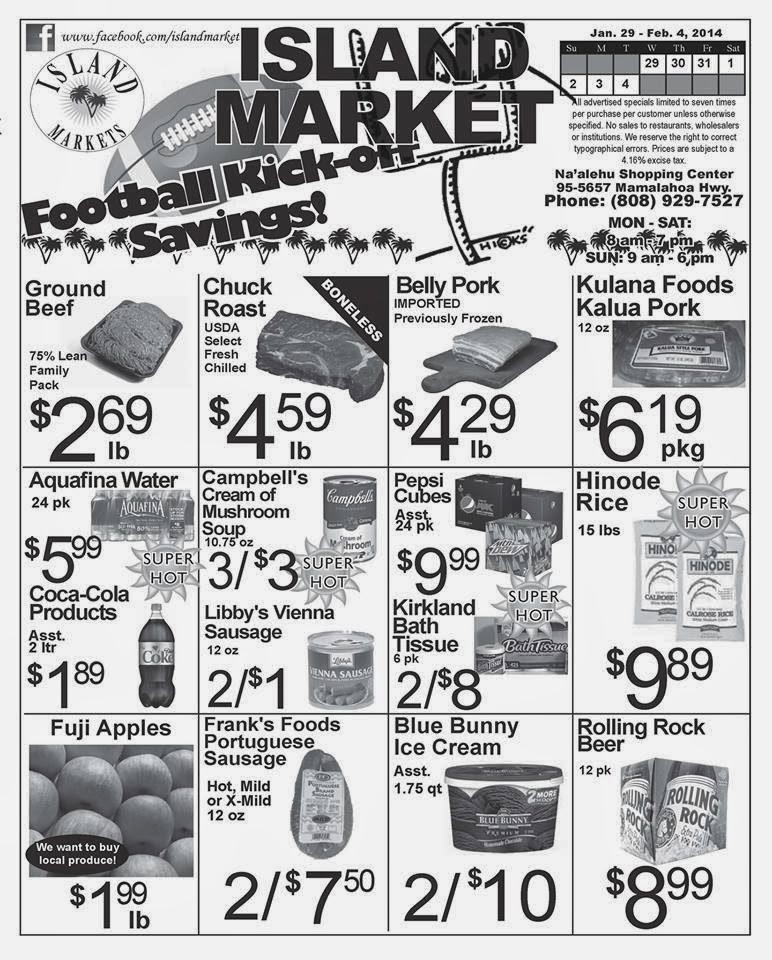 Posted by The Ka`u Calendar at 3:21 PM Links to this post