PA`A PONO MILOLI`I is taking a stand against the proposed Kahuku Village – Nani Kahuku `Aina development in a letter to county Planning director Bobby Jean Leithead-Todd and the Office of Environmental Quality Control, which has taken comments on the Draft Environmental Impact Statement for the proposed oceanfront resort community.
Pa`a Pono Miloli`i president Kaiali`i Kahele states, “It is our desire that the land from Ka Lae to Miloli`i should remain in the current state that it is in today. This area that we speak of is filled with cultural and historical artifacts, is home to hundreds of species of marine, mammal and plant life, and is the primary sustenance, survival and livelihood of the fishing village of Miloli`i and its residents.”
The statement says that Pa`a Pono Miloli`i efforts of the Miloli`i/South Kona community “prevented similar projects such as the Hawaiian Riviera and the Farms of Kapu`a from ever coming to fruition.”
The statement claims that the developers “failed to consult with citizen groups and individuals, including but not limited to Pa`a Pono Miloli`i and the residents of Miloli`i, which would be affected by the proposed action.”
According to Pa`a Pono Miloli`i, “Miloli`i is the last Hawaiian fishing village and community in Hawai`i. Its unique status, both as an ecosystem and as a hub of traditional Hawaiian culture, is found in very few instances in the state of Hawai`i. Due to the geographical location of the proposed development, the draft EIS fails to conduct sufficient analysis as to the community's concerns.”
Concerning wildlife, the statement says, “We feel the terrestrial wildlife, marine, coastal ecologies and water qualities studies are inadequate as to give the public opportunity to review and assess the impacts of the project. Specifically, the draft fails to consider the many endangered and threatened species within the area, including, but not limited to the Hawaiian monk seal, which is not even mentioned in the draft. The federal government has recently proposed designation of the coastal areas of the APE as critical habitat for the monk seal,” the statement says.
The statement calls the developer’s proposed Kahuku Hawaiian Heritage Center “an insult to the County of Hawai`i.” It says that “the applicant places great emphasis upon this organization, but fails to mention in the draft that it is a newly formed nonprofit organization created less than nine months ago, led by the applicant out of an O`ahu office.” There is “currently no listed board of directors, and the organization does not allow for members, so it is unclear how this invites community involvement,” states Pa`a Pono Miloli`i.
The statement concludes by saying, “Once again the community finds itself in a position where we are expending the little resources we already have to show how the applicant failed to comply with the law. The applicant is wealthy and well-resourced. We should not have to do their jobs for them.”

LETTERS OF SUPPORT FOR NANI KAHUKU RESORT have gone to some public officials. Thalia Naidu, of Na`alehu, wrote that “resort development can be done to enhance the enjoyment and appreciation of the coastline and protection of archaeological sites if the right protections and mandates are put in place during the permitting process.”
She said many “critical archaeological sites are being destroyed at South Point simply because the public is allowed to camp and trash, litter, and run ATVs all over the site without any type of facilities and proper protocols in place.” She claims that “few who spout opposition to development, seem to really care about genuinely caring for the `aina, and it is NOT the tourists who are to blame. Similar sites have been preserved, restored, protected and enhanced as educational resources which become available to the whole community as well as visitors at Waikoloa Beach Resort, and Keauhou Beach Hotel, as great examples. It is up to the community to ensure that this is done, without resisting the undeniable benefits a resort will bring,” states Naidu.
Naidu claims that “those who oppose this resort are either retired, on welfare or disability and don’t need the jobs or care about the services and amenities conscious resort development will bring to this deprived and depressed area. I’m sure others are opposed because additional police protection, also badly needed in this area, might be a threat to their criminal activities.... Need I say more?” asks Naidu.
She writes, “The Nani Kahuku `Aina Resort will likely spawn greater concern for these other areas by attracting more tourists who seem to appreciate the natural unspoiled beauty of the area more than the locals do.” Naidu contends that there are few work opportunities here and that the only alternative is to drive 50 or 60 miles every day, and this costs each family nearly $1,000.”

THE KAHUKU VILLAGE DRAFT EIS IS AVAILABLE online to read at the Hawai`i Department of Health’s Office of Environmental Quality Control website. The link is: http://oeqc.doh.hawaii.gov/Shared%20Documents/EA_and_EIS_Online_Library/Hawaii/2010s/2011-09-23-DEIS-Kahuku-Village-Vol1.pdf. The developers are required to answer each question brought up by the public regarding their statements. 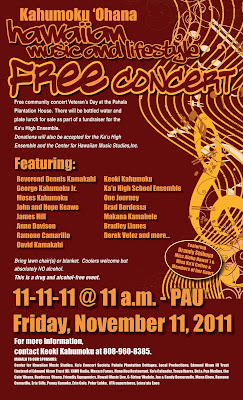 HOPE & JOHN KEAWE are among the performers at the Hawaiian music concert at Pahala Plantation House tomorrow from 11 a.m. to 4 p.m. The concert is part of a weeklong workshop on Hawaiian slack key, `ukulele, steel guitar, hula, choir and composition as part of the Keoki Kahumoku Hawaiian Music and Lifestyle Workshop. Performing tomorrow will be George, Keoki and Moses Kahumoku, Dennis and David Kamakahi, James Hill, One Journey and the Ka`u High School Ensemble. The concert is free, and income from sales of bottled water and food, as well as donations, will go to the Ka`u High Ensemble and the Center for Hawaiian Music Studies.

A VETERANS DAY CELEBRATION begins at 10 a.m. tomorrow in Na`alehu Park. Sponsored by the Ka`u Multicultural Society, the event features the Ka`u `Ohana Band with several marches to set a tone for the event, said band spokesman Robert Domingos. Speakers will include County Council member Brittany Smart. The event will include games for kids, displays of veteran photos and memorabilia. It begins with a blessing at 9 a.m., with entertainment to follow from 10 a.m. to 3 p.m.

KILAUEA MILITARY CAMP will host a Veterans Day ceremony and celebration tomorrow at 3 p.m. Speakers are Lt. Col. Joseph D’Angelo and Circuit Court Judge Edward Kubo. A buffet will be served at 4:30 p.m. at the Crater Rim Café. Fees apply.
A KA`U BEACH CLEANUP is scheduled for this Saturday. Volunteers meet at Wai`ohinu Park to carpool to Kamilo Beach near South Point. Four-wheel-drive vehicle are required. To sign up, contact Megan Lamson at 769-7629 or kahakai.cleanups@gmail.com.