NO PUBLIC UTILITIES COMMISSION HEARING will be held in Pahala regarding the `Aina Koa Pono case, state Rep. Richard Onishi reported this morning. Onishi recently presented a petition to the PUC, signed by local residents, requesting a local hearing since both hearings on this island were held far away - in Hilo and Kona. Onishi said that he was informed that the public input period has passed for the issue of `Aina Koa Pono.
The proposal involves harvesting trees, brush and grasses and building a biofuel refinery off Wood Valley Road. Onishi said he is looking at other ways to foster public input on the issue.
The state Department of Business, Economic Development & Tourism, as well as the County of Hawai`i, the state Consumer Advocate and Life of the Land, have standing in the case, and their input is still being accepted by the PUC. A Jan. 4 deadline requires `Aina Koa Pono and Hawai`i Electric Light Co. to answer questions regarding the proposed electric bill hikes that would support the project, as well as impacts on the agriculture and residential community in Ka`u.
To read more on the issue, see puc.hawaii.gov. Docket number is 2012-0185.

INCREASING HEALTH INSURANCE RATES will pile on more expenses for small businesses, particularly sole proprietors and independent contractors. HMSA has won approval to increase rates for this segment of the insured by an average of 8.8 percent for those whose insurance HMSA contracts will be renewed, starting next Tuesday. HMSA had asked for a 9.8 percent rate increase, but state insurance regulators cut the increase. HMSA points to rising medical costs and increased use of services.

Honolulu Star-Advertiser gave an example of an independent worker who faces a $100 increase per month, after being with HMSA for individual coverage for 15 years. Monthly premiums will rise by $100 next year for Sabrina Hue Sing. “Her monthly rates are rising to $488, not including a $500 deductible she is required to pay before insurance kicks in, she said. ‘The first $500 has to be paid upfront, too — that’s ridiculous,’ said Hue Sing, a substitute teacher for Kamehameha Schools and the state Department of Education. ‘Because I own a condo and I rent it, I’m increasing the rent. I’m socking it to my tenants to pay more money, too, so that’s the way it works. That’s a chain reaction. That’s what people do because they have to pay their medical insurance.’”
The Star-Advertiser story by Kristen Consillio reports that HMSA also seeks an average 1.2 percent increase for employers covering about 78,000 members. The story says that Kaiser Permanente Hawai`i “is asking for a 5.3 percent premium hike for roughly 5,000 businesses with more than 150,000 members.” See more at www.staradvertiser.com.

KA`U’S STATE SENATORS have their committee assignments. Sen. Josh Green, representing west Ka`u, will chair the Senate Health Committee and serve on Human Services and Public Safety and Military Affairs Committees.
Sen. Russell Ruderman, representing east Ka`u, will serve on Education, Energy and Environment, Water and Land and Ways and Means Committees.
East Ka`u Rep. Richard Onishi said this morning that he hopes House committee assignments are set soon so he can get working on them. He said he wants to serve on Finance, Agriculture, Economic Development & Tourism.
West Ka`u Rep. Denny Coffman served as chair of Energy last year and has yet to receive his committee assignments. Onishi also said he is looking forward to working with Joe Souki, who he predicts will become Speaker of the House. Calvin Say is stepping down, and his chosen replacement doesn’t have the votes, said Onishi.

THE HILO SERVICE for Sen. Daniel Inouye featured honor guards, speeches and the viewing of the urn holding his cremated remains, which were flown to the island in a small plane and welcomed with a water cannon salute.
One Ka`u resident, Tokuichi Nakano, a member of the famed 442nd regiment of Japanese-American fighters in World War II, attended the ceremony. Nakano, a Medal of Honor winner, served at the same time as Inouye in Europe. “I think he was a great man and made the whole 442nd so famous, so everyone knows how we fought. He was heroic,” said Nakano.
Mayor Billy Kenoi, who hosted the event, said that Inouye was key to so many federally funded improvements enjoyed by Big Island residents. He pointed to Saddle Road and called it the Daniel K. Inouye Highway, promising to ask for federal and state approval for the name change.
Also speaking were Kahu Daniel Kaniela Akaka, Jr., state Senator Malama Solomon; former state Senator Dwight Takamine, who is director of the state Department of Labor and Industrial Relations; Barry Taniguchi, president and CEO of KTA Super Stores; Monty Richards, chairman of Kahua Ranch; and Ka`iu Kimura, director of `Imiloa Astronomy Center.

Donations can be made to the Daniel K. Inouye Fund at Hawai`i Community Foundation, 827 Fort Street Mall, Honolulu, HI 96813. Contributions may also be made online at HawaiiCommunityFoundation.org. The fund will continue to help organizations and causes that the senator championed over the years.

The last Neighbor Island memorial service was scheduled for today at Maui Arts & Cultural Center.
One Ka`u resident said she traveled to Hilo to see the film Lincoln and was so inspired she was moved to attend the Inouye ceremony at Afook-Chinen Civic Auditorium to honor another great American.
The New York Times reported yesterday that Inouye’s “remains were flown to four islands so people could pay their respects, like Abraham Lincoln’s cross-country journey by train after he was assassinated.” Reporter Jeremy W. Peters wrote that after Inouye’s death, “the state went into a mourning period usually reserved for monarchs and presidents.”
The story also pointed out that when Inouye died, “he was the senior member of the Senate, the second-longest serving member of the Senate, the second-longest serving member in the Senate’s history and the chairman of the powerful Appropriations Committee, the ideal perch for directing billions of dollars back home.”
The story also pointed out that Hawai`i “ranked the highest by far in per-capita federal earmark spending, according to the most recent figures from Taxpayers for Common Sense. The $412 million spent on Hawai`i in 2010, before a moratorium on earmarks went into effect, was equal to almost $320 for each of the state’s 1.3 million people. (North Dakota was second, at about $233 per person.)"
See more at http://www.nytimes.com/2012/12/29/us/politics/death-of-inouye-means-loss-of-power-for-hawaii-in-senate. 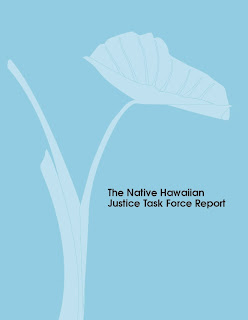 THE NATIVE HAWAIIAN JUSTICE TASK FORCE calls for prisoners held out of state to be returned to Hawai`i. Its recently released report examines the impact of the state’s contracting with non-state facilities on Native Hawaiians. It concludes that, while prisoners in non-state facilities receive more consistent and available programs, live in less crowded conditions and “receive more respect from staff” than prisoners in state prisons, “Native Hawaiians who are sent to non-state facilities are effectively given an unequal burden in relation to non-Ha­waiian prisoners.” This burden includes a dislocation from his or her home, loss of connection to the land, culture, family, job prospects, and community support, the task force says. It also reports that, when released from prison, many offenders incarcerated on the mainland do not have effective transition plans regarding employment, housing, and reintegration into the community beyond compliance with parole.
“The state should make the return of inmates a top priority, and inmates should be returned as soon as practi­cable, consistent with public safety,” the report states. It also calls for legislation prohibit­ing future use of private, for-profit correctional facilities once all inmates have returned to Hawai`i.
The nine-member task force also proposed the following recommendations for the Department of Public Safety:
The entire report is available online at oha.org/mediapublications/criminal-justice-system.

NEW YEAR’S EVE IS THE DEADLINE to vote in Subaru Hawai`i’s Share the Love Facebook contest. With help from Ka`u residents, Hawai`i Wildlife fund could win $5,000 to support its Ka`u Coast Cleanup efforts next year. Log onto facebook.com/SubaruHI and vote for HWF by clicking once on its logo and then another time on the blue VOTE button.
HWF’s first Ka`u Beach Cleanup for 2013 is scheduled for Saturday, Jan. 12. Sign up with Megan Lamson at 769-7629 or kahakai.cleanups@gmail.com.