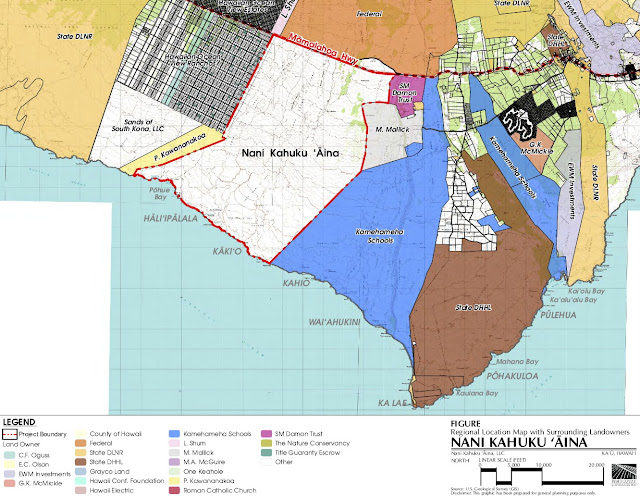 NANI KAHUKU `AINA RESORT’S Draft Environmental Impact Statement for hotels, condominiums, golf course, estates and commercial centers on 16,000 acres between South Point and Ocean View, makai of  Hwy 11 and extending to the Ka`u Coast, has drawn comment from the county planning director.
Bobby Jean Leithead-Todd asks the developers to discuss how the resort would fulfill the county General Plan’s objectives and policies, which include the following: discourage intensive development in areas of high volcanic hazard; encourage urban development within existing zoned areas already served by basic infrastructure, or close to such areas instead of scattered development; and that lands currently designated Resort should be utilized before new resorts are allowed in undeveloped coastal areas.
To proceed at Nani Kahuku `Aina, developers would need land use classification changes, including taking land out of Conservation near the coast.
The planning director wrote that the Draft EIS “lacks sufficient detail to assess impacts” regarding its proposed Hawaiian Heritage Center, its Mauka Community Facilities Reserve, its Mixed-Use Village and related infrastructure and ancillary improvements.
The Planning Department asks the developer to address a number of issues before submitting its Final EIS.
A PROMISE TO OPERATE A NONPROFIT organization for cultural and environmental purposes needs more detail, the county says.
Writes the planning director, “While we appreciate the applicant’s offer to donate a portion of sales and operations revenues to the Kahuku Hawaiian Heritage Center, because the KHHC is so central to the project’s marketability, success, and management of natural and cultural resources, much more detail about building the KHHC’s long-term capacity and viability is needed.”
County planners also ask about a proposed Integrated Natural and Cultural Resources Management Plan, saying it is “referenced multiple times in the Draft EIS as a measure to protect natural and cultural resources and to mitigate impacts of development and public use on coastal and marine resources, ponds, flora and fauna.” The planning director asks for specific protection and mitigation measures to be included in the Final EIS.
PROTECTING THE SHORELINE CONSERVATION ZONE is another subject that needs more explanation from the developer, the planning director says.
She also calls for a more detailed survey of the Ka`u and Hawai`i Island communities to determine the cultural significance of the site, “including sacred associations with open space and the physical landscape as well as contemporary cultural activities at the site, including Native Hawaiian spiritual, cultural and recreational practices.”
The planning director asks for an analysis of impacts on public facilities and services and how they will be mitigated “above and beyond simply donating land.”
She also asks for written documentation from the U.S. Department of Veteran’s Affairs describing the facility that the developers promise will be built for vets.
EVACUATION DURING DISASTERS is another concern of the Planning Department, particularly should there be lava inundation. County planners note that communities in Florida establish population density caps based on evacuation clearance rates in high hazard areas. If development is proposed resulting in density greater than the caps, mitigation is required, either in improving evacuation routes and/or keeping the population below the cap. The planning director asks the developer to define the evacuation clearance rate for the area, propose an appropriate density limit for the proposed Nani Kahuku resort site and identify related mitigation strategies.
She also asks about traffic impacts of the proposed resort, plans to generate power, and analysis of hazards related to the adjacent Pakini bombing range and possible unexploded ordnance.
HAWAIIAN TRAILS need analysis, the planning department says, asking for a legal and ownership analysis, mapping of the existing and proposed trail system, and a timeline for developing a shoreline access plan, parking, and proposed hours the access would be open to the public.
Numerous public comments have been submitted concerning the draft EIS, which can be read on the state Department of Health’s website under the Office of Environmental Quality Control.
THE DEADLINE FOR COMMENTS on the Kawa Drainage Project is Friday, Dec. 23. Comments are being taken on the Environmental Assessment to raise Hwy 11 some ten feet above grade to 46 feet above sea level. An 84-foot-wide culvert, eight feet high, would be placed beneath the highway.
Comments can be sent to the state Department of Transportation’s Hawai`i District Office, 50 Makaala Street, Hilo, HI 96720.
The draft EA is available at Pahala and Na`alehu public libraries, and online at http://hawaii.gov/ health/environmental/oeqc/index.html.

THE KEIKI CHRISTMAS PARTY at Ocean View Community Center begins at 11 a.m. this morning. Everyone is invited to this free event, which includes food, music, gifts for every child under 12 and a visit from Santa.

A CHRISTMAS CRAFT FAIR and swap meet takes place tomorrow from 9 a.m. to 4 p.m. at the Ka`u Castle between mile markers 67 and 68 on Hwy 11.

THE LIGHTED CHRISTMAS TREE on Kamani Street is the site of Christmas in Pahala tomorrow at 5:30 p.m. Donations are being taken for needy families who otherwise might not be able to afford a happy Christmas. Canned foods, turkeys, toys, gift certificates and beverages can be donated by calling Keala Kailiawa at 928-0500 or Pahala Plantation Cottages at 928-9811, or dropping donations by KAHU community radio station on Maile Street.
DESIGN OF THE SHELTER AND GYM at Ka`u High School is the topic of the charrette this Monday and Tuesday from 5 p.m. to 8 p.m. at the school cafeteria. The public is invited to see current plans and offer input for this multi-million dollar project to be built next year.
Posted by The Ka`u Calendar at 9:52 AM Links to this post