THE JAPAN TSUNAMI on this day last year that reached South Kona and Ka`u left evidence that can still be seen, including beaches that were shifted, bones of fish thrown up into palm groves and sands and rocks along the coast. The tsunami washed a boathouse from Honomalino Bay out to sea, leaving one wall to float to Miloli`i. The tsunami severely damaged and lifted houses off their foundations in Kapua and Okoe Bays, reported Sen. Gil Kahele, who hiked along the coast from Miloli`i.
At Punalu`u, volunteers for `O Ka`u Kakou hauled away floating plants sucked from the fishpond onto the beach. The tsunami changed the look of Punalu`u and other shorelines, leaving roots of palm trees exposed. Sand covered pools and rocky areas. Rocks and reefs were exposed at places where they were covered before the tsunami. Fish were found out of water on the rocks and in the sand.
After the tsunami, Rep. Bob Herkes held fundraisers for victims of the tsunami, and all the funding went to those affected on the Big Island. 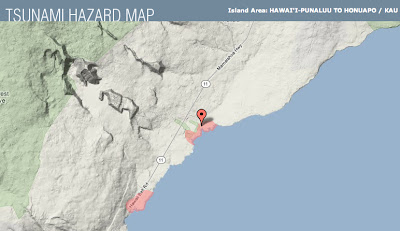 HAWAI`I CIVIL DEFENSE, which has been working on new tsunami inundation maps based on a 9.0-magnitude quake in the Aleutian Islands off Alaska, is considering planning for even a larger quake – one of 9.2-magnitude. The Aleutians generated the most devastating tsunami to hit Hawai`i, with a 7.8-magnitude quake in April of 1946. Kwok Fai Cheung, a University of Hawai`i Sea Grant researcher, said that a major lesson learned from the tsunami one year ago in Japan was that the Japanese were unprepared for such a big event, according to a Jim Borg report in this morning’s Honolulu Star Advertiser.

UNEMPLOYMENT INSURANCE LAW signed by Gov. Neil Abercrombie yesterday not only prevents the rates from rising this year, it maintains a Maximum Weekly Benefit Amount at 75 percent of the Average Weekly Wage, rather than 70 percent, which would have been the payout without the new legislation. He said the law saves employers an additional $550 per year for each employee. Chamber of Commerce Hawai`i Chief Operating Officer Sherry Menor-McNamara said, “The mitigation of burdensome tax increases for Hawai`i’s businesses will directly aid in the revitalization of our state’s economy by spurring the creation of new jobs and promoting increased productivity.”

THE KA`U COFFEE FESTIVAL is holding a meeting every Tuesday at 5 p.m. at Pahala Community Center leading up the festival on May 12 and 13. Members of the public who would like to help the farmers promote their award-winning coffee and thank the community for their support can join in.
HAWAI`I COFFEE ASSOCIATION is accepting entries into its Fourth Annual Cupping Competition to be held July 19 – 21 during its Annual Conference & Coffee Fest Trade Show at Maui Tropical Plantation. The deadline to enter the cupping event has been extended until March 31. The competition compares coffees from different regions of the state, teaches the process of cupping and rating cup qualities and promotes better understanding of cupping qualities of Hawaiian-grown coffee. Each entrant receives a descriptive analysis from professional and certified cuppers to use in describing and promoting their individual coffees.
Farmers can enter three samples per TMK number in Commercial and Creative Divisions. In the Commercial Division, the farmer must have for sale a minimum of 300 pounds of coffee from which the sample is taken. In the Creative Division, less that 300 pounds from which the sample was taken can be available for sale.
To enter a Ka`u Coffee, take three-pound green samples along with the farm’s TMK number to Chris Manfredi at Ka`u Farm & Ranch after calling 929-9550.
Rusty’s Hawaiian 100 Percent Ka`u Coffee took the statewide grand prize at last year’s competition. For the Ka`u District, Lorie Obra took first, and Leo Norberte with his JN Coffee took second, while Trini and Frances Marques took third with their Ali`i Hawaiian Hula Hands Coffee.

WANT TO START A BUSINESS IN KA`U? Hazel Beck, from the Hawai`i Small Business Development Center, discusses what it takes to get a business started at a workshop on Thursday from 9 a.m. to noon at Na`alehu Community Center. To register, contact Jane Horike at 961-8496 or jhorike@co.hawaii.hi.us.
AN EVENING OF GREEN, Hawaiian Style is the theme of a concert at 7 p.m. on St. Patrick’s Day, next Saturday at Kilauea Theater in Hawai`i Volcanoes National Park. Aloha Bluegrass performs, along with Keoki Kahumoku and Brittni Paiva. Aloha Bluegrass, with fiddle, guitar and mandolin players, performed at Ka`u High School last week. Tickets are $22 and available by calling 967-8222. Park entrance fees apply.

VISIT OUR SPONSORS AT WWW.PAHALAPLANTATIONCOTTAGES.COM AND WWW.KAUCOFFEEMILL.COM.
Posted by The Ka`u Calendar at 10:49 AM Links to this post