FISHING COULD BE ALLOWED IN NATIONAL MONUMENT waters off Hawai'i. Secretary of the Interior Ryan Zinke provided a report Wednesday to Pres. Donald Trump, which, according to The Washington Post, calls for the possible overturning of fishing and hunting bans within National Monuments. It also calls for considering reduction in sizes of National Monuments. In April, Trump asked Zinke for a report reviewing the status of 27 National Monuments.
One of them is Hawai'i’s Papahanaumokuakea Marine National Monument, which expanded during the presidency of Barack Obama to become the largest marine preserve in the world, covering 582,578 square miles.
The Washington Post story by Juliet Eilperin and Darry Fears quotes Conservation International Center for Oceans. Its senior Vice President Aulani Wilhelm was Papahanaumokuakea's first superintendent. The Washington Post reports Wilhem saying that the 582,578 square miles of land and sea across the Northwestern Hawaiian Islands are the world’s largest gathering spot for seabirds and home for a myriad of endangered species that have proven largely resilient despite climate change. "There’s a need to have areas in the ocean not only to understand the changes underway but to protect functioning systems as a hedge against those changes," Wilhelm told The Washington Post.
The Washington Post also reports: "The Hawai'i-based long-line fishery has argued that the expansion of Papahanaumokuakea’s boundaries last year impedes its catch. But the industry has already used up 94 percent of this year’s fishing quota, prompting federal officials to temporarily close the fishery as of Sept. 1."
Referring to Obama's establishment and expansion of National Monuments, including Papahanaumokuakea, under the Antiquities Act, Zinke wrote, “No President should use the authority under the Antiquities Act to restrict public access, prevent hunting and fishing, burden private land, or eliminate traditional land uses, unless such action is needed to protect the object.” He said that the recommendations he sent to Trump will provide "a much needed change for the local communities who border and rely on these lands for hunting and fishing, economic development, traditional uses, and recreation.”
According to The New York Times, "Robert D. Rosenbaum, who serves as counsel to the National Parks Conservation Association, said Wednesday that no president has sought to shrink a monument’s boundaries in the past four decades: 'If the president attempts unilaterally to take adverse action on any of the monuments under review, he would be on very shaky legal ground, and we expect the action would be challenged in federal court.'"
See https://www.papahanaumokuakea.gov and visit Papahanaumokuakea Marine National Monument's Mokupapapa Discovery Center in Hilo.

HUNTING  FERAL PIGS ON STATE LAND IN THE KA'U FOREST RESERVE is an issue before the Hawai'i Supreme Court, which is pondering a decision on a suit brought by the Pele Defense Fund.
The Pele Defense Fund, Palikapu Dedman, Terri Napeahi, John Griffiths, Jr. and Tammy Ka'awa sued the state Department of Land & Natural Resources Division of Forestry & Wildlife over the state's Ka'u Forest Reserve Management Plan for 61,641 acres. The plaintiffs contend that an Environmental Impact Statement, rather than and Environmental Assessment was needed to analyze the plan, which includes fencing of areas to protect native species from feral pigs and other ungulates.
The local circuit court sided with the DLNR and issued a summary judgment. However, Pele Defense Fund took the case to the Hawai'i Supreme Court.
According to Big Island Video News, which reviewed tapes of arguments before the Supreme Court earlier this month, the Pele Defense Fund attorney argued against eliminating feral pigs from portions of the forest reserve. "You're eradicating a Native Hawaiian religious symbol. You're eradicating a religious ceremonial object. The eradication of pigs in Ka'u is to eradicate Article 2 Section 7. It's analogous, as a matter of fact, to desecrating Christian sacraments," said Pele Defense Fund attorney.
Hunters testified at several meetings in Ka'u, when the plan was being developed, that they worried they would be restricted from hunting pigs to feed their families. There was also testimony regarding native gathering rights in the forest.
The DLNR has contended that there are plenty of pigs and hunting grounds outside the areas to be fenced to protect endangered species. Pigs, goats, sheep and wild cattle damage the forest and increase the habitat of mosquitoes which carry a malaria that kills native birds.

TALK STORY AT THE KAHUKU UNIT of Hawai'i Volcanoes National Park Friday, August 25, for Coffee Talk from 9:30 a.m. to 11 a.m. and join the informational conversation on the Ala Kahakai Trail with its Superintendent Aric Arakaki.  Ka’u coffee, tea and pastries will be available for purchase. Free entry. 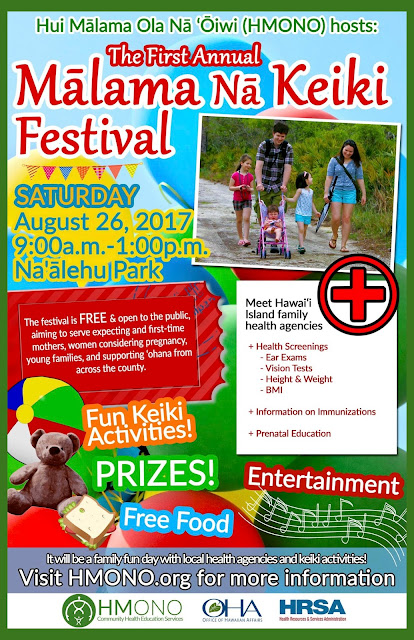 LIVE LONG AND PROSPER MIGHTY ‘OHI’A is the title of an art  show open daily from 9 a.m. to 5 p.m., Saturday, August 26, through October 8, at Volcano Art Center Gallery in Hawai'i Volcanoes National Park with paintings and illustrations by John D. Dawson. The artworks focus on the highly variable display of ‘ohi’a lehua trees found within the park. Gallery viewings are free, though park entrance fees apply.
John D. Dawson has lived in Hilo with his wife Kathleen for the past 22 years and has been commissioned by the United States Postal Service continuously for the past 12 years. The Nature in America series is one of his most well known accomplishments along with a majority of the new art displayed in the Kilauea Visitor Center at Hawai'i Volcanoes National Park. 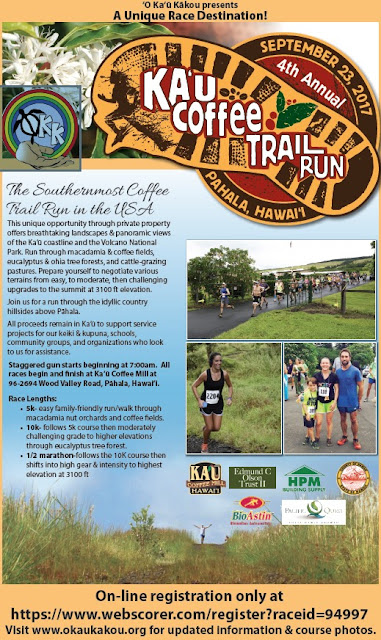 FEARLESS ABSTRACT PAINTING, a class in which Samantha DeSilva will share her unique method of painting, takes place Saturday, August 26, from 10 a.m. to 4 p.m. at the Volcano Art Center. The fee per person is $90 plus a $15 supply fee. Call 967-8222 for more.

NATURE & CULTURE: AN UNSEVERABLE RELATIONSHIP, a free moderate hike approximately two miles takes place Sunday, August 27, from 9:30 a.m. to 11:30 a.m. at Kahuku Unit of Hawai’i Volcanoes National Park. Palm Trail hikers visit a place where catastrophic change (hulihia) and subsequent restoration (kulia) can be observed as the land transitions from the 1868 lava flow with its pioneer plants to deeper soil with more diverse and older flora. Learn about native plants that play a vital role in Hawaiian culture. Visit nps.gov/havo for more.

Posted by The Ka`u Calendar at 7:44 PM Links to this post