EUCALYPTUS TREES ON 3,700 ACRES ABOVE PAHALA on Kamehameha Schools lands leased to an international timber company will likely be harvested, according to plans for the recently approved Hū Honua biomass energy plant in North Hilo at Pepe`ekeo. The Public Utilities Commission has approved the project to produce electricity and sell it to Hawai`i Electric Light Co.
A filing with the PUC says that "Hū Honua’s project involves agricultural activities that fall under the definition in HRS § 269-1, as it involves a commercial agricultural facility or pursuit conducted, in whole or in part, including plant production for nonfood uses, as well as the harvesting and processing of crops (e.g., eucalyptus). Specifically, it depends on the sustainable cultivation, harvesting, and processing of biomass feedstock, including eucalyptus trees in the Pahala and Pinnacle plantations."
Hū Honua's filings with the PUC that also point to Pahala state that "Independent consultant, Mason, Bruce & Girard, performed a due diligence review of the plantation forestry operations and reviewed several relevant resources and information, including the Road Easement documentation for the Pinnacle and Pahala properties, Hawai`i County Grading Permit and Grubbing permit terms and conditions, and Exemption from the U.S. Army Corps of Engineers for the construction of two engineered stream crossings at the Pinnacle property," on the Hamakua Coast.
Another filing states that an "Ashford & Wriston law firm letter dated October 10, 2016, did not find any permitting requirements that would prohibit Hū Honua to continue forestry operations on the Pinnacle and Pahala properties."

The 2017 annual report  Cambium Global Timberland, Ltd., released July 27, stated that the company, which is traded on the London Stock Exchange, plans to dispose of itS 3,700 acres of eucalyptus in Pahala and another 4,500  acres of eucalyptus at its Pinnacle plantation north of Hilo for more than $3 million. 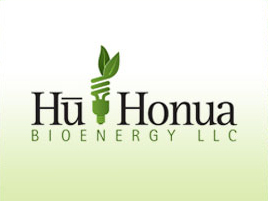 The report sates that the "biomass energy company that is contracted to buy the plantations  (Hū Honua) has settled its dispute with the electricity utility and has made a US $156,000 non-refundable payment of Cambium in return for which the purchase has until 31 July 2017 to close the transaction."
The report says that "Given the limited profitability of harvesting and exporting wood from Hawai`i, local buyers have been the only realistic option for liquidity."

The annual report also advises stockholders of problems with its Brazil forestry projects, including squatters camps that are to be evicted, economic and political turmoil and the costs of firefighting, insurance and security. Both the Hawai`i and Brazil plantations are classified as "discontinued operations."
Hū  Honua, on its website, presents its "Guiding Principles, the driving factors that keep us focused on bringing our biomass power plant online:
"Ratepayers come first. Hū Honua is committed to producing electricity at a cost to HELCO that is less than fossil fuel sources so consumers can benefit.
"Jobs, jobs, jobs. Hū Honua will increase employment opportunities for the people of Hawaiʻi Island in construction, plant management and maintenance, and ancillary services such as forestry.
100% clean, renewable energy. Through a public-private partnership, Hū Honua will deliver clean renewable power to help Hawaiʻi meet its goal of 100% renewable electricity energy by 2045.
"Stimulate the forest industry. Hū Honua will maximize economic impact by revitalizing the forestry industry, including harvesting, hauling, processing, and replanting trees.

Be a good neighbor. Hū Honua is making a long-term commitment to our neighbors by minimizing impacts related to operations and by repositioning an historic facility to serve the future."
See huhonua.com.

WHAT WAS HAPPENING AT KILAUEA VOLCANO TEN YEARS AGO? That is the question being answered by scientists at the USGS Hawai`i Volcanoes Obeservatory in this week's Volcano Watch:
Kīlauea has now passed the one-year anniversary of the episode 61g lava flow reaching the Pacific Ocean. But what was this busy volcano up to a decade ago? Were things as dynamic then as they are now? Absolutely!
Slightly more than ten years ago—on July 21, 2007—episode 58 of the ongoing East Rift Zone eruption got underway with a dramatic collapse of the Pu'u 'Ō'ō crater floor. At the same time, new fissures opened high on the northeastern flank of Pu'u 'Ō'ō. These fissures unzipped the ground and erupted lava to the northeast as far as the 1986-1992 Kupaianaha lava shield, about 3 km (2 mi) downrift.
Activity soon became localized at the northeastern end of the new fissures. This vent, called Fissure D, produced a series of short-lived 'a'ā flows. By late August, the open lava channel feeding the 'a'ā flows began to overflow its banks. The overflows raised the enclosing levees to form a "perched" lava channel that eventually stood about 45 m (150 ft) above the pre-existing ground.

This feature was somewhat unusual in that it represented a cross between an elongate lava channel and a lava lake. Perched lava ponds or lakes are formed by a similar process, with periodic overflows raising the levees and elevating the pool of molten lava above its surroundings. This process has been observed only once with Kīlauea Volcano's current lava lake at Halemaʻumaʻu, but the phenomenon was common at summit lava lakes in the late 1800s and early 1900s.
The episode 58 perched lava channel provided some interesting observations of "seeps," as they were called by USGS Hawaiian Volcano Observatory (HVO) geologists. The seeps, extrusions of sticky lava through the enclosing levees of the perched channel, produced short toothpaste-like flows adjacent to the channel.
Another early phase of episode 58 produced "rootless shields" south of Pu'u 'Ō'ō. These broad, gently sloped accumulations (shields) of lava are called "rootless" because they are not situated over primary eruptive vents. Some of the rootless shields collapsed over time, providing new insights into the formation and destruction of these structures. Similar structures and related lava flows have also been reported in Iceland and recognized in satellite images of Mars.
Lava from episode 58 eventually formed a stable tube system that extended to the southeast and reached the ocean on March 5, 2008. This ocean entry was called Waikupanaha, which was about 3.9 km (2.4 mi) east of today's Kamokuna ocean entry.
Episode 58 endured until March 5, 2011. It was significant in several ways, primarily for increasing our understanding of Kīlauea and its volcanic processes.
It was also the first East Rift Zone eruption episode to occur simultaneously with an eruption at the summit of Kīlauea—the Overlook vent and lava lake within Halemaʻumaʻu, which opened in March 2008. Such synchronous eruptive vents separated by 20 km (12 mi) continue today. The two ongoing eruptions offer tremendous opportunities to study the hydraulics of the magma plumbing and transport system between the summit and east rift of Kīlauea.
Episode 58 ended when the shallow conduit carrying lava from the main reservoir beneath Pu'u 'Ō'ō to the Fissure D vent became plugged. This caused a back-up between Pu'u 'Ō'ō and the summit magma reservoir, providing another data point in how the two parts of Kīlauea Volcano's plumbing system influence each other.
Time-lapse images obtained by remote HVO cameras prior to and during episode 58 were compiled in a series of movies to illustrate Kīlauea in action. These short Quicktime files can be freely downloaded from the U.S. Geological Survey at https://pubs.usgs.gov/ds/621/ds621.pdf.
As the episode 61g lava flow enters its second year, HVO continues to track and study the dynamic processes of Kīlauea, one of the world's most active volcanoes. Only time will tell what the next decade will bring.

GMO LABELING RULES are being finalized at the U.S. Department of Agriculture and Rep. Tulsi Gabbard and fellow lawmakers have called on Secretary of Agriculture Sonny Purdue to ensure labeling standards are consumer-friendly, fair, and transparent.
A statement from Gabbard says that in July 2016 "Congress passed weak GMO labeling standards into law that create a confusing web of disclosure options, allowing companies to choose between on-package text, a USDA-regulated symbol, or an electronic or digital link (e.g., QR code)." While

Gabbard has supported transparent right-to-know labeling requirements, "she strongly opposed the legislation signed into law because it undermines Hawai’i and other states’ ability to mandate GMO labeling, exempts many common foods from labeling requirements, and creates unnecessary extra steps for consumers to access basic ingredient information. The legislation also raised concerns by the FDA, as well as various environmental, food security, and consumer interest groups," the statement says.
Wrote Gabbard, “Nine out of ten Americans consistently report they want the right to know if their food is produced with genetic engineering, the same right held by consumers in 64 other countries. As the USDA works to establish a mandatory, national disclosure standard for GMO foods, we write to express our strong belief that USDA needs to meet consumer expectations, be consistent
with international standards and be inclusive of all Americans – including consumers without smartphones, rural residents and the elderly. We expect USDA’s mandatory GMO disclosure standard to apply to all GMO foods, including foods which contain ingredients like highly refined sugars and oils, as well as foods produced with new
genetic engineering techniques.”