A 45-DAY COMMENT PERIOD is clicking away regarding the Draft Environmental Impact Statement issued for 16,457 acres at the Nani Kahuku `Aina development makai of Hwy 11 between South Point and Ocean View. The state Office of Environmental Quality Control published the EIS on its website yesterday. See Environmental Notice at hawaii.gov/health/environmental/oeqc/index.html. 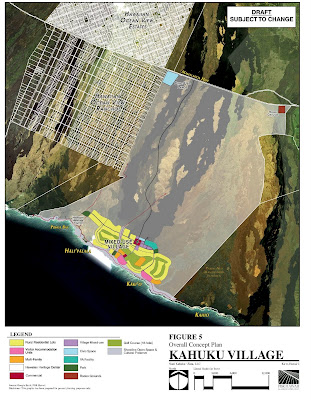 To build its golf course, hotels, condominiums, commercial centers and resort homes, the developers would need a change in land use classification from the state Land Use Commission as well as zoning changes from the county. The resort and residential area would take up about 1,600 acres in the makai section of the property.
Much of the resort development along the coast would be on what is now Conservation land and includes the Pohue Bay endangered turtle nesting area, which the developers promise to preserve.
The developers first introduced a much larger resort with an airport but reduced the size and eliminated the airport. They also promise Hawaiian cultural educational centers and a veterans’ center.

A THIRD BRUSHFIRE in a week tore through grassland near Punalu`u yesterday. Witnesses spotted a small fire on the makai side of Highway 11 on the turn-in road to Punalu`u. One witness who called 911 was told that fire emergency services were aware of the fire, but were busy containing a larger fire on mauka side of Highway 11 that burned 10 acres the day before. Hawai`i and Pahala firefighters arrived within 20 minutes of the call and began containing the fire. A much larger fire burned 85 acres near Punalu`u last week.

PHYSICIST AND ENERGY ANALYST Ulrich Bonne, who lives on the Big Island, is asking the Public Utilities Commission, `Aina Koa Pono and Hawaiian Electric to work together on further analyzing the best options for alternative energies to help get Hawai`i off fossil fuel. Bonne said he and his colleagues would like to help the parties “explore, qualify and quantify available options.” Bonne testified at a public hearing last week in Kona regarding the `Aina Koa Pono and Hawaiian Electric contract that would lead to higher rates for customers on O`ahu and the Big Island to support construction of a refinery and biofuel farm here.
Bonne said that “Hawai`i island is blessed with sustainable and renewable energy resources: Biomass, wind, solar-PV and geothermal.” Regarding growing crops to harvest and transport to a refinery to make liquid fuel, which would again be transported from Pahala to Kona to burn in a power plant, Bonne said this way of making electricity could use up a lot of energy. The scientist said he suspects that “engaging in a substantial effort and energy loss of 30-60 percent to make fuel to then convert it to electricity with another 60-70 percent loss is a losing proposition when direct and much more efficient ‘biomass-to electricity’ or ‘geothermal-to-electricity’ conversions are available for stationary power plants.”
Bonne also testified that bio- and geo-fuels should only be used as road, air and marine transportation fuels, where direct conversion of biomass to engine power is much less available or practical. He said that for transportation fuels, “extra wind and geo electricity, presently curtailed and not needed by the grid,” could be used to make C02 from air and H2 from water to create synthetic fuels such as gasoline, aviation fuel, diesel and ammonia.
He also asked AKP to disclose the nature of the emissions for which they have applied for an EPA permit for 250 tons/year (760 ppm of biomass weight). He asked whether the permit is 250 tons for each pollutant or for total noxious emissions.

A SUPPORTER OF THE REFINERY and biofuels farm is William Kucharski, director of Renewable Energy Pacific for AECOM, the firm selected by `Aina Koa Pono to engineer its refinery here.
In his testimony to the PUC, he defended the proposed use of the giant microwave reactors planned for the refinery. Kucharski said microwaves have been in industrial use for 50 years, and the heat used to make products in other industrial applications is the same heat produced by microwave depolymerization that would turn trees, brush and crops into biofuel. He also said that AECOM visited TekGar microwave facilities in North Carolina and discovered no leakages.
The second point he covered was safety of storage tanks for 1.25 million gallons of fuel that `Aina Koa Pono would keep on hand just off Wood Valley Road along Meyer Camp Road. “The tank foundations,” he says, “will be designed in accordance with U.S. standards for design of diesel storage facilities both in the field of engineering and the insurance industry.” Kucharski addressed the threat of earthquakes to the tanks by citing a 2006 study of the Journal of Loss Prevention in the Process Industries that states that between 1960 and 2003 worldwide there seven natural disaster-related storage tank failures. Of these seven, three were in the U.S. and were not due to earthquakes but due to hurricanes.
The site selected for the refinery is near the Wood Valley epicenter of one of the top ten most severe earthquakes in U.S. history, other testifiers pointed out.
Kucharski addressed the greenhouse gas impact of the refinery by citing an analysis by AECOM and Eichleay Engineers. He said the model “was developed by the U.S. Department of Energy called the GREET Model” which “indicated a reduction in greenhouse gasses in comparison to a fossil fueled plant by a factor of 12 times.” He also noted that the closed loop nature of the plant allowed it to produce “very little emissions.”
In his last point, Kucharski said that AECOM tested the viability of the microwave depolymerization technology for six months and determined that “the technology is viable, mechanically sound, will meet or exceed OSHA standards for microwave personnel protection and will at a minimum produce the output projected.” He finished his testimony by stating that AECOM and TekGar will issue a performance guarantee for the project and its stakeholders.

DEAN NAGASAKO, of Pahala, testified at the Hilo hearing, saying, “a`ole to the biochemical plant proposed for Pahala. First of all, it's too close to Pahala. Secondly, the individual electric customers are having to flip the bill. Simply said, this is a project where it is no can do,” testified Nagasako.

LEE MCINTOSH, of Discovery Harbour, wrote testimony in opposition, saying: “I oppose any ventures that will increase our electric rates. We are already paying four times the national average, which is unacceptable. The purpose of the PUC is to find a balance in protecting rate payers and the utility companies, not giving the electric utilities a free pass to do as they please.”
Said McIntosh, “The success of this venture is based solely on the flawed assumption that the price of oil will continue to rise, eventually making alternative energy projects such as this viable. If that prediction fails, then rate payers are stuck with the cost of funding an unnecessary and expensive venture.”

REGISTRATION is being taken all this week for a major fundraiser for the Boys & Girls Club of the Big Island. The Fifth Annual Tee-Off for Kids Tournament will be held this Saturday, Aug. 13th at Volcano Golf Course. Registration begins at 7:30 a.m. with a shotgun start at 8:30 a.m. Donations are $150 for one player and $300 for a team of two. Send donations and registration forms to Bill Walter, BGCBI c/o W. H. Shipman, LTD, 16-523 Kea`au-Pahoa Road, Kea`au, HI 96749 or fax form to 961-3558. If you have any questions call Mona Eskaran at 935-7015.
GOV. NEIL ABERCROMBIE, Superintendent Kathryn Matayoshi and Education Board Chairman Don Horner have rejected the Hawai`i State Teacher’s Association’s request for arbitration. A joint statement yesterday regarding the pay and benefit cuts the state imposed on the union last month discouraged the union’s supposed “negotiations via the media”, referring to the union’s interpretation of a recent YouTube video of the governor telling the union’s Big Island president Wayne Joseph that the governor was ready to mediate with assistance from a third party. Earlier, the union filed a prohibited practice complaint to the Hawai`i Labor Relations Board after the administration imposed the pay cuts, claiming the state violated collective bargaining rights.
MICHELLE WALL-O’CONNOR shares the art of Lomilomi on the lanai of Kilauea Visitor Center in Hawai`i Volcanoes National Park tomorrow from 10 a.m. to noon.
Posted by The Ka`u Calendar at 11:00 AM