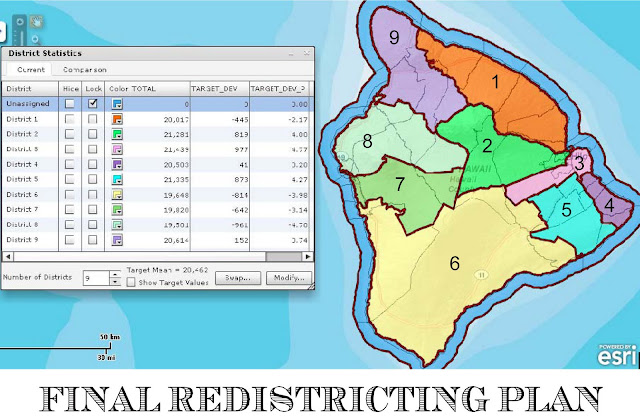 COUNTY COUNCIL DISTRICTS were finalized last night by the Redistricting Commission, pitting Council members Brittany Smart and Brenda Ford against one another should they both decide to run and keep their current residences. Only Lee McIntosh, of Discovery Harbour, has announced running for County Council next year in District 6.

The final plan removes Kurtistown and Mountain View from District 6 and adds Napo`opo`o, Captain Cook and Kealakekua. Kahaualea Road in Volcano is the northeastern boundary, and the border between Kealakekua and Honalo, on the mauka side of Hwy 11, is the northwestern boundary.

The primary election comes early, on Aug. 11, 2012. Candidates can file between Feb. 1 and June 5. Smart is expected to decide soon whether she will run and said she would wait until the final maps were drawn.
Open council seats will be available all around the island, including in North Kona, where Angel Pilago has said he won’t run again for Council and also not for mayor, and in Kohala, where Pete Hoffmann can’t run because of term limits. In Hilo, Dennis Onishi is finishing his last term, and South Kona is available since Ford has been pushed into District 6 with Smart. Puna also has a district opening up with the redrawing of the voting district maps.

GENERAL OBLIGATIONS BONDS totaling $1.28 billion have been sold by the State of Hawai`i, replenishing the state’s rainy day and hurricane emergency funds and refinancing its debt at a lower interest rate.
This restructures debt and creates “a solid financial foundation,” Gov. Neil Abercrombie said last night. “What this means to you, the taxpayer,” said the governor, “is that we are lowering the amount of debt that the state has in the future. Gone are the days where we kick the fiscal can down the road. We are picking it up and facing our financial obligations to make our economy better and ensure economic stability and growth. We are lowering the state’s deficit,” proclaimed Abercrombie.
He said the state can be confident in moving forward on projects that were on hold because the economy was not looked upon as a favorable place to invest. He said decisions to help correct the debt situation “have attracted major investors, and the resounding success of our recent historic bond sale is the result.”
Moody’s Investors Service, Standard & Poor’s Ratings Service and Fitch Ratings have affirmed the state’s credit ratings of Double A/two, Double A and Double A. Standard & Poor’s cited the governor’s “willingness to implement aggressive solutions, totaling $1.32 billion, to balance the fiscal 2011-2013 biennial budget in light of a projected budget shortfall that had reached $1.25 billion for the biennium.”
Moody’s called the recent actions “historical fiscal conservatism,” noting that all of Hawai`i’s General Obligation debt is issued at a fixed rate, and repayment is relatively rapid with 95 percent of principal repaid in 15 years. Fitch concluded that the State’s “financial management is sound.”
The governor said he “made the commitment to invest in education and rebuild our economy, sustain our Hawai`i for future generations and restore public confidence. We are sticking to our game plan, and it is working.”
ALEXANDER & BALDWIN, the sugar plantation owner and one of the Big Five firms which became the oligarchs during Hawai`i’s territorial years, is breaking up. Its shipping firm, Matson Navigation, will become a separate corporation, operating under its own name and moving its headquarters back to Honolulu from California. Alexander & Baldwin will continue operating agricultural and land development business, much of it on Maui and Kaua`i.
Other Big Five companies are either sold off or dissolved. They were American Factors, C. Brewer, Theo H. Davies, and Castle & Cooke.
Over the years, these once all-powerful sugar companies owned much of the land across the islands to grow pineapple and sugar, before they diversified.
Amfac diversified into Liberty House department stores, which was absorbed by Macy’s. Amfac sold land across the state, went bankrupt and reorganized as Kaanapali Land Co., with more than 5,000 acres on Maui.
C. Brewer diversified by starting Mauna Loa Macadamia, Superior Coffee, a guava plantation on Kaua`i, building the resort at Punalu`u and opening a Brewer chemical company. Mauna Loa Macadamia is now owned by Hershey’s, and Brewer’s land is sold off. Its stockholders voted to liquidate more than a decade ago.
Theo H. Davies had a long history of owning sugar companies here and abroad, diversified into Taco Bell and Pizza Hut franchises in Hawai`i and owned the Jaguar and Mercedes Benz auto franchises. It was sold to Jardine-Matheson in Hong Kong, which sold off its assets. Theo Davies remains active only in the Philippines.
Castle & Cooke and its Dole pineapple company and lands were purchased by David Murdoch and his Flexi-Van Corporation. It owns Dole Cannery, Dole Plantation, as well as large tracts of land on O`ahu, and almost all of Lana`i, where it built two resorts and subdivisions. 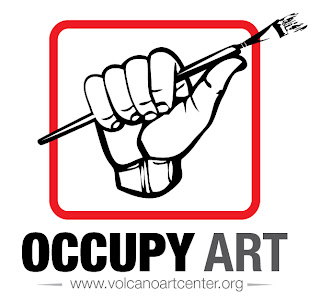 A RECEPTION AND OPEN MIC NIGHT opens Volcano Art Center’s exhibit called Occupy Art tonight at 7 p.m. at Volcano Art Center’s Niaulani Campus in Volcano Village. Acts up to five minutes long can sign up on a first-come, first-served basis. It is billed as a Zero Currency Trade Event, with no admission or entry fee. Bring pupus, snacks and drinks or items to share or trade. The exhibit, which provides a venue for creative and peaceful responses to the Occupy Wall Street movement, continues through next Friday.
CONCERTS THROUGHOUT KA`U offer holiday music this weekend. Free concerts featuring the Ka`u Community Chorus, the Ka`u `Ohana Band and Hannah’s Makana `Ohana take place at 2:30 p.m. on Saturday at Ocean View Community Center and Sunday at Discovery Harbour Community Hall.
The Volcano Festival Chorus Concert is set for Saturday at 7 p.m. at Kilauea Military Camp Chapel in Hawai`i Volcanoes National Park. This free concert is a gift to the community from Kilauea Drama and Entertainment Network and the chorus. Park entrance fees may apply.

MANAGING NON-NATIVE UNGULATES including pigs, goats, sheep and cattle is the topic of public meetings sponsored by Hawai`i Volcanoes National Park next week. The park seeks comments on its draft plan and EIS to protect and restore native ecosystems. The meetings are from 6 p.m. to 8 p.m. on Monday at Kilauea Visitor Center and Tuesday at Na`alehu Community Center.
Posted by The Ka`u Calendar at 9:45 AM Links to this post