LEHMAN BROTHERS HOLDINGS USED ITS CREDIT to become top bidder on more than 5,800 acres of Ka`u coffee, cattle and coastal conservation lands yesterday during a foreclosure auction at a Honolulu courthouse. The only outside bidder was Edmund C. Olson, who said he wanted to protect the Ka`u Coffee lands which make up less than 400 acres of the total. Each time Olson bid, a Lehman representative bid more until Olson dropped out at $12 million.
Observing the bidding from Ka`u were Chris Manfredi, who has managed the land and helped promote Ka`u Coffee to international fame, and Malian Lahey, who said she hopes to help the farmers keep the acreage where they grow Ka`u Coffee. Also observing were representatives of The Nature Conservancy, who said they have an interest in preserving the coastal parcels.
Lehman’s bidding more than Olson does not mean the company had to put up money. It means that Lehman was willing to use credit towards the money it is owed to secure ownership of the property. Lehman bid $12,246,000.

The auction was part of the Lehman foreclosure on the Windwalker entities that borrowed $45 million from Lehman to develop the property, with the first subdivision to have been the lands where more than 30 farmers are growing their famous Ka`u Coffee and becoming successful entrepreneurs after many of them lost their jobs at the sugar company in Ka`u in 1996.
Windwalker and its representative Chris Manfredi were successful in convincing the county to allow Windwalker to subdivide the 2,000 acres on which the coffee growers farm some 380 acres into estate-type parcels, most of them under the 20 acres for which the land is agriculturally zoned. However, final approval would require millions of dollars in road and other infrastructure improvements. That opportunity could go to Lehman, while the coffee farmers say they hope the land where they farm will be set aside in long-term leases or as an ag park without subdivision of their orchards. Farmers said they need land security for their growing Ka`u Coffee business. Most of their long-term leases, left over from the old sugar company that used to own the land, have expired.
The lands went to auction as a bundle, but Lehman could choose to sell the parcels separately to varying interested parties once a judge reviews the auction, considers any last-minute bids in the courtroom and confirms the results.
Olson said yesterday that he is interested in the coffee not only for the farmers themselves but also for the coffee mill he built on Wood Valley Road. “We can buy all the coffee they can provide us,” he said. The foreclosure will be finalized before a judge who will allow additional bidding on the property.

PHOTOVOLTAIC PANELS TO BE CONSTRUCTED on eighteen three-acre lots with agriculture zoning in Hawaiian Ocean View Ranchos should cover one acre per lot, according to a story by Erin Miller for Stephens Media. Pat Shudak, CEO of Solar Hub Utilities, told Miller he expects work on the 250-kilowatt-hour project to begin within two or three months. The company is contracting to sell energy to Hawaiian Electric Light Co. for 23.6 cents per kilowatt-hour through its feed-in tariff program.
Some residents have expressed concern about the project, Miller reported. Ward Lambert, who said some of the lots have vegetation and mature `ohi`a trees, asked, “Are they going to bulldoze them?” He had previously said to The Ka`u Calendar, “Ag is green; tearing out trees is not green.”
Another concern mentioned is the probability that the lots will have chain-link fencing to protect the panels. Shudak told Miller he would use shrubbery and other foliage to mask the fences.
Regarding lack of communication about the project with the community, Shudak told Miller that he did try to contact a community association in the area, “but couldn’t get through to anyone.”
Several members of the Hawaiian Ranchos Maintenance Corp. and the Ranchos Association said that they had not been contacted, however at press time Hawaiian Ranchos Road Maintenance Corp. had begun negotiations with Shudak.
See hawaiitribune-herald.com.

KA`U RESIDENTS EXPRESSED SUPPORT FOR THE POLICE DEPARTMENT at a community meeting in Na`alehu yesterday. Lani and Bill Petrie, of Kapapala Ranch, noted that, with help they received from the police, they were able to reach a mediated agreement with trespassers.
The Petries voiced their concerns about night hunting, which is dangerous because hunters cannot be sure what they’re shooting at in the dark. Deputy Chief Paul Ferreira said the department is joining the Department of Land and Natural Resources in another hunter education program. Lani Petrie said it really helped the last time the program was used.
Another resident thanked the police for help in a dispute over land ownership. The resident said he had been issued a trespass warning when on land he thinks is his. An officer told him, “There’s nothing keeping you from filing suit against the other person if you think he is on your land” and that land disputes are settled in civil courts.
Discovery Harbour resident Harry McIntosh asked the officers what their main concerns are in Ka`u. Ferreira said agricultural thefts are of concern at present, although they have “slowed down.”
Ferreira brought up Chief Harry Kubojiri’s request that the County Council include five more officers for Ka`u in the upcoming budget, noting that Ka`u is one of the fastest growing districts in Hawai`i County. He said that would allow one additional officer per shift. Recruits would come from a class graduating in June. Kubojiri is also hoping to fill a vacant sergeant position in Ka`u.
Ferreira asked that people call with concerns and not wait until their next community meeting. He said they are always available to attend Neighborhood Watch and other meetings.
Community Policing Officer Blaine Morishita thanked residents for their cooperation, saying, “Ka`u is an awesome place to work.”

STORYTIME WITH AUNTIE JUDI is a new program at Na`alehu Public Library tomorrow and every Thursday at 10:30 a.m. Along with reading of stories and nursery rhymes, toddlers and preschoolers can participate in a simple craft. Call 939-2443 for more information.

FOOD SECURITY WILL BE THE SUBJECT of the PBS television program Insights tomorrow at 8 p.m. with Ka`u rancher Michelle Galimba, of Kuahiwi Ranch, on the panel.
Dan Boylan moderates and said that studies estimate that as much as 90 percent of Hawai`i’s food is imported, placing the islands at the mercy of shipping interruptions and natural disasters. Guests will explore what can be done to reduce Hawai`i’s dependence on imports and encourage local food production.
Also scheduled to appear are Shin Ho, farmer at Ho Farms; Lynette Larson, general manager of Kokua Market; and Fred Lau, aquaponics farmer at Mari’s Gardens.
Viewers can join the live discussion at pbshawaii.org or through Twitter using the #PBSinsights hash tag. 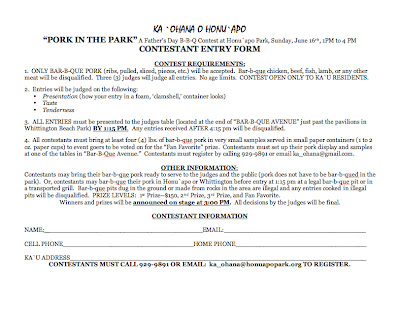 KA `OHANA O HONU`APO IS LOOKING for contestants to enter its special Pork in the Park event on Father’s Day. The barbecue pork contest will take place during a free family event at Honu`apo Park Sunday, June 16 from 1 p.m. to 4 p.m. Along with first-, second- and third-place prizes, the public will be able to sample entries and vote for the Fan Favorite. The event will also feature local musicians, shave ice for sale and a big tent to relax under.
“If you think you have the ‘chops’ to win this contest, or you know someone who can, please contact me,” said organizer Lehua Lopez-Mau. “We’re also looking for volunteers to help us set up and clean up.” Contact Lopez-Mau at 929-9891 or ka_ohana@gmail.com to register or for more information.

ALSO SEE KAUCALENDAR.COM AND FACEBOOK.COM/KAUCALENDAR.
Posted by The Ka`u Calendar at 12:32 PM Links to this post