SEN. DAN INOUYE’S REMAINS WILL COME TO HILO this Thursday, Dec. 27. The Afook-Chinen Civic Center will be the venue for a noon visitation and a 1 p.m. service.
Inouye is remembered by two Ka`u veterans who were members of the famed 442nd Combat Team in World War II. Iwao Yonemitsu and Toku Nakano, like Inouye, are both decorated heroes who served in Europe in battalions comprised of Japanese-Americans who not only fought for the U.S. but also for equality.
Inouye served in the Second Battalion, Company E. Yonemitsu served in the Third Batallion, Company L, while Nakano served in the Regimental Headquarters Company. Their slogan was Go for Broke!
Yonemitsu recalls that Hawai`i’s Japanese and mainland Japanese recruits were having problems with one another. Both Yonemitsu and Inouye were among those chosen to visit Japanese relocation camps on the mainland to help Hawai`i’s Japanese World War II soldiers empathize with mainland Japanese taken from homes and jobs and placed in relocation camps.
Both Inouye and Yonemitsu went to Arkansas, Inouye visiting Roher camp and Yonemitsu visiting Jerome camp. “The idea was to help the Hawai`i boys understand the tribulation of the mainland Japanese boys. The relationship improved after that,” said Yonemitsu.
After the war was over and Inouye entered civilian public service, Yonemitsu recalled, “I always supported Inouye because I thought he was a very good representative of the people. I think he was knowledgeable, in the sense that he knew what was required and where he should put his efforts.”
Said Yonemitsu, “Inouye could relate to the problems of various people from the lower to the upper class and of all races and cultures. Yonemitsu has another tie to Inouye. His neice, Barbara Sakamoto, who grew up in Na`alehu, worked for Inouye for 30 years in both Washington, D.C. and Honolulu.
Another 442nd hero, Toku Nakano, described Inouye as “a terrific man. I never heard of him complaining during his career. He was always trying to help others. He would never think of anything good for him, but always try to help the people and the community.”
The last time that Nakano and Yonemitsu saw Inouye was in November 2011, when the two of them traveled to Washington, D.C. to receive a Congressional Gold Medal. Inouye spoke during the ceremony.
An educator from Ka`u also remembers Inouye. Bill Derasin, owner of B&E Propane in Na`alehu, worked for 30 years teaching the trades at Hilo Community College. He said Inouye was a great help in supporting the purchase of facilities and equipment for education. He said he also helped to fund many programs for Native Hawaiians.
In relation to Inouye’s work for land preservation, including expanding the National Park in Ka`u, a statement from National Park Service director Jonathan B. Jarvis says: “Senator Daniel K. Inouye was a remarkable man and a special friend of the National Park Service.” Jarvis called Inouye “a champion of civil rights and social justice. His passion for those causes served as the foundation for his work to preserve hundreds of thousands of acres of historic, cultural and natural landscapes which are now cared for by the employees and volunteers of National Park Service for the future of Hawai`i and the United States of America.”
Yesterday, during Inouye’s service at the National Cathedral in Washington, D.C., Eric Shinseki, U.S. Secretary of Veterans Affairs and former U.S. Army chief of staff, said that Inouye led generations of Japanese-Americans into public service. Shinseki was born in Hawai`i of Japanese heritage. “I have had the broadest shoulders to stand on,” he said. “Aloha, Senator. Aloha and mahalo.”
In a statement, Shinseki said, “Sen. Daniel K. Inouye stood among the greatest of our Greatest Generation. Recipient of the Medal of Honor, our Nation’s highest award for valor; distinguished service as a long-serving member of the U.S. Senate; and role model to generations of Americans of Asian-Pacific Islander heritage, especially those growing up in his beloved Hawai`i, Sen. Inouye made public service a noble and honorable calling. Dan Inouye’s courage on the battlefield and in Congress, his passion for making a difference in the lives of average Americans, and his intense modesty spoke volumes about a remarkable American, who embodied the bedrock values and quiet virtues of our Nation. On behalf of America’s 22 million Veterans, I salute the memory of a brave man, a great patriot, a devoted public servant, an unwavering benefactor to Servicemembers and Veterans of every generation, and my friend and mentor. I extend my deepest personal condolences to the entire Inouye family.”

FIREFIGHTERS fought flames along Hwy 11 again last night between Honu`apo and Na`alehu near the 63 mile marker. A windy day fueled embers to reignite a fire that burned for hours and shut down a lane of traffic Wednesday night.

TWO ADMINISTRATORS FOR COUNTY PARKS & RECREATION, one in West Hawai`i and one in Hilo, are now on the job, according to the county website and a story in this morning’s Hawai`i Tribune-Herald. The arrangement means a swap in jobs, as Clayton Honma is the new director of Parks & Recreation, and former parks director Bob Fitzgerald is the new deputy director. According to Hawai`i Tribune-Herald, Honma said, “We still have the same leadership in place. We had some internal ideas.” Among the major projects involving Parks & Recreation is the new Ka`u Gymnasium & Disaster Shelter in Pahala, a complex costing more than $18 million. See more at www.hilotribune-herald.com. 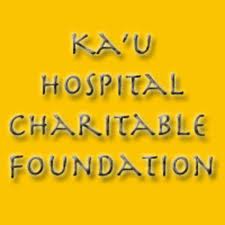 KA`U HOSPITAL CHARITABLE FOUNDATION’S scholarship committee is working to generate ideas for the upcoming year after raising more than $4,000 at its rummage sale and silent auction, said organizer Ursula D’Angelo.
Residents can donate HI-5 redemption monies to the Ka`u Hospital Charitable Foundation at any transfer station redemption center across the island.
The group is looking for people who would be willing to have donation jars in their places of business. The jars are decorated by residents of the hospital and have information about the scholarship fund.
Cookbooks, tote bags and T-shirts are available for purchase. Cookbooks are $15 each or $25 for a two-volume set. T-shirts are $15 each, and reusable totes are $3 each. “For the holiday season, we also have special edition handmade pot-holders and trivets available at two for $5 with the purchase of a cookbook or $3 each. All these items make lovely holiday gifts,” D’Angelo said.
KHCF is planning an online auction as well as a silent auction at its Fall into Christmas event on Sept. 21, 2013. Donations of antiques, collectible items, gift certificates, and Hawai`i-grown or made items are being accepted.
The scholarship committee welcomes community members to join in helping with future events. For more information or to suggest ideas for fundraising, contact D’Angelo at beautycallsursula@hawaiiantel.net.

YOUNG WOMEN WANTING TO BECOME Miss Ka`u Coffee contestants for 2013 are welcome to sign up for the competition by Jan. 15 for the spring pageant. Categories will be Miss Ka`u Coffee for young women ages 17 to 24 and Miss Ka`u Peaberry for girls ages 7 to 9. The winners will reign over the annual Ka`u Coffee Festival on Saturday, May 4.
Candidates must be age 17-24 by May 13 for Miss Ka`u Coffee. Candidates must be age 7-9 by May 13 for Miss Ka`u Peaberry. Pick up and drop off applications at R&G Store in Pahala, Pahala Community Center, Grandma’s Closet in Na`alehu and Kahuku Gift & Garden Shop in Ocean View. For more, contact Gloria Camba at 928-8558 or call Pahala Plantation Cottages at 928-9811. Organizers also welcome volunteers to help produce the pageant.

CANDLELIGHT CHRISTMAS EVE SERVICE begins at 6:30 p.m. at Na`ohulelua Historical Garden on Kama`oa Road on the grounds of the historic Catholic Church from the mid-1800s. Everyone is welcome at this non-denominational Christian celebration. Bring a chair and flashlight to walk the path to the ceremony. Space is limited. RSVP to 345-9374.

FIND MORE OF OUR DECEMBER 2012 EVENT PHOTOS ON OUR FLICKR ACCOUNT.
Posted by The Ka`u Calendar at 11:03 AM