A GEOTHERMAL HEALTH ASSESSMENT JOINT FACT FINDING STUDY will be initiated by the county, according to a press release issued from the office of Mayor Billy Kenoi this morning.
While geothermal expansion is most likely to be proposed for Kona and Puna, possible geothermal sites have been surveyed around the island with hot spots identified near South Point and between Pahala and Hawai`i Volcanoes National Park in the Ka`u desert.
The county statement says, “To help inform good decision making on the use of a (Geothermal Asset Fund with money collected from the geothermal producer) the county Department of Research & Development has contracted for an independent joint fact finding study to help lay the groundwork for future geothermal health studies to be conducted in the Puna community.”
The statement says, “The purpose of this effort is to collect the existing body of knowledge about documented health studies associated with geothermal operations, both here and around the world. The Joint Fact Finding effort will collect a range of existing information on air quality around the Puna Geothermal Venture plant and create a summary of kinds of health issues that community members believe may be linked to geothermal operations.”
The statement says that a Working Group will be convened by Dr. Peter Adler of Accord 3.0. “Dr. Adler is a nationally known and Hawai`i-based expert in the field of complex issue management and collaborative problem solving. He will be responsible for designing and implementing an independent fact finding process and for preparing an independent report due in February of 2013.”
“This joint fact finding process is an important first step toward addressing community health concerns in a responsible and independent fashion,” said Mayor Billy Kenoi. “We need to apply the best science available. That starts with the collection of existing knowledge on the topic and a reasoned and sustained conversation about what methods can best inform us all about any public health conditions associated with geothermal energy in our community.”


A DOUBLE-DIGIT LEAD is what a Civil Beat poll released yesterday says Mazie Hirono has over Linda Lingle in the race for the seat now occupied by U.S. Senator Dan Akaka. Civil Beat says the outcome is measured by the “first independent survey of the U.S. Senate race since the August primary election. The story at civilbeat.com says that “the Civil Beat poll shows Hirono, a Democratic congresswoman, with a 55 percent to 39 percent advantage over the two-term Republican Hawai`i governor. The survey of 1,684 likely general election voters was conducted between Sept. 26 and Sept. 28. The poll’s margin of error is 2.4 percent. Six percent said they were undecided.”
Lingle’s campaign team fired back soon after the poll was released, and Civil Beat posted the response from Lingle campaign manager Bob Lee: “The Civil Beat poll is just not credible. It was only two months ago that Civil Beat put out a glaringly inaccurate poll showing Ed Case winning the Democrat Primary for U.S. Senate. Their prediction was obliterated by the Election Day reality of Ed losing by almost 17 points. And, now, here they go again. It’s difficult to take these new figures seriously.”
According to the Lingle Campaign statement, this time Civil Beat tries “to explain away their past goofs by blaming the kind of voice they used to conduct the poll, but when they change voices they get the same bad results. Their methodology is so flawed that they get the same wrong result no matter what voice they use. They were substantially wrong in the Democrat Primary Election, and they will be wrong in this race by a lot. Our own internal polling is showing an incredibly competitive race with significant leads in key parts of the state and key demographics,” concludes the Lingle supporters.
Civil Beat reports that the Hirono/Lingle poll “also digs into education issues like furlough Fridays and the ongoing teacher contract dispute. It finds Hirono's lead was built largely with support from voters who don’t have kids in Hawai`i’s public school system. Of the third of respondents who said they have children who are either in Hawai`i public schools or attended public schools within the last 10 years, Hirono’s lead is only 48 percent to 45 percent — a statistical tie among that subset. But among the likely voters with no kids in school now or recently, Hirono’s advantage balloons to 59 percent to 36 percent.” See more at civilbeat.com.

HAWAIIAN VOICE, HAWAIIAN VOTE is the name of a campaign to get out the Native Hawaiian vote. Sponsored by the Office of Hawaiian Affairs, the promotion involves radio, TV, social media and print ads, with such celebrities as football star Kealoha Pilares and singer Lehua Kalima. OHA’s CEO Kamana`o Crabbe said: “We are attempting to empower young Hawaiians to become allies for the changes they want to see in their community. For that reason, we are putting a lot of effort into defining for Hawaiians their stake in voting. There’s mana (power) in our voices, and if we all channel our mana, we can be a force.” The election is Tuesday, Nov. 6. The last day to register is Monday, Oct. 8.


TOURISM HAS “BEEN GANGBUSTERS,” since January, according to Joseph Toy, CEO of Hospitality Advisors. His report says the islands started growing tourism successfully again about two years ago, following a steep decline in 2008 with the recession. The sharp increase this year could lead to a record number of visitors topping 2006, the banner year.
The number of visitors who came to the state in August was ten percent above last August, according to the Hawai`i Tourism Authority. Visitor spending was up 14.6 percent in August over the same month last year.
The first six months of this year saw visitors spending $9.59 billion in Hawai`i, which could mean almost $14 billion by the end of the year.

HAWAI`I ENERGY is providing another round of free, energy-saving light bulbs, this time exclusively for small businesses, including restaurants. The purpose is to cut electric bills and reduce the carbon footprint each qualifying business leaves on the island and the planet. See ahwaiienergy.com/151 for the plan. 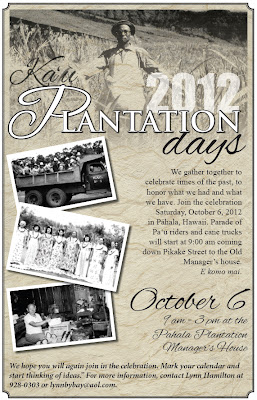 VOTE FOR YOUR FAVORITE ARTWORK this week at Ka`u Chamber of Commerce’s art show and contest for The Directory 2013 at CU Hawai`i in Na`alehu. Hours are 9 a.m. to 5 p.m. today through Thursday, 9 a.m. to noon on Friday and 9 a.m. to 11 a.m. on Saturday. The adult winner of the popular vote will be featured on the cover of The Directory 2013. All first-prize winners will appear inside with appropriate credit given.

KA`U PLANTATION DAYS is coming up in Pahala this Saturday, Oct. 6. Cane haul trucks and pa`u riders travel down Pikake Street to the manager’s house, with displays, photos, storytelling, food and dance from 9 a.m. to 3 p.m. For more information, contact Lynn Hamilton at 928-0303 or lynnbybay@aol.com.