ED CASE AND MAZIE HIRONO brought their campaigns to the Big Island with both candidates describing their differences at public meetings. Last Thursday, Case workers threw a party at Aunty Sally’s Lu`au House in Hilo, and yesterday Hirono spoke to supporters in a meeting room at Kilauea Lodge. Hirono said she has the experience in Congress to work across party lines and distinguished herself from Case by saying she would have voted against the Iraq war, while Case said he would have voted for it, given the information available at the time. Hirono noted that the National Democratic Party endorses her and has sent her around the country with other women senatorial contenders as they try to fend off a Republican effort to win four more seats to take over the Senate. Hirono said she voted against extending the Bush tax cuts while Case voted for it.
Whether Hirono could beat former Gov. Linda Lingle is a question Case supporters brought up at his party, noting that Lingle has defeated Hirono in the past. With Case seen as a centrist Democrat and sometimes as a “Republican in disguise,” he could beat Lingle, his supporters contend. Hirono said that electing Case would be electing someone who works outside the Democratic Party. She also said she is the best candidate to protect Social Security, health care and to stimulate the economy through research and development on food and energy sustainability and other programs. Case noted his many community meetings during his term in Congress when he often returned to Ka`u and met with the public, taking down individuals’ concerns and getting back to them. Hirono said she also works on many issues brought to her by individual citizens as the sitting Congresswoman. The primary election is Aug. 11.

THE BATTLE WILL BE CLOSE as eight candidates compete to represent Congressional District 2, according to political scientist Neil Miner, quoted in this morning’s Honolulu Star Advertiser. The District covers all of Ka`u and Volcano as well as all Neighbor Islands and rural O`ahu. Candidates from the Big Island are Democrat Bob Marx and Republican Kawika Crowley, both of Hilo. The other Republican in the race is Matt DiGeronimo, a retired Naval officer and financier on O`ahu. The other Democrats are former Office of Hawaiian Affairs advocate Esther Kia`aina of Nanakuli, Honolulu attorney Rafael del Castillo and Miles Shiratori of Kane`ohe, as well as the two candidates leading in the polls, who live on O`ahu. They are former Honolulu mayor Mufi Hannemann and Honolulu County Council member Tulsi Gabbard. The polls show them neck and neck, with Hannemann raising the most money and Gabbard coming from behind with a strong surge over the last month. Hannemann is running on his record, his education and experience in business and government, while Gabbard is running on the idea that Hawai`i needs fresh ideas. She also touts her military and community service background.


STATE REPRESENTATIVE DISTRICT 3 candidate Marlene Hapai visited Pahala yesterday, bringing her message of “Putting People First.” She talked about her “dreams for our district and our state,” including economic recovery and jobs, improved educational opportunities, increased agricultural opportunities and addressing important health and safety issues. Hapai said she plans to engage the community in determining its wants and needs in the way of jobs. She also said she wants to make higher education more affordable and accessible by “bringing the campus to the people.” Greater collaboration of various agricultural groups could lead to an increase in federal dollars for state ag programs, she said. Improving highway safety and vog monitoring are also on her agenda.
Residents brought up concerns about basic services during the meeting. One resident mentioned the lack of public restrooms in Pahala, noting that, when recent fires closed Ka`u Hospital, there were no public facilities available.
Another resident questioned limited hours at the transfer station.
When a resident brought up publicity that recent fires brought to Pahala, which “nobody thinks about,” Hapai responded, “Maybe this is a good opportunity” to bring attention to the area. 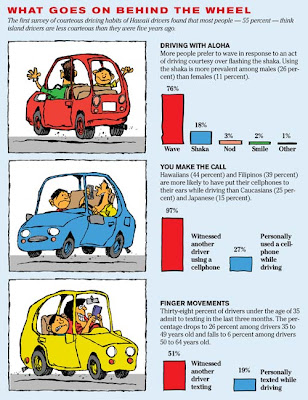 THE SHAKA “may be disappearing on Hawai`i’s roads as a way to say thanks to a courteous driver,” according to a Dan Nakasone story in this morning’s Honolulu Star Advertiser. The story refers to a survey by QMark Research in Honolulu, showing 76 percent of respondents preferring a simple wave of the hand instead of the shaka to show gratitude toward another driver. The survey was conducted as part of the new campaign Take the HI Road, sponsored by First Insurance Co. of Hawai`i and online at www.ficoh.com/takethehiroad.
The campaign includes an effort to save the shaka. According to the First Insurance statement, “All of us need to make driver courtesy a priority in order to improve safety and traffic flow on our roadways. In short, how we drive matters. When we’re courteous to other drivers, chances are they’ll return the courtesy and spread the goodwill to others. Imagine how much time courteous driving will shave off our commutes and how much better we’ll feel when we get to our destinations.”
The survey showed 55 percent of respondents thinking drivers in Hawai`i are less courteous than they were five years ago, particularly on O`ahu, where 58 percent said drivers are less courteous than five years ago, compared with 49 percent on Neighbor Islands.
The survey showed, however, that 89 percent either strongly or somewhat agreed with the following: “If I show someone courtesy on the road, they are more likely to be courteous to someone else.”
According to the Nakasone story, First Insurance “hopes to make courtesy on Hawai`i’s roads infectious.” First Insurance employees will carry signs that say “Drive with Courtesy,” “Bring Back the Wave” and “No Need to Speed” to emphasize the importance of courteous driving — hoping that drivers spread the message through social media. The survey also shows drivers upset about being cut off, lack of turn signal use and discourteous driving habits.

MILOLI`I LAWAI`A `OHANA CAMP, sponsored by Pa`a Pono Miloli`i in conjunction with Conservation International and the Hawai`i Fish Trust, begins Wednesday. Held at Miloli`i Beach Park, it is for three nights and four days and concludes Saturday. Camp coordinators Kaimi Kaupiko and Lei Kaupu will focus on three species which they feel are paramount to preserving Miloli`i’s resources: pakukui, opihi, and limu. Students will experience a biological fish monitoring project, mo`olelo - stories about the three species, hula, fish alkaline pond restoration - a hike to Honomalino Bay, cross net demonstration and a community lu`au for everyone. For more information, contact: Kaimi Kaupiko at 937-1310 or  Lei Kaupu at kainoa_12@hotmail.com.