THE PUBLIC UTILITIES COMMISSION is asking `Aina Koa Pono to present proposed pricing for biodiesel it would sell to Hawaiian Electric Company over the next 20 years. The biodiesel would be manufactured in a refinery between Pahala and Wood Valley and would be trucked along Hwy 11 to the power plant near Kona Airport to replace fossil fuel. Hawaiian Electric Light Company and Hawaiian Electric Company have asked the PUC to approve the contract as well as the ability to raise rates to pay for the biofuel to cover the contract that would run from 2013 through 2032.

The PUC asks for a comparison of pricing that adjusts for the difference in heat produced by fossil fuel with the projected heat that would be produced by the biodiesel at the power plant. It also asks for the heat-adjusted price to be compared with projected world oil prices. The official U.S. government energy statistics from the U.S. Energy Information Administration show a wide ranging forecast for oil prices over the next 20 years. The EIA projects that by 2032 oil could sell for as low as $50.09 per barrel or as high as $198.36 a barrel, making the projected average $124.28 per barrel. `Aina Koa Pono claims that as prices of fossil fuel rise, its biofuel price could become a bargain, even though the initial price would be higher.
Opponents, including farmer and attorney Ron Self of Wood Valley, contend that the PUC and Hawaiian Electric should be looking for less expensive sources of energy, that do not take agricultural land out of production.
`Aina Koa Pono representatives have been meeting with residents in small groups and attending community group meetings to explain their plan and promise jobs for the community. Tonight, they meet with ‘O Ka’u Kakou. ‘Aina Koa Pono will hold its first public meeting since February on Monday, Sept. 19 at Pahala Community Center at 6:30 p.m.

NO KA`U OR VOLCANO POST OFFICES are at risk of closure in the US Postal Service’s proposed downsizing in Hawai`i. Congresswoman Mazie K. is calling for the public to give its input in community meetings and surveys on closing post offices of Uptown Honolulu, Kapolei on O`ahu, Kalaupapa on Moloka`i, and Hanama`ulu on Kaua`i. Some 3,700 post offices nationwide may close to reduce its ballooning deficit. The USPS recently announced that it is unable to make a $5.5 billion payment into a fund this month, but that services and worker pay would be unaffected for now.

THE NOMINATION OF CHRIS MANFREDI for County of Hawai'i Windward Planning Commission is up for confirmation at the County Council Planning Committee meeting today. He was nominate by Mayor Billy Kenoi. If approved by the Planning Committee, the nomination goes before the full County Council for consideration. Manfredi, who serves on numerous community boards, represents a hui that owns 6,000 acres in Ka`u and plans to subdivide the land where most of the Ka`u Coffee Growers Cooperative members have created their farms and produce their award winning coffee. Manfredi said he plans to protect the farmers so they could continue farming around houses that could be built after the coffee estates are sold. Coffee farmers have been invited to today’s council meeting for recognition for their achievements in winning awards for their excellent coffee.

THE KA`U COMMUNITY DEVELOPMENT PLAN STEERING COMMITTEE will meet next Tuesday, Sept. 13, at 5:30 p.m. at Pahala Community Center. Items on the agenda include the introduction of new consultant staff to the committee, a project update by CDP manager and County planner Ron Whitmore, and a discussion on recent community outreach events. Discussion on proposals to the CDP project will not be covered in the meeting. 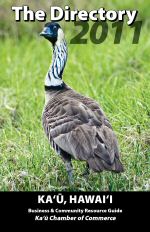 ARTISTS CAN COMPETE for the cover of the next Ka`u Chamber of Commerce Directory by bringing their art to the Ka`u Federal Credit Union in Na`alehu on Saturday, Sept. 24 from 9:30 a.m. to 11:30 a.m. Artists are to provide the name of the piece, the size, price and artist’s name. Entries are limited to one per person. Art can be in any medium. Three cash prizes will be awarded at the End of Show Celebration on Saturday, Oct. 1 at the Credit Union from noon to 2 p.m. For more information, call Wanda Aus at 929-9139.

THE KA`U TROJANS GIRLS VOLLEYBALL TEAM beat St. Joseph Cardinals on Tuesday. The Trojans won 3 of 5 games at St. Joe’s gym in Hilo. The home team started out strong, beating the Trojans in the first game. The Trojans recovered, however, and won the following two and final game.

THE FIRST TROJAN FOOTBALL home game this season is Saturday, Sept. 10, against Hawai`i Preparatory Academy at the Ka`u High School field. Game time is 6 p.m. Ka`u will play volleyball in Kohala at noon on Saturday.
Posted by The Ka`u Calendar at 10:36 AM