THE NATURE CONSERVANCY, with most of its Big Island preserves in Ka`u, has newly acquired land to oversee farther north. The nonprofit was gifted 7.5 acres valued at $6.5 million at Kiholo Bay in North Kona. The land was donated by Angus Mitchell, son of John Paul Mitchell and heir to the family hair care company.
Paul Mitchell had a long history in Hawai`i, having started creating hair products from the Hawaiian Awapuhi shampoo ginger found here. Paul Mitchell Systems grew into a salon training company and major hair care products manufacturer.

The Kiholo Bay property is covered by two large, interconnected freshwater spring-fed pools which contain habitat for native species such as hapawai (mollusk) and `opae (shrimp). The ponds are connected by a 200-foot-long `auwai, or stone channel, to Kiholo Bay, which is rich with marine life and has a resident population of green sea turtles, which use the inland ponds to feed and rest.
The parcel hosts threatened, migratory shore birds and abuts Kiholo State Park and a few small private landholdings. It is a culturally important site to native Hawaiians, especially those who continue to live in the area and trace their ancestry back to the land. The area remains under the stewardship of the nonprofit group Hui Aloha Kiholo, said TNC executive director Suzanne Case.
Ka`u properties owned by TNC include the Kamehame Bay turtle preserve, Kaiholena and native forests around gulches between Kapapala and Na`alehu. The main office for TNC on the Big Island is located on Hwy 11 in Na`alehu. 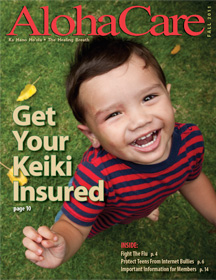 BAY CLINIC, which operates in Na`alehu and will soon start building a new clinic there, has received funding for its diabetes initiative and Chlamydia screening from AlohaCare’s Quality Improvement Incentive Program.
In the last two years AlohaCare has funded more than $3 million for childhood immunization, well-child visits, and improving access to care. Eligible projects are closely monitored for achieving goals through pay-per-performance measurements. John McComas, CEO of AlohaCare, said the incentives program for the clinics is “more than a pay-for-performance rewards program. It’s designed to help these centers and clinics create their own sustainable quality improvement programs that will, over the long term, help them operate more efficiently and achieve better results in terms of keeping their patients healthy. This is especially important in these tough economic times when health centers and clinics are experiencing increased patient demand, declining reimbursements and increased health care costs.”
AlohaCare, a nonprofit, is the third largest health care plan in Hawai`i. It has 75,000 members and provides coverage for those enrolled in Quest.


LOCATION OF THE CELL TOWER on Maile Street in Pahala has drawn some comment. Dr. Robert Domingos wrote the cell tower developer Crown Castle USA, saying:
“To construct a tall, ugly cell tower right on the highway at the beginning of town is ludicrous! The nearest buildings are historical plantation era beauties lovingly restored and used by the community. What are you thinking? Any place above town, upslope, out of sight, would give wider cell coverage and be much less obtrusive. Crown should reconsider the location of their planned 130-foot cell tower.”
Other questions include whether the tower could be disguised to look like a tree and whether there are any health risks to people living nearby.
The monopole would be 120 feet tall before putting on the antennae and 130 feet tall with the appurtenances. The company says it would be painted dark green “as coordinated with the county Planning Department.”
Crown issued a legal notice in The Ka`u Calendar newspaper in December saying it “invites comments from any interested party on the impact of the proposed tower on any districts, sites, buildings, structures or objects significant in American history, archaeology, engineering or culture that are listed or determined eligible for listing on the National Register of Historic Places.” The deadline is this Friday, Dec. 30. Comments should be addressed to Monica Gambino at 2000 Corporate Drive, Canonsburg, PA 15317 or monica.gambino@crowncastle.com or by phone at 724-416-2516. The company’s regulatory advisor for the project is Janice Merritts, who can be reached at 480-735-6931 or janice.merritts@crowncastle.com.
The proposal was also submitted to the county Planning Department. Earlier cell tower proposals for Pahala were mauka of the town. 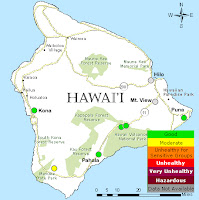 A HEAVY DOSE OF SO2 VOG blanketed Ka`u this morning. Pahala experienced more than three hours of air rated unhealthy for sensitive groups. During this kind of air, health officials recommend that everyone avoid outdoor activities that cause heavy breathing or breathing through the mouth. There were 15 minutes of air rated unhealthy when health officials recommend that everyone avoid outdoor activities and stay indoors.
Ocean View experienced more than five hours of air unhealthy for sensitive groups. Most of the very bad air was before dawn, and most people were sleeping.
The County of Hawai`i and engineering and architectural firm Mitsunaga & Associates are designing a $16.9 million regional disaster shelter and gymnasium for Pahala where residents could retreat during sustained periods of unhealthy air.
See the SO2 index at http://www.hiso2index.info/?siteid=22106

COUNCIL MEETINGS will be held in Hilo until contractors for the new West Hawai`i Civic Center finish their work, according to County Council chair Dominic Yagong. The audiovisual system, which allows the public and county employees to participate in Council meetings remotely from Hilo, Waimea and Kona, is inoperable at the new facility and has cost the county an extra $6,000 using a portable system. Other problems include overheating in some rooms, requiring design change, according to a Nancy Cook Lauer story in West Hawai`i Today. The county charter requires at least one meeting per quarter in Kona. Yagong told the reporter that bringing the problem to the public by canceling the West Hawai`i meetings could help get the contractors moving. The county administration is also retaining final payments on the project until it is finished.

VOTE FOR THE BEST DRESSED cottage at Kilauea Military Camp through Saturday, Dec. 31. This is the third year that KMC employees have put up holiday lights and decorations for the enjoyment of the community and visitors. Park entrance fees may apply.
Posted by The Ka`u Calendar at 9:50 AM Links to this post