BRENDA FORD was sworn in as the District 6 member of the County Council yesterday. Serving her fourth land last term as a Council member due to term limitations, she told The Ka`u Calendar that she will concentrate on infrastructure, such as new water wells for remote communities along the south Kona coast, for new waterlines and additional wells to serve the Ka Lae area and will follow the construction and opening of the new Ka`u Gymnasium & Disaster Shelter, which is getting underway this week by fencing of the construction area with a barrier to protect the school grounds and neighbors.

MITCH ROTH was sworn in as County Prosecuting Attorney. Roth promises more problem solving and community work in preventing crime. He won the general election with a narrow victory over Lincoln Ashida.

MAILE DAVID took the post of deputy county clerk yesterday. A legislative researcher, she accepted the new job after narrowly losing her bid for County Council, which would have made her the representative for Ka`u, Volcano and South Kona. David is known for her land use litigation to preserve culturally significant places and parks.

JAMAE KAWAUCHI, who left the county clerk position, was praised by outgoing County Council chair Dominic Yagong, who said that naming her county clerk position was the best decision he has ever made. Kawauchi is expected to go back into private practice as an attorney. Yagong, who lost the Democratic primary to Mayor Billy Kenoi, was described by Council member Brenda Ford as “the most courageous Council member ever.”

BRITTANY SMART, who declined to run for re-election as District 6’s County Council member and lost in a race for the state House of Representatives, was praised by incoming District 6 Council member Brenda Ford. Ford called her the most intelligent person she has met.

MAYOR BILLY KENOI celebrated his re-election last night at the former C. Brewer Wainaku Executive Center on Hilo Bay, which is being renovated to become an event venue and visitor destination by Olson Trust. A supporter of Kenoi, Pahala resident and retired police officer Bobby Gomes led the crowd in a toast and cheer. Fireworks lit up the sky above the historic building. Kenoi thanked all of his supporters and talked about the citizens across the island working together for a better future. On hand were many of his department heads, including Wally Lau, who will be the first county managing director with his main office in Kona. 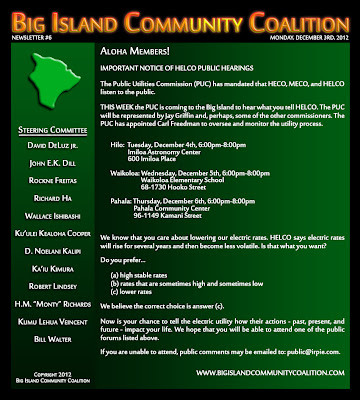 BIG ISLAND COMMUNITY COALITION is urging community members to come to this Thursday’s Hawai`i Electric Light Co. public meeting of its Aloha Advisory Board at Pahala Community Center from 6 p.m. to 8 p.m. The organization, which opposes the `Aina Koa Pono project planned for land between Pahala and Na`alehu with a refinery off Wood Valley Road, states: “This week the PUC is coming to the Big Island to hear what you tell HELCO.... We know that you care about lowering our electric rates. HELCO says electric rates will rise for several years and then become less volatile. Is that what you want?” The Coalition states that its members believe that citizens would prefer lower rates. “Now is the chance to tell the electric utility how their actions - past, present, and future - impact your life. We hope that you will be able to attend.” Those unable to attend can email comments to public@irpie.com.
Meetings outside of Ka`u are being held tonight at 6 p.m. at `Imiloa Center in Hilo and Wednesday at 6 p.m. at Waikoloa Elementary School. See more at www.bigislandcommunitycoalition.com and www.irpie.com for the long-term planning documents being written by the electric company.

MORE TESTIMONY RECEIVED BEFORE LAST MONTH’S DEADLINE on the proposed contract for `Aina Koa Pono to sell biofuel refined in Ka`u to HELCO is on the Public Utilities Commissions website.

“I SUPPORT THE KA`U ENERGY FARM PROJECT,” writes Louisiana resident Geri Cuddihy, who has been hosting small meetings in Ka`u in support of `Aina Koa Pono. “Here are my reasons why:
“Point 1: The continuous microwave thermal catalytic depolymerization is proven technology. The technology works. We have a pilot plant in North Carolina that proves the process works. I visited the plant with my family.
“Point 2: Biodiesel is better than regular diesel. Power plants need to meet 2009 federal mandates to reduce carbon dioxide emissions. Biodiesel reduces greenhouse gases by more than 80 percent, it is less toxic than table salt and biodegrades as fast as sugar in water.
“Point 3: Ka`u Energy Farm will create new jobs that will pay well at union wages. We need jobs in Ka`u. The 2010 U.S. Census reported Pahala as severely distressed with 23.92 percent of people in poverty and net income Is at only 50.4 percent of the average mean income for the state of Hawai`i. For the sake of our children, support the Ka`u Energy Farm Project, too.”
“Point 4: Our Ka`u project will have ATEX certification, which means the system designed by AECOM engineers will be explosion-proof and earthquake-proof. In addition, vice president of TekGar, Douglas Van Thor, has previously explained to Ka`u residents that the Farady Cage is a metal cage that doesn’t allow microwave to pass through. The Farady Cage has ceramic covering the microwave retort first, followed by a steel covering. Furthermore, an insulated material like Nansulate Insulation will cover everything: for corrosion prevention, from Vog leeching, to being a chemical- and flame-resistant coating which insulates equipment and reduces energy costs. This will also insulate surfaces up to 400 degrees for both metal and nonmetal surfaces and reduce surface temperature for worker safety and lower energy consumption. The frequency of our microwave retort is the same as the microwave oven used in our homes.”

BIG ISLAND RESIDENT ANTHONY KENT OPPOSES the contract in his testimony to the PUC. “What I read was that AKP will be paid $200 per barrel of biofuel, and that the contract will last for 20 years. Oil prices have been volatile, but the 52-week high for crude oil is $109 per barrel, and the price today is $89 per barrel. I have read economic forecasts that project oil prices to reach $200 per barrel in 2035! Are the residents of Hawai`i supposed to subsidize the cost of the biofuels until oil prices catches up? Then, will a new contract be written to once again subsidize preferred fuel providers? It just seems like a strange coincidence.

“I read Richard Ha’s testimonial. He makes a very salient point: ‘Rising electricity rates act like a regressive tax - the folks on the lowest rungs of the economic ladder suffer the most. But it is worse; as electricity prices rise, folks that can afford to leave the grid will do so, leaving the folks unable to leave to assume more of the grid infrastructure cost.’
“I understand the desire and need for alternative fuel sources (and fully support thoughtful, appropriate measures). However, this AKP contract doesn’t seem to meet those criteria. Is $200 per barrel the cost of production? How can it be when it is fixed over 20 years? Will AKP’s production costs not change? What are the true benefits to the residents of Hawai`i? If my testimony makes me look uninformed, it’s because I am! I cannot support, and I request that you do not support this or any other power generation contract without more transparency (and) clear public communication. Such a long-term contract without the ability to adjust for appropriate pricing cannot be allowed. Residents may very likely end up paying more than we should. Conversely, AKP could run into a situation where the contracted rate does not cover their costs and they are out of business.
“What I have read regarding this contract does not make sense. HELCO can purchase fuel much more inexpensively, as-is. The contract is touted as being no-risk to ratepayers, but it does transfer a large portion of the risk to ratepayers. AKP does not have a clear plan for maintaining production levels once existing feedstocks are depleted. I urge you to not execute this AKP contract.”
To see more testimony and other documents regarding the proposed contract, visit puc.hawaii.gov/dockets. Docket number is 2012-0185.

STATE REP. RICHARD ONISHI PUBLIC INPUT meetings in Ka`u and Volcano have been scheduled for tomorrow through next Monday. Wednesday’s meeting will be at Volcano Art Center from 7 p.m. to 8 p.m. Sunday’s meeting will be at Pahala Community Center from 7 p.m. to 8 p.m. Onishi’s District 3 for the state House of Representative spans from South Hilo - there will be a meeting Friday at 7 p.m. in Hilo AJA Hall, through Kea`au - there will be a meeting next Monday at 7 p.m. at Kea`au Community Center and through Puna, Volcano and Pahala to Honu`apo. He defeated Brittany Smart in the Democratic primary and is organizing his legislative agenda and staffing ahead of taking office in January. His contact number is 808-586-6120.

PAHALA CHRISTMAS PARADE takes place on Sunday, Dec. 9 at 1 p.m. Community groups, businesses and others are invited to participate. Call 928-0808 to sign up.