KA`U COFFEE cherries are ripening and the harvesting season is expected to start full-bore in the next month. About a dozen farmers met at Ka`u Coffee Mill last night to size up prices, to talk about securing land to grow more coffee, and to hear the latest on the efforts to stop the coffee berry borer from devastating Ka`u coffee like it damaged Kona coffee.
Mayor Billy Kenoi talked to the farmers by phone, saying that the county is fully behind helping Ka`u coffee farmers with research, development and marketing. Ka`u coffee farmer Bull Kailiawa asked about land security, regarding property at Cloud Rest and Moa`ula now being held by Lehman Brothers, which foreclosed on the former owners of the land where most of the Ka`u Coffee farmers have their fields. The coffee farmers have no leases. The mayor said he would try to help.
Kenoi described the Ka`u coffee farmer story as the best success in agriculture on this island since he became mayor. Many of the farmers are displaced sugar workers who evolved from plantation workers  to owning their own successful businesses. When he asked what he could do, Kailiawa told the mayor, “Honu`apo,” referring to the community effort that succeeded in preserving the shoreline from development through private and public money that made Honu`apo a park.

When asked how much it would cost to establish an ag park at Moa`ula and Cloud Rest where farmers could have long-term leases, Ka`u Coffee Mill owner Ed Olson estimated, “$5.6 million.” Kenoi said that would be a bargain and that he wants to meet with the farmers on Oct. 1 to help them define a path toward land security.
The mayor also said he wants to make sure that Ka`u coffee is included in gifts from the island taken to other places when county officials travel. He gave the example of presenting mayors in Taiwan with gifts of Ka`u coffee. He said the coffee was much appreciated.
Ka`u Coffee Mill general manager John Cross presented a separate plan that makes some 350 acres – about the size of the Pear Tree and Moa`ula coffee lands - available to coffee farmers. The parcels, both mauka and makai of Wood Valley Road, are at elevations between 1600 feet and 1900 feet. They have been cleared of albesia trees, are ready to plant and will have irrigation. Leases are priced at $75 per acre for the first year, $100 for the second year and $150 for the third through fifth years. After five years, Cross said, the farms will be evaluated every five years. “We want to make sure the farms are in good, active cultivation,” he said.
Ka`u Coffee Mill representatives laid out the prices for the mill’s interest in buying coffee at $1.80 a pound for top grade cherry, saying the mill would meet or beat Kona prices throughout the harvest. The mill also promised to buy top grade parchment for $10.50 a pound. Cross urged Ka`u farmers to sell coffee only to those with Ka`u labels and to refrain from selling to Kona coffee buyers.
The mill also rolled out prices for its services, promising to work with farmers on its pricing, reducing the cost for pulping and washing from 25 cents to 20 cents a pound, with further discounts by volume. Other services include drying of wet parchment, with payment being 5 percent of the weight of finished product. Services also include dry milling, roasting and grinding, weighing and packing. Ka`u Coffee Mill also offers a program where farmers can buy fertilizer and pay back the mill in cherry.
Pepe Miranda, who helps farmers fight coffee berry borer, said it is more important than ever to prune and clean at the end of the season and to treat fields for the coffee borer that has done so much damage to Kona coffee and has found its way to Ka`u.

‘OUTRAGEOUS,’ TULSI GABBARD proclaimed this morning, responding to the inclusion of the Monsanto Protection Act in the resolution to keep the federal government funded.  Ka`u's member in congress said she takes issue with a rider on the measure approved by the Republican dominated House this morning: “Slipped into this critical bill." Gabbard wrote,  “the act, which biotechnology companies helped draft, allows them to ignore regulations and sell genetically engineered foods even after a court orders them to stop, or when there isn’t yet evidence the foods are healthy or environmentally safe.
“This is even bigger than our food, though," wrote the congresswoman. "Adding the ‘rider’ is a blatant effort by some in Congress to skirt judicial review, leaving Americans without recourse to air their concerns on something that could dramatically impact human health and the environment.
“We have to speak out now, before the vote on the continuing resolution to fund the government. Monsanto doesn’t belong in that bill.
“Monsanto undercuts efforts to strengthen consumer and environmental protections from genetically engineered crops. It’s simple, really: People deserve to know truthful, transparent information about their food.
“But supporters of Monsanto and their special interest benefactors disagree, which is why they’ve snuck this into an unrelated budget bill. If the other side wants to openly debate Monsanto, we can do that. But sneaking it in is wrong.
“Tell Congress: Remove the Monsanto Protection Act extension and allow judicial review to proceed,” Gabbard urged.
The Stop the Monsanto Protection Act campaign is co-sponsored by Sen. Jeff Merkley, Rep, Earl Blumenauer, and Rep. Krysten Sinema. The U.S. Senate is expected to reject the federal funding measure and send it back to the House. Both chambers must approve a measure by the end of the month to avoid a federal government shutdown.
OBAMA-CARE is one of the conditions of the U.S. House of Representatives measure that passed today to keep the federal government open through mid-December. Republican House member, Rep. John Culberson, of Texas, proclaimed: “ Today, the constitutional conservatives in the House are keeping their word to our constituents and our nation to stand true to our principles, to protect them from the most unpopular law ever passed in the history of the country- ObamaCare- that intrudes on their privacy and our most sacred right as Americans to be left alone,” reported Fox News.
Harry Reid, a Democrat and Senate Majority Leader, issued a statement, “I have said it before but it seems to bear repeating: the Senate will not pass any bill that defunds or delays Obamacare.”
If the Senate votes down the House bill, it will go back to the House, which would push the deliberation close to the government shutdown date of Oct. 1.
COAL FIRED ELECTRICAL PLANTS will be subject to tougher Environmental Protection Agency laws nationally, EPA Administrator Gina McCarthy announced yesterday during a speech at the National Press Club in Washington, D.C.
The last coal fire plant on Hawai`i Island was shut down on Dec. 31, 2004 at an old sugar company that made power from the sugar byproduct, bagasse, until it switched to coal after sugar shut down. The Hilo Coast Power Co. site in Pepeekeo is now under reconstruction by Hua Honua to produce electricity from burning biomass and selling power to HELCO. The other power plant that used coal on Hawai`i Island was Puna Biomass, which burned coal intermittently before it was sold by AMFAC to HELCO, which has not used coal at the site, according to HELCO.
The environmental impact of coal on Hawai`i Island has more recently come from coal burning plants in such far off places as China and India. The emissions include mercury, which is spewed into the atmosphere and falls into the Pacific Ocean. Mercury in the ocean, as far away from coal burning sites as Hawai`i, has led to high mercury levels in such fish as tuna, prompting health department recommendations to eat tuna only once a week and for pregnant women to refrain from consuming tuna and other fish that are high on the food chain.
The EPA director’s comments focused on climate change. McCarthy said yesterday that “The president’s Climate Action Plan calls on federal agencies to take steady, sensible, and pragmatic steps to cut the harmful carbon pollution that fuels our changing climate, to prepare our communities for its unavoidable impacts, while continuing to provide affordable and reliable energy for all.” The Daily Kos wrote that the “announcement, most of it leaked two days ago, was prefaced in her speech by an extensive, straightforward discussion of the realities of the environmental and health impacts of climate change surely must have set on edge the teeth of those who deny it is actually happening. Indeed, the opposition began immediately:
“Opponents of the new E.P.A. rule quickly vowed to take measures to stop it. Sen. Mitch McConnell, the Republican leader and a senator from coal-dependent Kentucky, promised to use his legislative skills to prevent the measure.”
McConnel declared the new EPA rules as “an escalation of the war on coal and what that really means for Kentucky families is an escalation of this war on jobs and the Kentucky economy.”

EIGHT MAN FOOTBALL players suit up tonight as Ka`u High Trojans take on Kealakehe at home at 6 p.m. Tickets are $6 for the public, $2 for senior citizens and free for all those with a school athletic card.


SUPPORT OUR SPONSORS AT PAHALAPLANTATION-COTTAGES.COM AND KAUCOFFEEMILL.COM. KA`U COFFEE MILL IS OPEN SEVEN DAYS A WEEK. 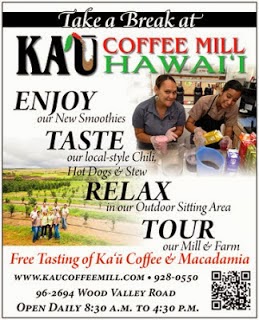 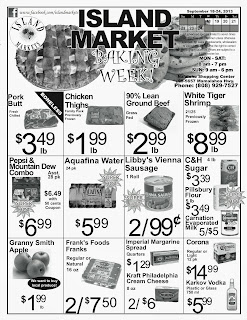 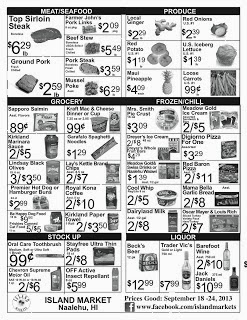