LEATHERBACK AND LOGGERHEAD sea turtles could be taken accidentally in larger numbers by the Hawai`i-based, shallow-set pelagic longline fishing fleets if a proposal by the National Marine Fisheries Service passes.
The federal government issues 164 longline permits, and about 25 to 30 vessels are active, mostly going after swordfish, also called shutome and a`u, in the colder currents of Hawaiian waters.
The rules allow for the incidental entanglement and hooking of a limited number of endangered turtles without fines or shutting down the fishery for the season. Once the limit is reached, however, the federal government closes the fishery for the rest of the year. Such rules that allow limited taking increase cooperation between conservationists and the fishing industry and have led to such innovations as installing turtle excluder devices in fishing nets.

The limit on loggerheads and leatherbacks was set by Fisheries in 2004 to a maximum annual accidental taking of 16 leatherbacks and 17 loggerheads for the entire Hawaiian waters fishery. However, Fisheries now proposes increasing that limit to 26 leatherbacks and 34 loggerheads per year. When a similar proposal was approved in 2008, the community groups KAHEA, Turtle Island Restoration Network and the Center for Biological Diversity sued the federal government. The court rejected the increase and set the limit for taking the endangered turtles back to the 2004 level.
The comment period on the newly proposed increase in the limit is open through July 11. Opinions can be mailed to National Marine Fisheries Service regional administrator Michael Tosatto, 1601 Kapiolani Blvd., Suite 1110, Honolulu, HI 96814-4700. Email through an online form at regulations.gov, where the proposed rules are identified as NOAA-NMFS-2012-0068.

ED CASE AND MAZIE HIRONO are tied in the race for the U.S. Senate seat that would represent Ka`u. A Civil Beat poll released today shows each with 46 percent, from a survey of 731 voters taken statewide between June 5 and June 7. Both Case and Hirono have provided support to the decade-long effort to preserve the Ka`u Coast, resulting in federal funding during both their terms in Congress. Hirono also supports the idea of a biofuel plantation and refinery in Ka`u to provide alternative energy production for the rest of the state, according to her letter posted on the website of the creators of the project, `Aina Koa Pono. Her letter says, “I am excited that `Aina Koa Pono is leading the way to making this goal a reality for the islands.”

THE COST OF SHIPPING GOODS to Hawai`i will drop slightly for customers of Matson container vessels. The company announced yesterday that it will reduce its fuel surcharge from 45.5 percent to 42 percent on June 17 due to the drop in the cost of bunker oil. The reduction is 3.5 percent, but follows a five percent hike in February.
Surcharge changes are allowed by the state Public Utilities Commission to reflect the ups and downs in fuel prices. Separate from the fuel surcharge, Matson also won a price increase in January of $225 per shipping container, further increasing the cost of shipping goods between the mainland and Hawai`i. A written statement from Matson says that “escalating energy costs have impacted all businesses, as well as consumers this year, with transportation companies especially hard hit.”

BRANDY SHIBUYA and her  family are back from Honolulu after Brandy won the Children’s Miracle Network competition last weekend in the Miss Hawai`i Pageant. Said Brandy, “We went as a family from Ka`u, deeply rooted in our culture, values and community to compete for the Miss Hawai`i title, and we came home as a family from Ka`u.” She placed in the top ten in the Miss Hawai`i Pageant, the precursor to the Miss America Pageant, and continues her reign as Miss Aloha Hawai`i. “Winning the Children’s Miracle Network award was the most heartfelt moment because it was presented by Cody, our Champion child, and his father,” said Brandy. “I really devoted my time toward contributing to the foundation to help our sick and injured children here in Hawai`i. I made miracles happen, and so can you! It’s the best feeling in the world.” She thanked the Ka`u Coffee Pageant committee for hosting the event where she became Miss Ka`u Coffee, the committee for the Kona Coffee Pageant where she won Miss Aloha Hawai`i and the team from the Miss Hawai`i Pageant, as well as many sponsors including the Edmund C. Olson Trust II. “It wouldn’t have been possible without the support from my family, friends and community. Thank you Hawai`i, Big Island and Ka`u for believing in me!”

A HALF-MILE OF SHORELINE at Manuka Natural Area Reserve offered up 500 pounds of marine debris, including 200 pounds of derelict fishing nets at the latest Hawai`i Wildlife Fund Cleanup. Nineteen volunteers combed the shoreline around `Awili and Humuhumu Points. Jenn Randall and the NARs crew joined in this third annual cleanup. Volunteers were from Hawai`i Island and as far away as South Africa and Thailand.
Megan Lamson of Hawai`i Wildlife Fund also reports that the removal of “heaps of non-native plant species and sediment from in and around the Ho`onoua anchialine pools during the past six months. The small volunteer groups are nearly done with the sediment removal in the largest pool and will be shifting gears to sediment removal in the second pond during July. “If you’d like to help with the ‘muck sucking’” or Seashore paspalum pulling, sign up in advance for the Ho`onoua Anchialine Pools Workday on Wednesdays, July 11 and July 25. RSVP to meg.hwf@gmail.com for more information. Space is limited.
Hawai`i Wildlife Fund volunteers from Ka`u are helping the Surfrider Foundation in Hilo this weekend for their International Surfing Day cleanup event. See https://www.facebook.com/pages/Surfrider-Foundation-Hilo-Chapter/213691888646842 or contact James Kuriyama at jkuriyama@hawaii.edu.

The next Ka`u beach cleanup will be Saturday, July 14. Volunteers meet at Wai`ohinu Park at 7:45 a.m. with sturdy footwear, sun/wind protection, bag lunch, snacks, refillable water bottle, “and a smile,” said Lamson. Four-wheel-drive vehicles are needed. Sign up with Lamson at 769-7629 or kahakai.cleanups@gmail.com. 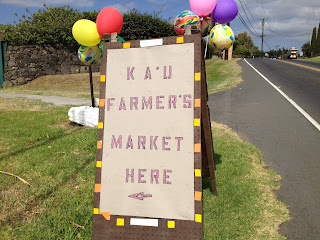 KA`U FARMERS MARKET begins its second week at Shaka Restaurant in Na`alehu tomorrow at 8 a.m. Shaka general manager Rory Koi offered the grounds after the market was shut down without notice from Ace Hardware following a customer falling on the grounds there.

SUPPORT OUR SPONSORS AT PAHALAPLANTATIONCOTTAGES.COM AND KAUCOFFEEMILL.COM.
Posted by The Ka`u Calendar at 10:22 AM Links to this post