FEDERAL JUDGE DERRICK KAHALA WATSON on Thursday ordered the U.S. government to allow entry into the country of those refugees from the six Muslim majority countries, previously denied by the Trump Travel Ban, who work with a U.S. resettlement agency. He also ordered permitting U.S. entry to grandparents and grandchildren, brothers-in-law, sisters-in-law, aunts, uncles, nieces, nephews and cousins of those already approved for entry into the U.S.
Hawai`i Attorney General Doug Chin, who asked Watson's federal District Court for the decision, said that it “makes clear that the U.S. government may not ignore the scope of the partial travel ban as it sees fit. Family members have been separated and real people have suffered enough,” Chin said.
However, the Trump administration filed an appeal with the U.S. Supreme Court on Friday night and asked the Ninth Circuit Court of Appeals for a hold on Watson's ruling on Saturday. The Trump appeal states that Watson's ruling “empties the court’s decision of meaning, as it encompasses not just ‘close’ family members, but virtually all family members. Treating all of these relationships as ‘close familial relationship(s)’ reads the term ‘close’ out of the Court’s decision.”
Trump administration attorneys also contended that neither Watson nor other federal district judges can rule on the travel ban, arguing that only Supreme Court has the means to rule in this case. “Only this Court can definitively settle whether the government’s reasonable implementation is consistent with this Court’s stay,” says the appeal.
Travel Wire News reports Becca Heller, director of the International Refugee Assistance Project, a resettlement agency, saying, "Watson’s ruling could help more than 24,000 refugees already vetted and approved by the United States but barred by the 120-day freeze on refugee admissions. Many of them had already sold all of their belongings to start their new lives in safety. This decision gives back hope to so many who would otherwise be stranded indefinitely.”
According to Travel Wire News, "Citing a need to review its vetting process to ensure national security, the administration capped refugee admissions at 50,000 for the 12-month period ending Sept. 30, a ceiling it hit this week.       "The federal budget can accommodate up to 75,000 refugees, but admissions have slowed under Trump, and the government could hold them to a trickle, resettlement agencies say."
Speaking about the Hawai`i federal judge's ruling, Travel Wire News also quotes Melanie Nezer, spokeswoman for HIAS, another resettlement agency, saying, “Absolutely this is good news for refugees, but there’s a lot of uncertainty. It’s really going to depend on how the administration reacts to this.”
U.S. Attorney General Jeff Sessions said, “Once again, we are faced with a situation in which a single federal district court has undertaken by a nationwide injunction to micromanage decisions of the co-equal executive branch related to our national security. By this decision, the district court has improperly substituted its policy preferences for the national security judgments of the executive branch in a time of grave threats.”

NEW MAP REVEALS HISTORY OF MAUNA LOA VOLCANO'S NORTHEAST FLANK. The
new Geologic Map of the Northeast Flank of Mauna Loa Volcano, Island of Hawaiʻi is the culmination of many years of work by Hawaiian Volcano Observatory geologists. It was recently published by the U.S. Geological Survey. The work was spearheaded by John P. Lockwood (affectionately known as "Mr. Mauna Loa"), who is now retired from USGS and HVO, and Frank Trusdell, HVO’s current Mauna Loa Project geologist.
Volcano Watch, written weekly by USGS scientists at Hawaiian Volcano Obeservator, writes:
For the northeast region of Mauna Loa, this updated map supersedes the “Geologic Map of the Island of Hawai‘i" (1996) and the “Geologic Map of the State of Hawai‘i" (2007).
Encompassing 440 square miles (1,140 sq km) of the northeast flank of Mauna Loa, the new map comprises an area equivalent to the islands of Moloka‘i and Lāna‘i combined. The mapped area extends from an elevation of 10,880 feet (3316 m) to sea level, from Pu‘u‘ula‘ula (“Red Hill”) on the southwest to Hilo on the northeast.
Mauna Loa, the largest active volcano on Earth, is known to have erupted 33 times since written descriptions became available in 1832. Some eruptions were preceded by only brief seismic unrest, while others followed several months to a year of increased seismicity. Since 1832, seven eruptions occurred within the area covered by the map: 1852, 1855–56, 1880–81, 1899, 1935–36, 1942, and 1984.
The Northeast Rift Zone (NERZ) of Mauna Loa is about 25 miles (40 km) long and 1.2–2.5 miles (2–4 km) wide. It narrows at Moku‘āweoweo, the volcano’s summit caldera, but becomes diffuse (3.4–4.3 miles, or 6–7 km, wide) down rift near Pu‘umaka‘ala Cone, about 7.4 miles (12 km) west of Mountain View. The rift zone is marked by low spatter ramparts and spatter cones as high as 197 ft (60 m).
Eruptive fissures and ground cracks cut volcanic deposits and flows in and near the crest of the rift zone. Lava typically flows from the NERZ to the north, east, or south, depending on vent location relative to the rift crest. For instance, during the 1880–1881 eruption of Mauna Loa, flows initially traveled south towards Kīlauea, but later, northeast towards Hilo.
Although most of the NERZ source vents are more than 19 miles (30 km) from Hilo, one branch of the 1880–1881 flow nearly reached Hilo Bay. In fact, Hilo is built entirely on lava flows erupted from the NERZ, most of them older than 1852.
The map shows the distribution of 105 eruptive units (flows)—separated into 15 age groups ranging from more than 30,000 years before present to 1984 CE—as well as the relations of volcanic and surficial sedimentary deposits. The color scheme adopted for the map is based on the age of the volcanic deposits. Warm colors (red, pink, and orange) represent deposits from recent epochs of time, while cool colors (blue and purple) represent older deposits.
From the geologic record, we can deduce several facts about the geologic history of the NERZ. For example, in the past 4,000 years, the middle to uppermost sections of the rift zone were more active than the lower section, perhaps due to buttressing (compression) of the lower northeast rift zone by the adjacent Mauna Kea and Kīlauea volcanoes.
Other interesting tidbits gleaned from the new map include: The Hāla‘i Hills near Hilo High School are 15,000- to 20,000-year-old eruptive cones from Mauna Loa, which are among the oldest geologic units found in Hilo. The lava flow at the top of Rainbow Falls is 10,000 years old! The largest flow in the map area is called the Pana‘ewa picrite, an olivine-rich lava flow that erupted from a vent near the Kūlani Correctional Facility, and which, at the coast, extends from Hā‘ena (Shipman Estate property) through Keaukaha to Mokuola (Coconut Island). 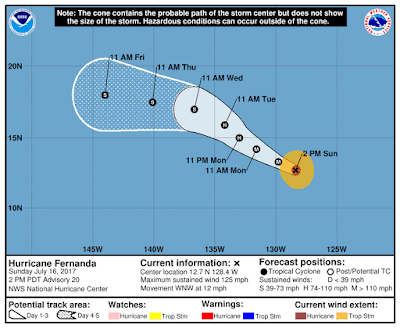 The geologic map provides fundamental information on the long-term eruptive behavior of Mauna Loa Volcano. In addition, it offers a valuable foundation from which collaborative studies in geology and biology can be launched.
The map can be viewed or freely downloaded from USGS Publications at https://doi.org/10.3133/sim2932A.

CATEGORY FOUR HURRICANE FERNANDA was moving west-northwest at 2 p.m. on Sunday, after a strengthening eyewall replacement,  but is expected to weaken to 40 miles an hour or less before reaching Hawaiian waters on Friday or Saturday.
The Major Hurricane, with winds of 125 mph, continues to move at 10 kt near the southwestern periphery of a mid-level high pressure system centered over the southwestern United States. The National Hurricane Center reports that its "track forecast philosophy remains unchanged from the past several advisories. A trough to the northeast of the Hawaiian Islands is expected to erode the
western portion of the ridge during the next few days. This pattern change should cause Fernanda to slow down and gain more latitude than it has in previous days. The trough is expected to lift out later in the week allowing the ridge to rebuild to the the north of the tropical cyclone in about 4 days. This should cause Fernanda to turn back toward the west in the four-to five-day period. The models are in good agreement on this overall scenario, and the NHC track forecast is near the middle of the guidance envelope."

National Hurricane Center reports that "the hurricane is still over warm water and in a favorable atmospheric environment, and it is forecast to remain in those conditions for another day or so. Therefore, little change in strength is expected in the short term. After that time, however, cooler waters, drier air, and an increase in wind shear should cause Fernanda to steadily weaken" into a weak tropical storm or depression by the time it reaches the Big Island.

Finian's Rainbow continues its run at Kilauea Military Camp's Kilauea Theater next Friday and Saturday at 7:30 p.m. and Sunday at 2:30 p.m. Tickets are $20 general, $15 for seniors 60 plus and students and $12 for children 12 and under, available at the door. For more information or to make a reservation, contact KDEN at 982-7344 or kden73@aol.com.