HAWAI`I INTERNATIONAL MUSIC FESTIVAL, the kernel of the idea beginning in 2009 with a concert for Ka`u Coffee farmers, students and villagers brought here by Amy Shoremount Obra of the Rusty's Ka`u Coffee family, has grown into a flurry of events this summer.
This year brings a rare concert to Pahala Plantation Mangers House on Wednesday, Aug. 16 at 7 p.m. to help support efforts to honor the history of Pahala through preservation of its historic sites. The artists also perform in Hilo and Honolulu. The music ranges from opera to tango.

The Pahala concert will feature:  Obra who is a New York Metropolitan Opera Soprano and daughter-inlaw of Lorie Obra of Rusty’s Hawaiian Coffee, Virtuoso Violinist Eric Siilberger, Esteemed Pianist Carlin Ma, Hawai`i Symphony Orchestra Cellist Sung Chan Chang, Mexican Tenor Manuel Castillo, Young Artist Mexican Mezzo-Soprano Sandra Aldaz Meraz, and World Renowned Argentinean Bandoneon Player JP Jofre.
The concert brings attention to the adjacent 60 acres at the old sugar mill site, which  is now on the county Public Access, Open Space and Natural Resources Commission list for acquisition. It is the location of the sugar wall, an old store and the old bank which is now the Hawai`i Public Radio station building. In addition there is an effort to conserve one of the oldest houses in town, the Lupunui House. An ad hoc group of Pahala citizens advocating for protection of these historic sites is called the Pahala Historic Properties Alliance.
To help bring awareness to Pahala's history, Shoremount Obra and her musicians will offer an evening of diverse music, performing on Argentine bandoneon, piano, violin and cello, with tenor and soprano voices. The concert begins at 7 p.m. at Pahala Plantation House. See http://himfpahala.bpt.me

REPORTED SIGHTINGS OF AXIS DEER have been shared on The Ka`u Calendar facebook page over the last 24 hours, following the announcement of elimination of the axis deer by the Big Island Invasive Species Committee. The organization urges anyone with any knowledge of seeing the invasive axis deer to call either 443-4036 or 933-3340.
Goats, sheep and sometime spotted horses in the distance are mistaken for axis deer. However, every sighting is valued by the BIISC team continuing to search for any axis deer that could remain, after years of making sure they are gone from the island.
On The Ka`u Calendar facebook, William Midgle reported seeing one a year ago in the Kahuku forest reserve. Candy Casper reported seeing one less than two years ago in Discovery Harbour.
The axis deer were introduced to the island by hunters, ranchers and a helicopter pilot illegally. Over the past six years, game cameras and human watchfulness have helped keep them out of the countryside. The deer are considered a danger to agriculture and nature as they compete with native wildlife and destroy farms and orchards.
The last confirmed sighting, according to BIISC, was in April of 2012 when the fourth deer was killed by a marksman, within a year after the first sighting on Hawai`i Island. 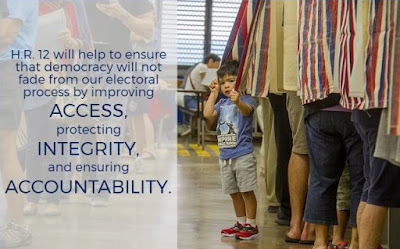 TODAY MARKS THE ANNIVERSARY OF THE VOTING RIGHTS ACT, "but defense of our democracy continues to be at risk of being, undermined," says a statement issued by U.S. Rep. Colleen Hanabusa, of Hawai`i.
The Voting Rights Act prohibits racial discrimination in voting, which is guaranteed by the Fourteenth and Fifteenth Amendments to the U.S. Constitution. It became law during the Civil Rights Movement, signed by Pres. Lyndon B. Johnson on Aug. 6, 1965.
Hanabusa said that earlier this summer she joined veterans of the Civil Rights Movement, voting rights advocates and leaders in the U.S. House to sponsor H.R. 12, the Voter Empowerment Act, "to protect voting rights and preserve our electoral system."
She said the bill will "modernize voting registration, prohibit deceptive practices and voter intimidation, and authorize assistance for states to protect the security of voter information and processes." She urges citizens to join the campaign: "Please stand with me as I call on my Republican colleagues to reject any effort to make it not just harder, but nearly impossible to vote. While many states are taking action to make voting even more difficult, I cannot, I will not, sit idly by while people are denied one of their most basic constitutional rights."

Posted by The Ka`u Calendar at 8:41 PM Links to this post